Samuel Fuller had a long, prolific career, and influenced some of the most important independent filmmakers of our times. Here are 10 of his best films.

Samuel Fuller's influence is seen in the works of many filmmakers, from French New Wave directors Jean-Luc Godard and Robert Besson to independent filmmakers Quentin Tarantino and Jim Jarmusch.

Fuller started his career in newspaper journalism at the age of 12 as a copyboy. By the time he was 17, he had worked his way up to crime reporter for the New York Evening Graphic. After volunteering for and serving in the First Infantry during World War II, he began writing pulp novels and eventually ghostwriting screenplays.

Although Fuller's films border on exploitation, his core values always come through. He was a man who believed in equality, integrity, and freedom for all, regardless of gender, race, or religion. By keeping his budgets low and his productions independent, he was able to discuss issues that were ignored by the mainstream.

House of Bamboo is a film about corruption in post war Japan. It stars Robert Ryan as Sandy Dawson, a racketeer taking advantage of the Japanese black market in the chaos after the war. Sandy recruits newcomer Eddie Spanier (Robert Stack) into his organization. However, Eddie might not be who he appears to be.

This is one of Fuller's greatest films, featuring an excellent performance by Robert Ryan, an actor who is mostly remembered for playing villains in Crossfire, The Wild Bunch, Billy Budd, and this film. In reality, Ryan was a dedicated humanitarian, and helped to form the civil rights groups Artists Help All Blacks and The Committee to Defend Martin Luther King.

Fuller's movies tend to show things from a dark perspective, but Park Row is the exception. An unabashedly sentimental account of a newspaperman named Phineas Mitchell (Gene Evans) who, after being fired from large newspaper The Star, starts his own publication along with the help of his friends.

It's a stirring movie about the power of the press and of journalistic integrity, as Mitchell builds his newspaper into a popular publication by reporting the truth. His upstart paper is first dismissed by The Star, but when it becomes the most popular paper, the editor of The Star ruthlessly tries to run their rival into the ground.

Shock Corridor is one of Fuller's best loved pulp movies, with good reason. An ambitious reporter, Johnny Barrett (Peter Breck), gets himself institutionalized to investigate a murder at an insane asylum.

This movie is Fuller at his most surreal. The setting of the insane asylum allows him to talk about some very disturbing issues, including war, bigotry, incest, and nuclear weapons. Some parts are laugh out loud funny (for instance, when Barrett is sexually accosted by a group of women and inwardly exclaims, "Nymphos!")

14-year-old Tolly Devlin sees his father brutally murdered by members of the local mob, which sets him on a path of revenge. To get closer to a member of the mob, he becomes a criminal and serves time in jail, which allows him to ingratiate himself.

Driven by vengence, Devlin (Cliff Robertson) sacrifices personal relationships and plays law enforcement against the mob, becoming as ruthless and cold-hearted as the men who killed his father.

The Crimson Kimono is one of the best examples of Fuller's using pulp as his pulpit. In the film, best friends and police partners Detective Joe Kojaku (James Shigeta) and Detective Sgt. Charlie Bancroft (Glenn Corbett) investigate the murder of an entertainer. Their loyalty to each other is tested by their mutual attraction to one of the witnesses, Christine Downes (Victoria Shaw).

This film has many things that wouldn't seem out of place in a film made today, but must have seemed very ahead of its time. Working independently, Fuller was able to make a story with different races where race wasn't the primary focus.

This is a Cold War thriller that could only have been made in the 1950s. A subway pickpocket, Skip McCoy (Richard Widmark), steals the wrong wallet, and ends up involved in a government investigation of a Communist spy. It's a thrilling movie that seems very fast paced, even by today's standards.

This was one of Fuller's few films made for a major studio, and he got some excellent talent for the money, including an Academy Award nominated performance by the great Thelma Ritter.

One of my favorite things about this film is McCoy's house, a waterfront shack that wouldn't exist in modern-day New York. It's ramshackle and run down, and he has to cool his beer in the East River. Truly one of Fuller's best films, as far as acting and aesthetics go.

Fuller's first war film, and the first film about the Korean War, The Steel Helmet meditates on the meaning of war through the experiences of a ragtag group of infantrymen who end up together in a mission to set up an observation post in a Buddhist Temple.

While taking the temple, the soldiers capture and hold a North Korean major hostage. The major attempts to set the soldiers against each other, trying to make them question their loyalty to the United States, citing its racism and its inequality.

This is a short film, only 85 minutes, but it packs a lot of punch in its run time.

Trivia: the lead soldier nicknames a South Korean boy "Short Round," a name that Lucas and Spielberg paid homage to in the movie Indiana Jones and the Temple of Doom.

Constance Towers gives a powerful performances in this film about a prostitute who moves to another town to build a new life, only to find that her past is always at her heels.

The former prostitute, Kelly, is kind and generous, but also unsentimental. She finds work with handicapped children, and even though it's apparent that she loves the children and enjoys helping them, she doesn't coddle them. She soon catches the eye of the richest man in town, who is attracted to her tough love, or is it something else?

The movie is chaotic and unreal in places, and it deals with taboo themes with a sophistication not even seen in movies today. I can't recommend this movie highly enough. It's one of the best ways to get into the films of Samuel Fuller.

This is one of the best films about World War II ever made, and you can see its influence in later films like Saving Private Ryan and The Thin Red Line.

Based on his own novel, which in turn is based on his time with the First Infantry, The Big Red One features an excellent cast led by the great Lee Marvin, and including Robert Carradine, Kelly Ward, Bobby DiCicco, and Mark Hamill. Lee Marvin is the grizzled Sgt. Possum, who leads his troops from North Africa to Sicily, to the invasion at Omaha Beach, the liberation of France, and the invasion of Germany. It's an epic film, with a story told in Fuller's typical unblinking, unafraid style. The troops are not romanticized, they are shown as scared young men, pretending to be tough in the face of madness.

Probably Fuller's greatest movie, its message was completely misunderstood when it came out. Packaged as a Jaws-like horror thriller about a killer dog, White Dog was protested by the NAACP when it was released, due to the perception that it celebrated a dog trained to kill African Americans.

Actress Julie (Kristy MacNichol) accidentally hits a stray dog, and ends up taking him in. After a fruitless search for the owner, and a heroic rescue from a rapist, Julie decides to keep the dog, but during a fateful day discovers a horrible secret: the dog has been trained to attack African Americans.

In an attempt to rehabilitate the dog, Julie takes him to Carruthers and Keys, who train animals for the movies. Carruthers (the wonderful Burl Ives) doesn't see much promise in rehabilitating the dog, and worries that he will never unlearn his violent nature since it is ingrained in him. On the other hand, Keys (the brilliant Paul Winfield) believes that he can train the dog to stop hating people with dark skin, and commits himself to that purpose, vowing that if he fails, he will kill the dog himself.

Although problematic in a lot of ways, Fuller's conviction that racism is a learned, and not a natural, phenomenon, is the core of this movie, and the relationship between the dog and Keys is one of the most touching and best developed in Fuller's filmography. Paul Winfield is a terribly underrated actor, and this is possibly his best role. Like Fuller, he seems ahead of his time, an action movie star who lived in an openly gay relationship with his partner Charles Gillian Jr. 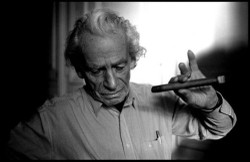