It was back in 1961 that The Avengers first came to television screens in the UK. At that time there was no Emma Peel in sight, as John Steed was in a partnership with Dr. Geoffrey Brent, played by the late Ian Hendry.

In fact, at this point, Hendry was the star of the show with Patrick Macnee taking second billing to the more well-known star. It would not be until the following year that the first of the Avengers girls arrived, when Cathy Gale, played by Honor Blackman, slipped on her leather suit and kinky boots.

She became what many consider to be the first independently minded female character to appear on television. Graced with the ability to handle herself on an equal footing with her male companion, she was the epitome of the early 1960s liberated woman.

Cathy continued to fend off all types of criminal activites against British interests for two years, until Honor Blackman was enticed into becoming the latest James Bond girl.

Perhaps the best loved and most remembered era of The Avengers was with the arrival of Emma Peel, played by the delectable Diana Rigg.

While the occasional black leather outfit survived the transition, the relationship between the two lead characters evolved into something altogether different from the previous partnership. There was a lighter feel, laced with humour and a powerful, visible chemistry between Steed and Mrs Peel.

As independent, beautiful and stylish as her predecessor, Emma wowed audiences around the world with her athleticism and prowess. Adopting karate skills, she was able to dispense with her opponents with the flick of a wrist or an adeptly placed kick. She was a character who all women wanted to become and about who all men fantasized.

After a two year stint, Diana Rigg decided to leave the series, and for many, the golden era of the show departed with her.

Enter Tara King, played by Linda Thorson. Of all the Avengers girls, Tara was the one who caused the most discussion and controversy amongst fans of the series. A much beloved character was now gone and how could an inexperienced 20-year-old actress ever replace her?

Admittedly it was a shaky start, but Linda Thorson soon put her own stamp on the role of Tara King, even if many still feel she was the downfall of The Avengers. As a younger partner, the relationship between she and Steed was light years away from that of both Gale and Peel.

Instead of an equality, what crept in now was a sense that Steed was adopting a fatherly role, always seemingly coming to the aid of Tara. While Miss King could look after herself, her fighting style was more likely thumping someone with a brick concealed in a handbag than a graceful kick to the unmentionables.

Her style lasted for thirty-three episodes until 1969.

With the end of the 1960s came the final curtain for The Avengers. Steed and Tara rocketed into space, clinking champagne glasses and marking the end of an era.

50 Years of a TV Classic

Links to The Avengers

The Avengers: 50 Years of a Television Classic

I am a big fan of this series. My favourite female lead is Diana Rigg-Miss Emma Peel. This is a change for me as I usually prefer the first-and I do indeed love the other "Bond girl" who was first -Honor Blackman. I just have this thing about diana Rigg where she is so cool I want to be her in The Avengers. And as I am Canadian I enjoy the third leading lady too-a fellow Canadian. (Have I mentioned I am in my thirties and feel like I was born in the wrong era for television?)

I loved the New Avengers and The Return of the Saint. Essential viewing growing up in the 70s

But I'm glad you didn't mention The New Avengers - it was about as good as 'Return of The Saint' with Ian Ogilvy. And as for the The New Avengers in Canada - words fail me. Joanna Lumley was the only good thing about them.

But overall Diana Rigg would have been my favourite lady.

I somehow missed this series. Maybe I can catch it in reruns.

the only avengers I know is Emma Peel. She was fantastic.

The Avengers has an amazing history. Bet the anniversary events are going to be really fun!

I thoroughly enjoyed the Avengers - great characters and engaging plots. 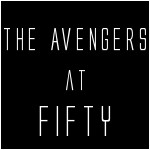