What to expect from boat trips from Phuket to Maya Bay, where the beach scenes from the film The Beach were shot.

There are many travel agents on the holiday island of Phuket, Thailand, offering boat trips to Phi Phi Island, where Maya Bay was used for shooting the beach scenes in the 2000 film The Beach. Steve Rogerson reviews one of the trips and provides some tips for holidaymakers who are planning such a journey.

Wander around the holiday island of Phuket, Thailand, and among the shops selling made-to-measure suits and massage parlours will be various travel agents offering boat trips to many of the smaller islands that surround Phuket. One of the most popular of these is the trip to Maya Bay on Phi Phi Ley, made famous as the shooting location for the beach scenes in the 2000 film The Beach, starring Leonardo DiCaprio.

There are various options available from the different tour operators as to what is included in the package, which other islands are visited, activities and food availability, and whether the journey is done as a sedate trip in a large boat or a bumpy journey in a speedboat. The trip reviewed here took the speedboat option.

We were picked up at our hotel in an air-conditioned minibus. Some operators will charge extra for this, so check first and if necessary shop around till you find one that offers this service for free. We were greeted at the pier with tea and biscuits and merged with other groups to form nearly 40 people who boarded the speedboat, which had the uninspiring name of On-Tour.

Boarding took slightly longer than expected due to being queued up in family groups for photographs, framed versions of which were on sale for 150baht at the end of the trip. Most tours do some version of this service, but if it something that is important to you, then check in advance. This particular tour also had someone videoing the event and a DVD was on sale for 1200baht at the end in which his footage was interspersed with previously filmed scenes. This was delivered to our hotel the day after the trip. Again, this is not available from every operator.

The journey started with a 45 minute trip to Maya Bay. This was very bumpy; we sat in the front where some of the bumps were literally spine jarring – it is better inside nearer the back, but arguably not as much fun. In the film, the beach and bay are deserted, but do not expect the same from what has now become a popular tourist attraction. We jostled with a number of other boats before coming to a halt and then wading through the sea onto the famous beach. We had time, just over half an hour, to look round – there are toilets and a snack bar – and have a swim in the sea before back on the boat. Some trips offer longer stays on the beach, so again ask around if that is what you want.

The journey then took us past Loh Samah Bay (some boats stop here for photos) and onto Pileh Lagoon and the Viking Cave, at both of which the boat did stop for photographs. Some trips do pull into the Viking Cave to let you explore. This really was used by the Vikings in the distant past but is now mostly a place for collecting birds’ nests for making soup.

The larger Phi Phi Don island was the next destination with the first stop being Monkey Beach. Our boat moored just off the sand, close enough for people to photograph the monkeys on the beach. Some boats let people off, but these are wild monkeys and they do bite, and if bitten a course of rabies injections is needed; this happened to someone staying at our hotel during the holiday.

On some tours, there are regular stops for snorkelling, so bringing your own gear can be handy, but many trips will rent the basics. Snorkelling was up next for us as we stopped off shore, donned life jackets and climbed into the sea. We didn’t actually snorkel, just bobbed about enjoying the warm water and seeing the fish swimming round our feet. Those on our trip that did put the gear on seemed to enjoy it.

Next we docked on Phi Phi Don for lunch (included in the price) before sailing for about 45 minutes to Khai Nok Island. Here again you can swim in the sea and snorkelling gear will help see the very colourful fish that come close to the shore. This area also has sunbeds for hire as well as souvenir shops and snack bars. Be careful of the pegs and ropes mooring the boats to the beach as they are easy to trip over.

And that was that – back on the boat, back to the pier and back in the minibus to the hotel. From start to finish was around ten hours, being picked up at 7.30am and dropped off around 5.30pm.

Prices for these trips vary wildly, with the speedboat option usually the dearest. One operator was charging over 4000baht for a similar version of the trip we went on, while the one we did take was advertised at 3000baht for adults and 1500baht for children. Most of the operators though will negotiate on price, and we bought ours for 1400baht each for two adults. This was run by On Tour Co Ltd and bought through Yuha Kim Tour & Travel on Kamala Beach.

While bringing a camera is obvious, it is a good idea to have some kind of waterproof covering. The same is true for any other electronic device, such as a mobile phone. Don’t forget to take a swimming suit and towel, though in the heat drying off is not normally a problem. What is necessary for most is sun block cream.

Wow Thailand is beautiful. You took some great pictures

A review of the boat trips from Phuket, Thailand, to Kao Tapu, known as James... 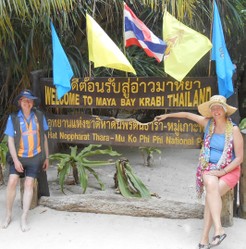 A look at the range of craft beers brewed at the Full Moon Brewwork microbrewery in Patong on the Thai holiday island of Phuket.
30%  1   4 SteveRogerson
Thailand 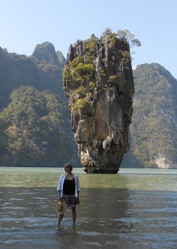 A review of the boat trips from Phuket, Thailand, to Kao Tapu, known as James Bond Island.
Loading ...
Error!