When I returned to Texas after almost 40 years, I discovered a tree growing nearby that had the strangest looking fruit. What the heck was it?

I've been interested in identifying plants for many years. I try to identify them for medicinal purposes, for food and for dye. Moving from one part of the country to another has made this a challenge, but one that is fun for me too. Some of my favorite plants, like stinging nettle, don’t grow in Texas, or at least, my part of it. There are many others that I had never seen, even when I was growing up here. One such plant is the bodark tree. 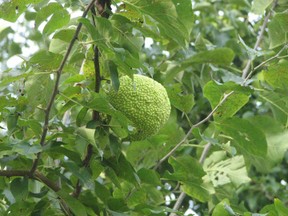 I first noticed the fruit of the bodark tree because of its strange appearance. It looks like a large tennis ball with warts. I brought one home and immediately looked online.

According to Wikipedia, this strange tree, Maclura pomifera, is commonly called Osage-orange, Horse-apple, Bois d'arc, Bodark, or Bodock tree. It can grow to 40-60 feet tall but often grows like a hedge along a fence line and is also called a hedge-apple. It comes in male and female varieties. Only the female trees will produce the fruit with its milky, sticky sap. 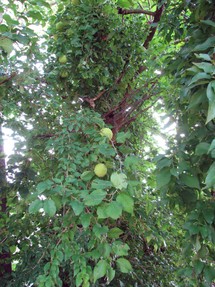 Despite its fruity sounding name, Osage orange, it is not related to the orange tree and is not edible except for the seeds. Some birds will eat the seeds once the fruit splits open and squirrels will shred them to get to them too. Most animals leave them alone but I read that cattle will sometimes eat them and choke if they don't chew them well.

The tree has shiny smooth leaves with formidable thorns. In the 1880’s before the invention of barbed wire, the bodark tree was used extensively as fencing. Thousands of miles of saplings were planted and the branches were woven together to be "horse high, bull strong and hog tight."  It was also used as a wind break in the prairie states. The wood is strong and withstands rot which made it popular as a wood for tool handles, wooden pegs, and fence posts.

The bodark got another name, bow-wood, from its use by Native Americans for war clubs and bows. In Arkansas, in the early 19th century, a good bow make from bodark was worth a horse and a blanket.  There are folks who still make bows with the wood and at least one guitar maker has experimented with it as well. The inner bark of the tree is a bright yellow and makes a yellow dye and the scaly outer bark is a source of tannin for leather.

It was an old-time tradition to place an Osage orange under the bed to repel spiders. Researchers have found that the oil in the fruit will repel some insect species as well as synthetic DEET. I ran my own experiment. I have a major problem with ants. I always have a line of them somewhere although I've cleaned and sprayed with vinegar which is supposed to kill the trail scent that the ants follow. Once it evaporates they are back on the trail. I rubbed a slice of the orange on the trail and the ants came to a screeching halt. They simply would not venture across the spot.

Some people also use the fruit for decoration. The lime green balls can be added to a centerpiece arrangement in a bowl. The fruit can also be sliced and dried. Even Martha Stewart has dried them around some crumpled tin foil to make dried flower arrangements. I've read of drying the slices and using to make pendants and other jewelry. I’ll have to experiment more with this.

Do you have a bodark tree?

It's a little early yet for the fruit. It won't be long though.

Yes, I have a large one on some property I just purchased. have not seen any fruit yet so I had a little trouble getting the tree identified.

No but I'd like to know where I can find one near San Angelo, Texas. Thanks for your help!

Shared this for #treetuesday via Google+.

They do have a lot of names. I think they were planted in the open parts of the country to act as windbreaks and fences and were known as hedge apples. East Texas is close to Louisiana and French speaking people who tended to call them by their French name which got turned in to Bodark or Bodock.

They're common in the midwest. I've seen them in Illinois and Missouri. We always called them hedge apples. I never knew of another name.

Thanks. I never saw one at all until a few months ago. They're easy to spot now with all the green fruit on the ground.

They're pretty common down here in Texas.

Some wild plants that grow in New Hampshire do not grow in Texas. I'll miss s... 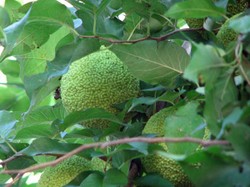 Hedges and Evergreens: A Complete Manual for the Cultivation, ...
65%  6   7 Ragtimelil
Weeds 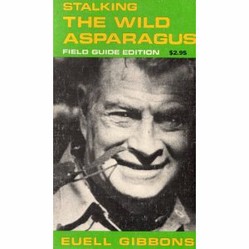 Some wild plants that grow in New Hampshire do not grow in Texas. I'll miss some of my old wild friends, but I'll be meeting new ones.
100%  25   35 DerdriuMarriner
Trees

New World native Eastern redbud is one of the first trees to flower in spring.
Loading ...
Error!