In 1970 Dr Lehr J. Brisbin discovered wild dogs living in the uninhabited forests of South Carolina. He had discovered what is called the American Dingo or the Carolina Dog.

People used to think that early man adopted wolves and domesticated them, breeding the dogs we have today. It is more likely that the dogs domesticated themselves, hanging around human dwellings, living on leftovers, joining in the hunt, and making themselves useful as an early warning system. 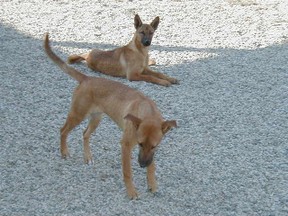 Wild populations of Carolina dogs have been found in the Southeastern forests on the US. They are a true landrace dog and share characteristics of the pariah dogs around the world - dogs that hang around humans but don’t belong to anyone, yet ready to accompany them on a hunting expedition. They are thought to be the first dogs in the Americas who journeyed across the Bering Straits with the first people thousands of years ago.

Dingos Around the World 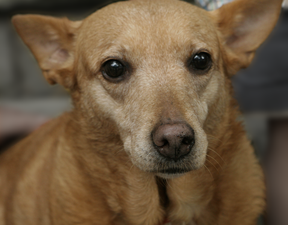 The Carolina dog looks like the familiar dingo of Australia and shares features with other Pariah dogs such as the New Guinea Singing dog and the Pariah dog of India. They are not feral domestic dogs, but dogs that have unique characteristics that set them apart from our domestic dogs. The Carolina dogs, like other pariah dogs, are usually ginger colored, medium sized, generally between 35 and 55 pounds. They have prick ears and a wedged shaped head with powerful jaws and intelligent eyes.

Photo on Wikipedia by Roregan

The Mexican hairless and the Basenji are just two of the breeds that were developed by humans but are old enough to also be considered primitive, but not a true landrace dog – one that developed entirely on their own.

Although the Carolina dog is now a recognized breed with several other registries (not including the American Kennel Club) they are self-developed breed. They were not selectively bred, but developed traits to help them survive in the environment in which they lived.

The females have a heat three times a year and the pack raises the pups communally. They are extremely clean and won’t eliminate near where they spend their time which makes them very easy to housebreak. They have a unique habit of covering their droppings. They dig what are called snout holes, small holes just big enough to stick their muzzle into. They dig these holes mainly from September through February. No one has yet figured out why they do this.

There are still wild populations of the Carolina dog and the breed is not considered fully domesticated. While some are being raised in captivity, they all need socialization at an early age. They are naturally shy around strangers but can learn to accept them. They need to be exposed to other animals so that they see them as part of the pack and not prey. Carolina dogs have a strong hunting instinct and should not be allowed to roam freely. They need a fenced area to run and play in. They do not make good kenned dogs since their pack instinct is so strong. They are reputed to be excellent family dogs, and great with children when raised with them.

Good books on how dogs were domesticated

Here are some thoughts about the best dogs for children by a dog trainer and groomer.
Loading ...
Error!