The folklore year - May - Beltane. The death of the May fair ?

The annual May Fair is an English tradition but are they dying out because the organisers charge too much, because people are too sophisticated or because of our English weather?

The Ancient Briton calendar made great importance of the official first day of the new seasons. The fire of Bel or Beltane welcomed Summer. Today we call it May Day and is still an important day in traditional folklore.

The Church tried to stop May celebrations because of its pagan connections but there are still remnants of May, Beltane, celebrations which continue today. May fairs, Maypole dancing, Crowning of May Queens are but a few examples. The Catholic Church introduced the crowning of Mary, Our Lady to supersede the ancient tradition of May Queen.

Last weekend, I went to a May Fair but it was a declining event from previous years, Is this because the organisers were charging too much, or because of our atrocious weather or are we just too sophisticated these days to acknowledge these traditions?
Maybe ... It was a combination of all these factors.

Strangely,  after years of decline and oblivion,  Maypole dancing is starting up again in some places.

Traditional British dancing is known as Morris Dancing and was a part of many May Day  ( 1st May ) and May celebrations .

Men dress in white shirts and with their white  trousers to their knees, with bells attached. They carry long coloured ribbons and sticks,  and dance to traditional music. Very few Morris dance troops exist today. The May Queen is another declining tradition. The Catholic Church has stopped the traditional crowning of the statue and local May parades with a girl chosen as May Queen don't happen any more.

Is this because we have become too sophisticated or because of disinterest?

This year's fair though lovely was smaller. On the day we visited, there were fewer stalls and more fairground rides, very few artisan food stalls . Maybe this was because it was so wet that the rain was bouncing as seen in the photo above.

The white vertical lines in my photo show the height that the force of the rain bounced up to.

The Wishing Tree was novel. We had to write a wish and hang it on the tree. This is probably a remnant of the Ancient British tree worship.

I wouldn't have expected to see Zorbing at a May Fair but it was a pleasing addition though.

Here was a wonderful stall!

A young man named Josh Galloway makes his own beautiful and quirky guitars at a very reasonable cost. Talented, humble and  nice-looking, he must have worked very hard to do all these.

Just look at these instruments and Josh himself.

Traditional stalls were sadly very few. This one hit the mark though and is what I would expect at a May Fair.

Charlie's homemade Fudge. Excellent home produce and a funny, friendly stall holder. Look at all that fudge in every flavour. Yummy!

I am a great believer in supporting local events and I hope that the May Fair is not so disappointing next year. I think the dreadful weather was a great influence on the day but that didn't affect the type of stalls and attractions though. A lot of work goes into it and it is excellent for the community to get together in this way.

Despite the Ancient British traditions having started over 2000 years ago, I am pleased that there is still evidence of their influence. They are part of our consciousness and who we and many other Ancient Brit descendants around the world are.

Yes it's a lovely time and we can still resect the old traditions . Every season has its beauty and I think we should acknowledge it.

I always wanted to experience this as a kid, I remember reading about it in books.

NO I haven't seen that film but it sounds very quirky and super talented. I like quirky tihngs and his guitars were just amazing.

Veronica, The Route 66 guitar makes me think of the Recycled Orchestra of Paraguay's instruments! Have you seen the film Landfill Harmonic, short-listed for the environmental award at the 2015 or 2016 Sheffield International Documentary Festival?

Integration is how it should be.

In Britain After Rome Professor Robyn Fleming cited an archaeological site in the Midlands where a British village was sited next to a village of Anglo-Saxon incomers.The graves were revealing. The first generation of incomers kept their distinct burial customs. These were the older people, but by generation three the differences had disappeared. It was one community.As she says"When the women of both villages have the same babies to coo over, you have a community."

That suggests that maypole dancing could be both Celt and Saxon. Excellent. What a remarkable page this has turned in to.

If you want to seek the German roots of English customs, look to the far north of Germany and Denmark. The Saxons came from Saxony in Germany, but the Angles from Schleswig-Holstein, then part of Denmark, and the Jutes, according to King Alfred, from the Danish island of Fyn. The Angles and Jutes were South Scandinavians, belonging to a broad group known as the Ingwine [ Ings, hence we are English.] You can read more of this in Beowulf and Grendel by Grigsby.

Tacitus says that the Angles, a tribe friendly to Rome, were one of the tribes dwelling on the Baltic coast who worshipped the goddess. So they brought her cultus to England with them when they migrated, and it almost certainly fused with similar cults in British society.

Thanks, both the article and comments including Frank's are very enlightening. This is indeed a place of learning.

Veronica is right on the term Celtic, which is a term that denotes language class rather than race. But the "Celts" and the Germans [including Saxons] had much religious culture in common, so maypole dancing could be both British [Celtic] and Anglo-Saxon.

Don't make the very common mistake of over-distinguishing Saxons and Britons [Celts/Welsh.] When the Saxons arrived they mixed very easily with the Britons. The Romans brought in Saxon troops [male] but the Saxons left descendants, but that fact needed British females to make it happen. Southern Brits are descended from Saxon men and British women to some degree. It was different in the North.from which I and Veronica come.

BSG, I recall that your ancestors came from the area inhabited by the British tribe, Atrebates, but that area became part of Wessex. However. Francis Pryor, an eminent, now retired British archaeologist, says that in the area from which your ancestors came there is no evidence of population replacement during the Saxon settlements, but that Saxon and British settled together quite happily. [See his book Britain AD.]

In the nineteenth century racial theory, which taught that the Germanic races were superior to others arose [we know where that led.] Thus certain British decided that to be truly Germanic and therefore superior we had to have no Celtic ancestors. As the Celts had dwelt in Britain ere the Saxons arrived they had to invent the belief that the Saxons were genocidal savages who murdered every Welsh [British] person who did not flee to Wales. Sheer poppycock! Much of Western England is more British than Saxon. Indeed Welsh was spoken across parts of Western England until the eighteenth century. Even as a boy I found this view repulsivea nd incredible.

Yesterday I visited a Medieval Hall for a Tudor medicine and cosmetics talk. ... 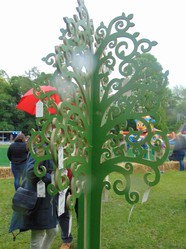 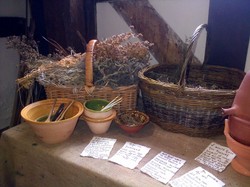 Yesterday I visited a Medieval Hall for a Tudor medicine and cosmetics talk. See how some things change and some things stay the same. :)
Loading ...
Error!