Fan loyalty, juicy script writing and curiosity have brought this record breaking series back for a fifth season.

The television series “The Game” seems to have 9 lives like a cat. The creator of the show Mara Brock Akil and heavy hitting producer Kelsey Grammar must be ecstatic to know they have a tremendous fan base; and they are very loyal. The show originally premiered on the CW network October 1, 2006; but after just three seasons the show ended up being cancelled despite decent ratings.  After a few years of re-runs being aired on B.E.T. (Black Entertainment Television) the series was resuscitated and negotiations between B.E.T.  and CBS (parent company) resulted in The Game starting a fresh fourth season on B.E.T.  The original cast was brought back and production started in Atlanta.  Now if that isn’t fan loyalty, I don’t know what is. How many T.V. series do you know are cancelled, ran in syndication and then brought back with the original cast. It just doesn’t happen very often. There is a reason for The Game’s resilience; the storyline is just so darn good.  Its fourth season return attracted 7.7 million viewers; which is a record breaker in the world of cable television.

Season five started with a bang on January 10, 2012. I was tuned in and tweeted up as I sat and watched the controversial episode. The Game is based on a fictional football team called the San Diego Sabers; and yes the show takes place in the city as well. The series gives viewers a glimpse of what it “can be” like to be the wife, girlfriend or lover of a professional athlete. I think that’s why the fans love it so much (me included) because the writers have taken super rich sports figures and given us their good, bad and ugly. It’s like The Young and the Restless meets ESPN, meets The Real World; seriously.  Not to mention the fact that the actors and actresses are eye candy for the majority of the human population. Mix in a few hot tracks in the background, steamy love scenes and all you want is “hush” in the room and a bowl of popcorn.

Catch The Game On Tuesday Nights

The main characters include a doctor played by Tia Mowry-Hardrict of Sister to Sister fame and her sexy wide receiving husband Derwin Davis respectfully played by Pooch Hall. The mixing, mingling and almost mauling of the characters as their lives collide together all for the love of the “Game” is a recipe that works.  Other main characters include Wendy Raquel Robinson, Coby Bell, and Hosea Chanchez. The chemistry between these actors is great both on and off the screen. I have watched several interviews with the cast mates and it seems like they genuinely love working together.

If you haven’t had the pleasure of watching The Game I won’t give too many more details; this show is something you simply have to experience for yourself.  The people have spoken, The Game is a hit and you can catch on it B.E.T. Tuesday nights at 9:00 CST. If you watch the show don't forget to tweet #TheGameBET 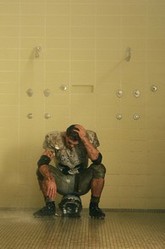