The Hardships of Interracial Relationships

We have come a long way in the area of racism and interracial marriage, but have we come far enough?

Interracial marriage has been a touchy subject for hundreds of years in or country and thousands of years across the globe. America has come miles from its former segregated self and even farther from the slave era that had become a thing of normalcy. Even still, we have so far to go. Interracial relationships are still a very surprising thing to see in our country even though by now it should be expected to be viewed as something of normalcy. For those who choose to engage in such relationships, it can be taxing to fight the amount of negativity presented by our society. Police brutality, residential segregation, misinterpretation in Hollywood and the media - these are blatant versions of racism and segregation that minorities deal with everyday. But what would happen if interracial couples got the same amount of support that these other issues did?

I am the product of the union between an African American man and a (white) German woman. From an early age I was taught to love both sides of me – the white and the black. I identify both white and black, but understand that when people look at me they see only a black woman. Still, I have never been ashamed of the skin I am in no matter what some people may think of me. I have had my fair share of dirty looks shot at me. The very first time that I experienced racism was when I was six or seven years old and my mom brought me to a playground. I remember very clearly the white mothers loudly voicing how they did not want their children to play with a black child. Minutes later, they gathered up their offspring and left the park. That was in the South. The North does not give you the luxury of voicing their opinions quite so loudly.

The North is a funny place. I lived in the South for half of my life and came to love the slower way of life, the alligators in my back yard, and the sweet tea that the North never seems to get quite right. Southern hospitality is a very real thing and is obvious in every interaction, from the cashier at the local Mom and Pop’s to the way people drive. Here in the North, living so close to Baltimore, D.C. and New York City, people just move so much faster. Everyone always seems to have somewhere to be or something to do. People don’t tend to make time to talk to strangers or even recognize their existence like they do in the South. I live in Maryland, and though it is below the Mason-Dixie Line which technically makes it a Southern state, I never considered it as such. I think it is because everyone is always hurrying around like busy little bees that the racism is not as noticeable unless you are on the receiving end of it.

Racism in the North is different than racism in the South. For one thing, I have seen more blacks responding negatively to me than whites. It is the dirty little secret amongst the African-American community that colorism is as big of a problem as it is. Earlier this year, the documentary “Light Girls” came out in order to address the side of colorism through the eyes of women of African-American descent. This documentary was created to be a sister of the critically acclaimed documentary, “Dark Girls.” It was supposed to be a positive thing, but as I perused the online discussion boards, I saw a good amount of hate against even the idea of having a documentary from this perspective. Many women whom one could assume were of darker color were upset that their lighter sisters had to take the spotlight again and take control of an area that they deemed as their own. Now, it is no secret that throughout history, lighter skinned women have been preferred, by both white and black men. This is not a problem unique to the U.S. as countries such as India and Japan have been under scrutiny by social media recently in retaliation to their unfairness to women with darker complexions. An example of this can be seen by the backlash received by Miss America winner Nina Davuluri who became the first Miss America of Indian decent to win. With whites being the symbol of beauty and success, black women have been deemed as more desirable the lighter they were. This can be seen in slavery times all the way to now, when lighter skinned women are still being chosen over their darker sisters in Hollywood, media, and the corporate world. The resentment that many darker women have against lighter women has most certainly stemmed from this along with the entitled attitude that some lighter women display against them. There is no one reason for colorism. It varies based on the person and the situation, but it is a problem that nonetheless exists, especially amongst black women, though black men are victims of it as well.

While I could talk all day about racism in America, there is one topic that I would like to focus on specifically. Interracial dating. As I mentioned before, I am a product of an interracial relationship. I have seen the hatred that my mother has received from black men who claim that she “stole their man” or hat she has no business raising their kids. Which is completely and utterly ridiculous and laughable. Aside from my sister and I , my parents have taken on three other African-American children – two boys and a girl. The girl is fourteen years old now, and is obviously in charge of doing her own hair on a daily basis. She is unfortunately incredibly lazy and as a result, her hair is not always neat and well kept. Because of this, black women often judge my mother (though she has no responsibility in my sister’s hair) and often remark how she can’t do her child’s hair because she is white. My mother receives remarks like this constantly. Thankfully, she is a very strong, intelligent woman and doesn’t let the comments get to her, but it is still upsetting to witness.

Knowing the heat that my parents get, especially from the African American community, I still decided to get into an interracial relationship. My boyfriend is white. Probably the whitest guy you can imagine actually. But he loves me with all his heart and I love him. Though we have only been going out for about half a year, we have received our fair amount of dirt looks – him especially. His looks come from black men who can’t seem to understand why we would be together. We mostly laugh at them and make sure we show just how much we love each other when we catch them glaring at him, but it is still unsettling. Not because we feel threatened, but because there are still people in this world who feel that interracial relationships are weird or wrong.

Last week celebrated the 46th year since Loving Day, or he day in which interracial marriage became legal in the United States. It’s a holiday which means a lot to me and I am a huge advocate for. I was bothered, however, by the lack of appreciation from some of the major black social media sites. For Harriett, a major advocate for the support of black women and feminism, was completely silent on the topic. Even #BlackTwitter, the Twitter handle for important news and advocacy of black rights preferred to rant over the latest gossip on the Rachel Dolezal scandal rather than make any mention on the day. “Black Love” is such a hot topic at the moment, but is there no love for those who prefer to venture outside the norm? Interracial couples are such a rare thing to see in the media that even I am taken aback when I see it happen. Just the other day I was watching television and the commercial for the Honest Company came on. The commercial featured a black man, his white wife, and their mixed daughter. It was shown in such a nonchalant way that I could not help but do a double take and mourn the fact that I did not have DVR on that particular television set. I loved seeing the representation of the interracial community portrayed in such a great way. The way for change to take place is not to shove it down people’s throats or force them to agree with our “agenda.” It is best to show the normalcy of it and let people become adjusted to it.

For it being 2015, it seems like we still have a long way to go when it comes to accepting races as equal. I would love to see this change one day. The world is changing a bit very day, so I look forward to what the future holds. I just want my future children to grow up in a world that accepts them for them, no matter the skin color. I wish that the issues that interracial couples face were given the same amount of support as the other issues in the African American community. I wonder how much change we would see then? 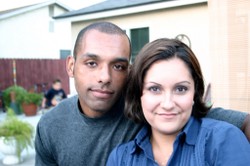