Sturdy enough for adults yet small and gentle enough for children, the Newfoundland Pony is a link to some now-extinct pony types once found in the British Isles.

Life on the island of Newfoundland was, and in some cases still is, based on subsistence farming and fishing. The first non-Native immigrants were the Vikings, who settled there briefly around AD 1000, but they were driven out by the native Beothuk people and they left no horses behind. A few European settlements began to emerge after 1600, but most residents were seasonal, living there only long enough to catch and dry cod to sell in Europe or to go whaling and sealing. Farming was not really part of the equation until the late 1700s, but those who did farm arrived in Newfoundland with ponies, sheep and cattle. After Newfoundland was recognized as a British colony in 1824, more immigrants started arriving from the British Isles (primarily from Ireland and Scotland). They brought Galloways and Highland Ponies from Scotland, a few Connemaras from Ireland, some Dartmoor, Exmoor, Fell and New Forest Ponies from England, and all four types of Welsh Ponies and Cobs from Wales. Today, the Galloway, a large pony or small horse 12 to 14 hands and similar to the Welsh Cob, is extinct due to crossbreeding with draft horses in its native Scotland, but its genes live on in the Newfoundland Pony and Scotland's rare Eriskay Pony.

Before modern mechanization reached Newfoundland, ponies were vital to the survival of those who lived off the land and the sea. The ponies provided transportation, both as riding ponies and by pulling buggies and carts. In the spring, the ponies were used for ploughing the small amount of arable land on the rocky island, and for gathering seaweed and the dead capelin (small fish) that washed ashore after spawning every spring from the beach at low tide and used as fertilizer for crops.

During harvest, ponies pulled mowers and hay rakes and transported hay, grain and vegetables in large-wheeled carts. In winter, the ponies pulled sleds (known as slides) and sleighs, and also were used for logging, both for firewood and in areas where larger draught horses were too big to be effective. In short, life on Newfoundland would have been almost impossible without the help of the sturdy and agile ponies.

For over 200 years, the harsh conditions of life in Newfoundland ensured that only the healthiest, soundest ponies survived. Since they were descended from sturdy stock to begin with, it is no surprise that the ponies actually thrived. Interbreeding of the mountain and moorland ponies from the British Isles over many generations with little or no introduction of other breeds resulted in a type of pony that was distinct to Newfoundland.

Since the colonists knew the value of their little horses and treated them with care, the Newfoundland Pony developed into a breed that was friendly and easy to train and work with. The ponies were thrifty, doing well on less food than required by full-sized horses.

Description of a Newfoundland Pony

All Newfoundland Ponies were solid coloured with few white markings, because there were no pinto or spotted ponies in their ancestry. Over time, the main colours became roan, black, bay, chestnut, dun, grey and even an occasional pink-skinned white (a colour that is now extremely rare). Many changed colour seasonally, and many had “mealy” markings on the muzzle and around the eyes.

Like other northern pony types, they had low-set tails, thick necks, narrow chests, feathered fetlocks, good bone and small, hard feet that seldom cracked or chipped. In winter, they grew very thick, harsh coats to protect them from the severe weather and cold winds off the North Atlantic.

Their teeth were set very deep into the jaw, which is characteristic of primitive equines. Their tails had a fan of hair across the base to help keep the snow and ice from building up. That, too, is a primitive characteristic found in the Przewalski's Horse of Asia and a handful of domestic horse breeds.

In size, they ranged from 12 to 14.2 hands (48 inches to 58 inches at the top of the wither). The smallest were two to four inches bigger than a large Shetland Pony, or about the size of a Welsh Mountain Pony, while the largest were the size of a Welsh Pony or medium-sized Connemara Pony.

Today's ponies remain unchanged, retaining all of their traditional characteristics and, in particular, the sweet temperament that remains a hallmark of the breed.

Meat Buyers Drive the Newfoundland Pony to the Brink of Extinction

Ponies used regularly for work would be stabled, but in summer, those not needed for work were allowed to roam free in herds. Instead of fencing in the ponies, residents fenced areas where they didn't want ponies to trespass, such as vegetable and flower gardens or fields of grain. This enabled the ponies to gather in herds, usually of around 20 animals, to find their own grazing and wander to new pasture as necessary, and the mares would be bred and have their foals in the wild. Generally, they stayed within a five-mile radius of the community where their owners lived.

The ponies were rounded up in the fall by their respective owners to be used for harvesting and fall and winter chores. The system worked well, and the population held steady at around 6,000 ponies for over a century. While the rest of Canada had long since become mechanized, there were still parts of Newfoundland where the ponies were being used daily. By the mid-1960s, there were an estimated 10,000 ponies in Newfoundland.

It was not to last. Gradually, ponies were replaced by tractors and other modern farm equipment, and people began travelling by car instead of on horseback or buggy. New anti-roaming laws prevented people from letting their ponies run loose in the traditional way.

When dealers arrived from Quebec in 1977 offering to buy large numbers of ponies for riding schools, many Newfoundlanders sold their ponies, thinking the animals would have a job to do and would be loved by children. But the buyers were lying. The price of horse meat had risen sharply, and the dealers were buying the ponies and sending them to slaughter to supply horse meat to Quebec and European markets. By the time word reached Newfoundland that these beloved ponies were being killed for meat, thousands had already been sold.

Fortunately for this native pony breed, this action saved the remaining animals. The government of Newfoundland and Labrador declared the Newfoundland Pony to be a Heritage Animal, and this helped raise awareness. Today, the breed is still critically endangered, with under 400 animals, only about half of which are breeding stock. An export permit is needed to sell a pony outside of the province of Newfoundland. Separate breeding herds have been established in parts of Newfoundland, Ontario and elsewhere to help ensure the survival of the breed.

In 2005, the Change Islands Newfoundland Pony Refuge was established in Newfoundland with just five ponies to begin a breeding program to help save the Newfoundland Pony. This refuge is located between Twillingate and Fogo Islands on Newfoundland's northeast coast, and since December 2010 has been owned and run by Netta LeDrew.

Newfoundland Ponies have been featured at the Royal Agricultural Winter Fair in Toronto and the Equus Survival Trust's Festival of Endangered Equines at the Kentucky Horse Park. In 2009, the Newfoundland Pony and the Canadian Horse, another breed that evolved in Canada, were featured on Canada Post postage stamps.

For more information, check out two books by Andrew F. Fraser: The Newfoundland Pony (published in 1992) and Founding Horses (1991).

Interesting, my cousin love horses, it's her life, going to forward this to her.

Great article! Sad they are not yet recognized! 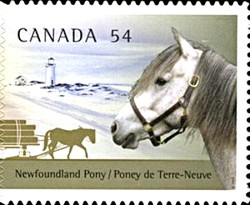