Closely based on a true story, a young family are holidaying in Thailand during the tsunami disaster of 2004. Separated, the survivors hunt for their loved ones.

I watched 'The Impossible' because two people independently recommended it to me. They each spoke in such gushing, shocked tones, that I hunted it down immediately.

Now my voice is added to their passionate referrals.

I spent every second of this movie wide-eyed and utterly captured by the story on the screen. Knowing it was a true story too, my heart was truly in my mouth. The tsunami ravaged that landscape, and it didn't discern between age, gender, color or creed over whom it endangered.

Watch 'The Impossible', that's all I say.

'The Impossible' is about the 2004 Indian Ocean tsunami, but it's also about humanity from the perspective of one family caught up in the tragedy. 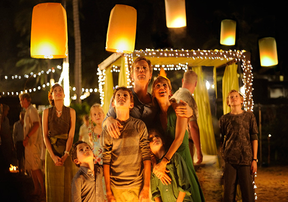 English physician Maria and her Scottish husband Henry had taken their three young sons on a Christmas holiday to Thailand, when the tsunami hit.

One moment, Maria was relaxing beside the pool with a good book, while Henry and the boys played ball in the pool.  The next, the whole scene was destroyed.

There was no visible pool. There was barely a hotel standing. Destruction stretched for as far as the eye could see. Bodies and deadly debris floated in the water. This was not a case of brace yourself and survive it. People were swept miles away on a raging current. Hundreds of thousands more lost their lives.

It all happened so fast. An instant of rumbling, then all of reality turned on its head. For those not killed immediately, the aftermath was a desperate fight for survival. The hours, days, weeks and months which followed constituted a confusion of reaching medical assistance, finding your loved ones (or identifying their remains, or never knowing what happened to them), counting the cost and putting your lives together again.

So what if you had a lost five year old in all of that?  Or a seven and half year old?  A thirteen year old?  Your husband or wife?

That's precisely what happened to the Belon family, and The Impossible recreates their story blow by blow.

What Would You Have Done?

The first person to recommend this movie to me was a father with three children of his own. He watched The Impossible with his family all in the same room.

"All I kept thinking was 'what would I have done?'" He told me. "You can't help putting yourself in that situation and trying to work it out."

After watching it myself, I knew what he meant. I too found myself silently attempting to advise the people on the screen.

"I couldn't stop crying!" The second person told me. "I kept thinking of those kids and I wanted to jump into the film and sit with them!"

I understood what she meant. I only cried once during the movie, but that was when a seven year old was being so brave and grown up looking after his little brother.

The Impossible on Amazon Instant Video

The Impossible Realistically Depicts the 2004 Tsunami

The movie was released just eight years after the real disaster. There are plenty of survivors who have attested to the movie's unrelenting realism. 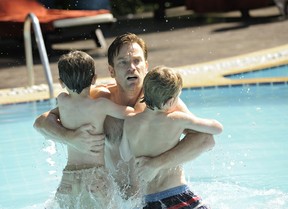 Director Juan Antonio Bayona and writer Sergio G. Sánchez were well aware that they were recreating a very recent disaster.

They were determined from the outset to make this as faithful as possible to real life events, out of respect for those who lived through it and those who were lost.

Initial filming took place in Spain, but then the entire cast and crew relocated to Thailand for several months. They were in the exact place where the Belon family stayed during the Indian Ocean tsunami disaster.

Everyone around them had survived it. Most of the extras in The Impossible had experienced the reality. They each had their own stories of homes in rubble - or washed away entirely - family and friends killed, and their struggle to make it through the disaster itself. They relived those moments in miniature in the background shots.

The Belon family came to Thailand for filming too.  Tom Holland - an unbelievably talented thirteen year old actor - has talked about how the real life Lucas went through the script with him, and told him all those private things that only Lucas could have known. While Tom portrayed him before the camera, Lucas was watching behind it.

Actress Naomi Watts has equally related how some scenes so overwhelmed her, that she reached out for the real Maria Belon for comfort and connection!

Interview with Maria Belon and Naomi Watts about The Impossible

Maria lived this for real. Naomi played her in the screen version. The two ladies discuss their experiences of making the movie.

Where practicable, Juan Antonio Bayona disdained computer graphics for working with real water. For the tsunami scenes, the actors involved spent up to eight weeks being tossed around in raging currents.

The result is a terrible realism, wherein the unpredictability of the torrent was laid bare. Tom Holland (Lucas) said that he wasn't always acting, when he looked so scared. He really was exhausted and gasping for breath!

There is stunning cinematography in The Impossible. Viewers are left in no doubt of the sheer scale of this disaster, even as they focus upon the human story at its center.

The Impossible on DVD

The Impossible DOES Pass the Bechdel Test... or Does It?

There's only one central female character, but there's a hospital full of female doctors, nurses and patients. 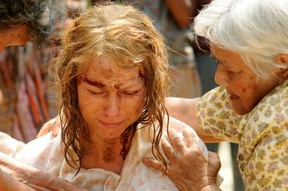 The Bechdel Test asks that there be at least two named female characters in a movie. They must converse with each other. The subject of that conversation cannot be a male character.

I thought that The Impossible passed with flying colors.  Maria is the only main female role, but her desperate journey brought her into contact with many more of her gender.

There were the Thai ladies in a ruined village, who provided First Aid and saw her safely to a hospital. Once there, Maria was surrounded by women. She has a very poignant interaction with a fellow patient, which doesn't once mention their men. She discussed her injuries with a female doctor. She was tended by a female nurse.

But none of them were named. It's hardly noticeable in the movie itself. It's only as I came to add their names here that I realized the cast list is full of such designations as 'red-headed woman', 'operating nurse' and 'patient in Takua Pa Hospital'.

The Bechdel Test demands NAMED characters, therefore none of those conversations count in the end. It's a crying shame, because it really should have passed.

More on The Impossible and the 2004 Indian Ocean Tsunami

The library system has this film so I'll be seeing it again. It's interesting about the Bechdel Test apparently being more than met with the numbers of female roles, but not really, since only one gets a name.

Would a sequel be interesting in terms of the hotel and the survivors?

It was truly an amazing film, and the lead actors were wonderful. Wait until you see Tom Holland too. He was only 13 when he filmed this as well!

Naomi Watts and Ewan McGregor? It would be hard for this movie to be a flop! These two are high caliber actors. They are actors. Not movie stars! :) (Borrowed that distinction from a funny line I heard the late Peter O'Toole say.)

I know the part that you mean, and yes, I was willing her along all the way. :)

I saw it at the cinema when it came out. It was very powerful on the big screen. I remember the story, that she fights to do something from one point on (I don't want to give any spoilers), but I don't remember exactly what her project was about. That's what happens when you watch a lot of movies :)

It would be spoilers to tell you too much, but I think you'd be fine watching it. <3

I don't think I can bear to watch it, but it does sound really good (Since we had the small one I find it hard to watch anything kids get hurt in!).

I'm really pleased that people are creating art around these huge events, and listening to survivors rather than just guessing. It is important to talk about things like this.

I would definitely recommend it. It's not at all boring.

I never actually saw this movie. I had heard it was good, but I was afraid I would be bored. Maybe I should suggest watching this on netflix at my parents' house sometime.

Robert Redford stars as an older man alone, on his failing boat, in the middl... 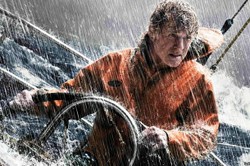 Robert Redford stars as an older man alone, on his failing boat, in the middle of an ocean. Survival would take a lot in ingenuity and hope.
100%  26   13 JoHarrington
Action and Adventure Movies