My mother and I used to like nothing more than an afternoon out at the races, so I thought I'd look at the origins of horse racing.

With the UK horse racing industry generating at least £325m in taxation revenue annually, employing over 20,000 people full-time and over 70,000 people indirectly, it’s an important business. In addition to this, over 180 charity race days are held every year. There is something about watching those beautiful animals walking around the paddock before the race that makes the hairs on the back of my neck stand on end; it’s something I never tire of watching. Of course, the other side of the sport is the gambling, but I’ve chosen not to focus on that.

When I was younger, my mum and I often used to go to the races, not because we were gamblers, but because we both liked to look at the horses, watch the racing and see whether we could pick out the winners, just for fun.  For us, the fun was in the actual event.

Horse racing is one of the oldest sports there is, existing in some form as far back as 700 BC, when it was one of the Olympic Sports.  When Richard the Lionheart was king, in the twelfth century, the first known prize of £40 (truly a King’s Ransom in those days!) was offered to the winner of a race.

It is believed that the name “The Sport of Kings” relates back to the days of King James I.  James had a palace built near the village of Newmarket in Suffolk and the rest, as they say, is history.  Horse racing continued to grow in popularity during the reigns of both Charles I and Charles II, although in those days, most of the races were just between two horses.

Charles II became known as “the father of the English turf.”  It was he who firmly established Newmarket as the home of racing.  He first established the King’s Plates Races, races for which prizes were awarded to the winners.  He also established a set of rules for these races: the horses had to be six years old and be able to carry 168 lbs.  The winner was the one to win two four mile heats.

Under the reign of Queen Anne, the races started to involve several horses racing against each other, and it was during this time that proper public racecourses were actually founded.   Anne herself founded Ascot (Royal Ascot) in 1711. 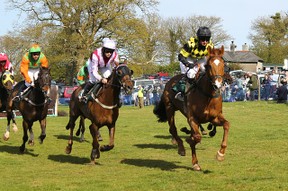 In 1740 parliament passed a law to ensure that the horses entered for the races were actually the property of the owners - it seemed some underhanded dealings may have been going on and “ringers” (horses better than the actual ones) had fraudulently entered in some cases.

The Jockey Club of Britain was founded in 1750 when a group of gentlemen got together and wrote their own set of rules about racing.   They changed the rules that King Charles had written, and wrote new, more detailed rules.  Initially, they just applied to Newmarket, but they were subsequently printed in the Racing Calendar and became nationwide rules.  The Jockey Club took over as the regulatory body for English racing and remained so right up until 2006 when the Horseracing Regulatory Authority took over.

In the UK, there are two main types of horse racing, flat racing and Steeple chasing or National Hunt racing (racing over jumps).

Flat racing is the most common type of racing worldwide.  In most parts of the world, the tracks are generally oval in shape and on a level, but this is not always the case in Britain and Ireland.  Epsom racecourse, for example, is set on a hill.

Jump races are those that involve horses jumping over obstacles as they race around the track.  Perhaps the most famous in the UK is the Grand National, first run in 1839.  It is held annually at Aintree, Liverpool.  It is just over four miles long with 33 fences.  Actually, to call them fences and leave it at that is slightly misleading.  The jumps in the National are bigger than in other races, many wi 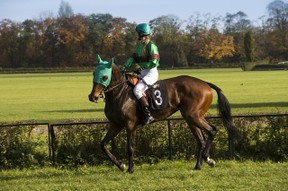 th ditches or brooks one side or the

There are 60 race courses in the UK at present, two in Wales, five in Scotland, and the rest in England.  Some, like Ayr, Chepstow and Lingfield Park, have both jumps courses and flat racing courses.  Others are only one or the other.  Lingfield Park is one of five, at the time of writing, which has an all weather course, although as these are very popular, no doubt others will follow. 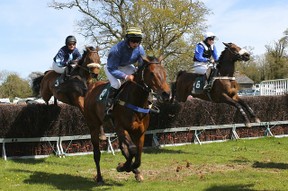 No account of UK horse racing would be complete without mention of my personal favourite, the Epsom Derby. It is often referred to as the Blue Riband of the Turf.  It originated in 1779 when it was decided that a race should be named after the host of the post race party, 12th Earl of Derby.  The race is run over a distance of just over a mile. 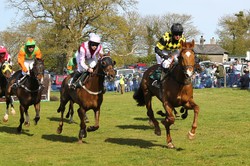