Critics constantly vote The Third Man. the film directed by Carol Reed from a Graham Green script, to be the best film ever. To see why, visit the Museum devoted to it in Vienna.

Routinely listed as the best film ever made, The Third Man is a brilliant, evocative portrayal of Vienna in the immediate aftermath of the Second World War when the burnt-out city was divided into four zones among the victorious allies, Britain, France, Russia and the USA, a division which created a world of criminals and black marketeers and encouraged the world of spying. The Third Man film, stars Joseph Cotton, Orson Welles, Alida Valli and Trevor Howard, but the real star is post-war Vienna itself, a Vienna most people have forgotten about as the Cold War disappears from memory.

If ever a city was defined by a movie, that city is Vienna.

Like many other visitors to that hub of culture and history, I arrived there with notions of mornings tucked away in the Hotel Sachertorte enjoying high-calorie kaffee und kuchen, and nights at the world-famous opera.  And I did all that.

But I found another side of Vienna in a little museum hidden down a residential side-street in the Margareten neighbourhood - The Third Man Museum.  The sole focus of this private exhibition which exists without sponsors and without subsidies is The Third Man, Carol Reed’s 1949 film noir classic with screenplay by Graham Greene and a cast that includes Orson Welles, Joseph Cotton, Alida Valli and Trevor Howard.  With its haunting theme tune played on the zither by Anton Karas, its atmospheric photography and gritty screenplay, it is the perfect antidote to too many palaces and pastries.

The Film of The Third Man

Kim Philby, one of the UKs most famous espionage agents who worked for the Russians along with GuyBurgess and Donald MacClean, had been resident in Vienna in the early thirties and it is said that it was this fact that gave Graham Greene the idea for the screenplay, although it is no less a fact that spying seemed to come naturally to Vienna.

Briefly, the story of the film is about a writer of Westerns, Holly Martins played by Joseph Cotton, who arrives in Allied-occupied Vienna looking for his friend Harry Lime (Orson Welles) only to be told that Lime has been killed in a car accident.  He subsequently attends his funeral where Major Calloway (Trevor Howard) is quick to tell him that Lime was a criminal and that he is wanted by the occupying army and the police.  He doesn't believe Calloway, of course, and things convince him that Lime was murdered.  He gets to know Harry's girlfriend (Alida Valli) whose is a refugee from the Russian sector and is fearful of being returned there.

In the most iconic shot of the film, and the one we are all familiar with, he sees Lime's face illuminated in a car's headlights.  There follows a cat and mouse game played out in the sewers of Vienna when the smuggler, Harry Lime, is hunted down by the army and his one-time friend, Holly Martins.

If a city can be said to be an actor - Vienna is that city in The Third Man.

Contents of Museum of the Third Man film

A treasure trove of over 2,000 original film posters, costumes, sheet music, sound and film recordings, autographed photos, zithers, CDs, books, and recordings of the theme tune played by Anton Karas in the film,  the Museum is a movie buff’s heaven (even Little Hansel’s cap is here).  One of the highlights is a still functioning 1936 Ernemann 7b projector which was used when the film was first shown in Vienna, and which is now used to play back a short film sequence.

The entrance to the museum is at street level and is devoted to the film, and after you’ve spent time there, you are escorted outside and down the street to another building which houses, among other things, Trevor Howard’s original script and the actual zither on which the theme tune was written and recorded.

Without Anton Karas’s zither music the film is inconceivable and his zither is prominently displayed along with an early score.  There are also numerous cover versions of the music, including one from The Beatles!

Fascinating though the exhibits are, the rooms in the basement housing post-war artefacts which are less about the film and more about the period in which it is set, are just as interesting if not more so.  The murky world of post-war Vienna, its citizens fearful of the future, its demarkation lines a barrier to free speech and thought, are brought to life in these rooms and augments the information in the film.  It is, after all, the setting for the film.

This part of the museum tells the story of Vienna in the days before, during, and after the war, the dark days that are seldom spoken of in today’s Vienna.  There are sections covering the early 30’s when Austria was ripe for a takeover by Hitler, the days of the 1938 Anchluss and the Nazi annexation of Austria, and the reality of 1.7 million displaced persons in post-war Austria.  Little time is spent on the actual war but the post-war is covered extensively with displays marking the occupation by American, British, Russian and French forces.  Ration books, newspaper cuttings, photographs, and video recordings of survivors, bring this harsh period to life and as background to The Third Man it is an invaluable historical source.

The Third Man Museum, run by enthusiasts, one of the best in Vienna.

The Museum is the life work and consuming passion of its owners, collector and historian Gerhard Strassgschwandtner and his wife Karin Hoefler who has designed the displays over thirteen rooms.  Being unsubsidised they have to work to support their passion (they reckon all their money is spent on the Museum) so it is only open on Saturdays.

Not many locals visit this museum, not many taxi drivers know where it is (I had to try three before I found a Portuguese cabbie who knew where it was).  The portrayal of the city in ruins after the war with a population mostly involved in smuggling, black marketeering, or just looking the other way, is not one that the Viennese wish to remember.

Although it is one of the greatest films of all times, it has never been popular in Vienna.  Gerhard and Karin are working to change attitudes.You may not see the Museum listed in local guides but please don’t think this is because it is not worth it.  It is very much worth a good part of a Saturday spent in Vienna.

Wow! If that comment comes from the Duncan Smith who wrote Only in Vienna I'm indeed honoured. Only in Vienna was my guide to Vienna when I was there and I found it invaluable.

An excellent article that brings Vienna's best small museum out of the shadows. 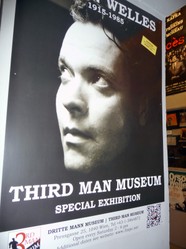