Well, folks, a migraine on my usual day of publication, Wednesday, really forced back my writing schedule. Never fear! Just in time for you to get in one last re-watch before the fourth episode of this season debuts, tonight; allow The Venture Revue to explore what exactly happened in S5E3, "SPHINX Rising," and why this episode was not just great, but was perhaps one of the best episodes of "The Venture Brothers" yet released! On that note, hey! I'm Jesse Pohlman, and this is The Venture Revue!

Begin With The Boss - Gary, AKA Henchman 21!

"SPHINX Rising" revolves, unsurprisingly, about the fate of the super-hero "organization," SPHINX.  As we saw in Episode One of Season Five, Brock and Shore Leave left our best buddy Gary in charge, after the OSI re-grouped and re-claimed it's old members.  Why they didn't take Gary along with them is sort of beyond me, but maybe it's because he was never in the OSI in the first place? 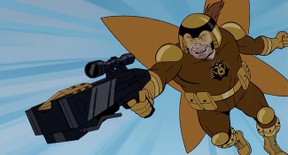 The episode opens with Gary doing what he does best:  Targeting evildoers and punishing them!  I know this is new, considering he was a top henchman for The Monarch, but here's the thing:  Gary's awesome.  Granted, in keeping with the well-established motif of "failure" that The Venture Brothers is written around, he's not universally awesome.  For example, he busts up a super-villain shipment led by Long Division, and even kills a bad guy by the name of Short Division.  Of course, Short Division is later described as "an eight-year old boy" and "a dick."  He also screws up Brock and Shore Leave's undercover work against them.

But here's the thing:  Even Brock admits that Gary is actually good at what he's doing.  Not good enough to avoid an obvious trap later in the episode, one which leads to his imprisonment during a coup, the return of SPHINX to the forces of evil, and the ultimate demise of his anti-crime enterprise, but he certainly beats the piss out of the Monarch without even trying.  In the end, Gary grows mainly because he is forced into the realization that SPHINX was never meant to be his.  Sure, he may have a role in the future OSI (the episode ends with him standing next to Hunter and other agents), or he may return to villainy, but SPHINX served a very specific function and, with the OSI firmly under Hunter's control, that function wasn't needed.

I think it's already evident, by the way, that this episode's writing absolutely destroys last episode's.  Sure, Hank developed in a similar manner as to Gary's development; but, while this episode was funny and poignant and had a lot to do with a lot of old story-lines, Episode 2 of this season really didn't draw on anything deeply tied to The Venture Brothers' character arcs.

Oh, and speaking of The Monarch...!

The Monarch And Rusty Venture

See, one of the things I praised about S5E2 was that it at least tried to go back to a previous story line.  Sure, it failed miserably at this attempt, but this episode nailed it.  How well did it nail it?  Well, for four seasons we have heard all about The Monarch's hatred for Doctor Venture.  Well, almost all about it.  We just don't know why.  We get that Rusty is a dick, and The Monarch hates his personality.  They grate.  We know The Monarch has been actively trying to murder Rusty since college!  Yet every attempt to get at the actual background of this rivalry has failed. 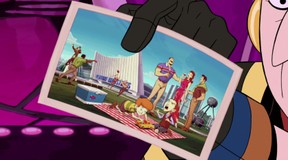 As you can no doubt see, the Monarch, after going under cover with Dr.  Mrs.  The Monarch, manages to infiltrate the Venture Compound.  They plant some explosives (this plan fails), but Doc shows them his old scrap-book.  Naturally, Rusty gets distracted by Hatred's discovery of The Monarch's bombs, but this allows our favorite insect-themed villain to have some alone-time with Rusty's book.  As we see later, The Monarch is plainly "playing" with Rusty; Rusty's dad, along with The Monarch's parents are in the background along with other figures who are harder to make out.  Now, remember; in Season One, in the very first episode of the series in fact, we learn that The Monarch's parents died in a plane crash when he was very young.  They were wealthy enough to leave him a trust fund that eventually financed his entire criminal empire!  But now we learn that they were friends with Jonas Venture Senior?  And, more importantly, we've learned that The Monarch has absolutely no recollection of ever having "played" with Rusty.

We still don't know exactly why The Monarch hates Rusty Venture, but now we know that they have some sort of history together that even he doesn't remember!  Will we find out what it is?  Chances are, no; with the word on the street being that Doc Hammer and Jackson Publick are slated to do a sixth season and are already writing it, well, this season just doesn't seem like it's going to yield too many more clues.  Still, for such a major revelation to come this early in the season, instead of - say - as a cliffhanger between five and six?  That indicates that maybe we can hope for at least one more little nugget of awesome knowledge.

Yep, that's the bottom line, here.  I almost feel like Episode 2 was a poor, poor attempt to do what Episode 3 did.  And, it did it well.  Two fan-favorites get a lot of love (Gary and the mystery behind the arch-rivalry), the fate of an entire syndicate is decided (SPHINX), some classic parodies are put into play (spoofing G. I. Joe), and best of all?  It was funny.  The episode flowed together.  If it had a weak point, it was Gary seeming a little too pitiful when given a side-by-side comparison to Hunter.

Then again, Hunter is one of those character's whose flaws are not at all in his level of capability, but in his general weirdness.  Gary?  Gary reminded me of one of those really light-hearted college professors you see, or at least the stereotype thereof.  He had virtually no spine, showed almost no capacity for leadership, and, well, if anything reinforced that he's a great solo operator or soldier in the field, but not ready to lead.  No matter how much his "Jet Boy and Jet Girl" days might have put the idea of running his own show in his head.