Any television show's season - or, really, any work of art! - will have high points and low ones, but a well designed series always strives to make even the lows relevant to the plot. "Venture Libre," the second episode released of Season Five, well...It's high point was the post-episode teaser for the third episode, "SPHINX Rising." There's just no way I can compare my excitement for what's coming with my overall meh-ness of the previous episode, possibly because the show's triumphant, hour-long return set such a high bar that a successful follow-up was unlikely. Was it flat-out bad? No, but let's examine it in detail.

In an unusual twist for any review I do, I'm actually going to start with the negatives of "Venture Libre."  Usually, I dig the positives and turn it around from there, but here's the real kicker - the episode just felt lost.  No, not "Lost," because that would be awesome; and, not because they were in a jungle for most of the episode, either.  I felt as if the plot meandered along, its relevance to other episodes was tangential but not significantly stunning, it didn't build off of the season debut, and, overall, I was just hoping for a deeper Venture experience.

The Plot, The Pain

Since I'm not really spoiling anything, the plot is as follows:  General Manhowers (always a clever name) demands that Doc help him fix a secret weapon that broke while under warranty.  There's very little build-up, it seemed, to the fact that we're talking about Venturestein.  Now, Venturestien was introduced in "Viva Los Muertos," so, points for referring back to an established episode!  What's more, they refer to the knock-off Scooby Doo characters from "Viva," as well as former Team Venture member Hector.  There was clear potential for both comedy and plot development.  And, given that we're talking about zombie-esque monsters with some degree of self-determination, it makes sense that there'd be some kind of colony involved.  Hell, they even make mention of Venturestein's initial training to be a shoe-sweatshop worker!  So how did it go so wrong?

It just felt inconsistent and forced.  See, Venturestein starts rallying other super-science "abominations" to his cause, which itself isn't terrible.  But - and this is key - Venturestein's favorite person in the world is also the one who killed him, Brock Sampson.  True, there's always going to be the "father-son" dynamic of Venture-and-Venturestein, but Brock eventually bonded with the monster by hiring him a prostitute (of course), providing a nice, if abrupt wrap to the episode and Venturestein's arc.  So, how does Brock handle seeing the shoe-obsessed creature he killed, only to befriend after Doc brought him back?

He doesn't - he's not there.  Instead, we get Sargent Hatred dicking around, losing to a "cheetah man," which could have been a priceless reference that never got made. 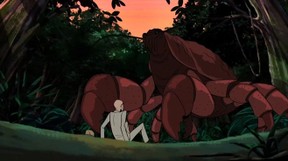 Moreover, it's not just Doc's clone-zombie-army that are involved, but a bunch of generic and random animal/human hybrids, super-sized land-lobsters, and whatever else you can think of.  And, naturally, there's discord because their boss and "liberator" suddenly wants to spare his creator's life, after killing the "parents" of other abominations.  Oh, and in the ultimate abortion of a plot arc, a congresswoman stops by the Compound, gets turned away by Dean, determines that Doc has been captured in the Jungle, then promptly...Dies?  Okay, so she becomes an abomination as well (Rusty did what he does best!), but...?  Really?  The writers could have introduced a great new antagonist or stumbling block, and what we got was a self-contained episode that felt insignificant.

On To The Good! 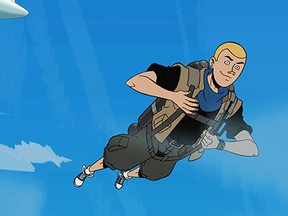 Admittedly, I'm a little tired of the Batman-Worship that the writers display.  In particular, I'm tired of Hank trying to be Batman, running around in a "Bamf! Pow!"-era getup, and generally being a moron.  So when Hank starts Batmanning around, lost in the jungle and eating a metric fuck-ton of coffee (established abruptly in this episode as a serious no-no for him?  Erm, spontaneous?  Like calling Marty McFly a chicken?) beans, well, Hank actually does something amazing:  He becomes inspired to actually go guerrilla on some...Gorilla-men...

Okay, bad puns aside, he becomes an Aztec-style Bat-man and actually, seriously, seriously wrecks faces.  He actually (and with something resembling a competent plan!) saves Doc and Hatred.  Sure, there's a mistake or two, but it actually establishes Hank as a fully competent character.

Dean continues his emo-kid phase, but he makes the decision try and return Helper to his original, non-walking-eye form.  He muses that both of them have been forced into a life they don't like, and I found that incredibly awesome.  Was he successful?  Not exactly; instead, he provided for the deus-ex-machina that saved Rusty, Hatred, and Hank.  But, it was a nice step forward in the redemption of Dean, who - I've mentioned - I can't really stand.  It's almost as if he's becoming a "straight man," or a character that is presented as a seriously-minded victim of the cartoonish world around him.  Previously, Brock fit a large chunk of that role, but he's gone.

Basically put, this episode wasn't bad - but it wasn't great.  It wasn't what the first episode of the season set us up for, and when we're teased with learning more about SPHINX's fate in Twenty One's hands?  It simply feels as if we've been left with a stand-alone adventure of Team Venture's.  That's never a bad thing!  "Twenty Years To Midnight" was an amazing episode that felt like it could stand alone while suggesting, subtly, future plot lines!

But "Venture Libre" just didn't do it for me.  Maybe it will for you; maybe it did!  But as for me?  I'm looking forward to next week. 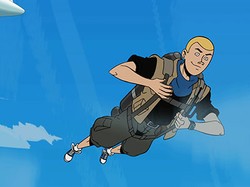