With Season 5 of The Venture Brothers now upon us on Adult Swim, I've decided to cast my thoughts on each episode!

The Venture Brothers is a show with quite a history; it debuted as little more than a comedic take of the old Johnny Quest cartoon, but quickly evolved a narrative of its own. Today, such concepts as "costumed aggression" have their own sub laws within this intricately written universe, and as Season Five of the series kicks into high gear, this is sort of an homage to Doc Hammer and Jackson Publick's creation! Today we cover Season Five, Episode One, which aired on Adult Swim on the 2nd.

One thing I don't intend to do with The Venture Revue is a plot summary.  You guys have seen it.  In this case, you already know that The Monarch spends most of the episode lamenting 21's departure; that 21 laments SPHINX's disbanding; that Sergeant Hatred is a terribly odd human being, and that Rusty remains something of a sociopathic super-scientist!

You also are undoubtedly aware that Dean is breaking away from his father's control, that Hank is a putz, that Jonas Venture Junior is infinitely more successful than his brother even when his brother succeds, and that the biggest news of the episode is probably that Master Billy Quizboy has himself an Arch-Enemy!

Yep!  Billy!  Not Conjectural Technologies, but Billy himself!  And, to make matters worse, his enemy has chosen to have an albino side-kick, cementing Pete White's status as a B-Teamer.  I've always found Billy to be one of my favorite characters:  He's easily the most capable of Rusty's crew, and his greatest weaknesses seem to come from simply not being socially versatile.  Doc Venture knows how to put a gloss on things, and Pete White is great at playing video games, but Billy?  He has it on lock-down.  And in a move clear to make everyone despise the jerk, his Arch is clearly a wealth-wasting basement-dweller, something that'll grate on just about everyone's nerves, which to be fair is probably the target audience of this show.  (I happen to live above the garage, thank you very much!)

But St.  Cloud isn't the only Arch-Enemy we're keeping an eye on.  The Monarch swings into action in his typical manner:  He assumes 21 is on his side (wrong), he tries to sabotage Venture (and consequently saves him), and is ultimately a hilarious addition to the show.  His character might be a bit more predictable, these days, but that doesn't make it any less sad to see him dwell in denial over his friend's betrayal. 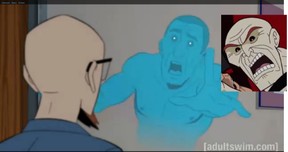 Yet there are other Arches out there making guest appearances- or, at least, what might be guest appearances!  During a scene where Hatred confronts a 'ghost of his past,' Venture identifies the blue man (a Dr.  Manhattan lookalike, to be sure!) as one of the interns who happened to get "out of phase."  I couldn't help but notice that his eyes and facial features bore an eerie similarity to those of Torrid, the Arch-Enemy of The Order of the Triad (who are pretty much absent, this episode, sadly).  Is Torrid some kind of time-displaced entity rescued from his plight by magical demons?  Have I just been watching too much Lost?  Or is this just a case of similar art styles leading to potentially awesome fan-fiction?  Who can be sure!?

And, of course, Brock remains on the hunt for his dearly beloved, Molotov Cocktease, who apparently did not die with what was clearly not the real Monstroso.

I make little secret of the fact that, for four seasons, I have despised Dean.  There have been, like, two episodes where I've appreciated him - and one of them involved a musical, so you know how that must have went!  Maybe it's my emo roots, but Dean actually seemed to be pretty likable in the first half of this episode.  He loses his little bit of brains over some girl, but he at least got a half an episode of likability in!  Then he became a moron, again.

Hank, oddly, didn't seem to make much of an impact.  He's clearly still harping about HankCo, and he's also got Nikki watching him sleep, but other than that?  Well, he got his own bedroom?  I don't know, I don't feel like Hank needed to be in this episode anyway.

All in all, for an hour-long return to a show that has been off the air, with the exception of brief "specials," it was a decent episode!  So much was left in the air at the end of Season Four that most of it had to be hand-waved away.  Oh well!  Season Five will probably be the most in-depth yet, and some things - like Rusty's beard - will never change!

Well, I'm a big fan, and Hammer/Publick rarely disappoint. Chances are, I'm gonna be less "honest reviewer" and more "gushing over how awesome it is!" But if things somehow go south, or if I don't like something, then I'll take it up as it comes along.

I take it your a Venture Brothers fan, as well?

Always good to have a good honest third party revue.