The Walking Dead Board Game

Ready to play a zombie card game? Good. Because Cryptozoic has released The Walking Dead board game based on the popular AMC's TV show.

Are you a fan of The Walking Dead? Do you like playing card games with your friends? Then you may want to take a look at The Walking Dead board game released a few months ago by Cryptozoic. Become Rick, Shane, Glenn or some other famous character from the TV show and see what it is like to live in a world without any rules.

How long do you think you would survive in a land full of zombies? A year? A month? A day? How about you try first for an hour by playing The Walking Dead board game. Pick your favorite character from the popular TV show and go around Atlanta, collecting supplies from parking lots and abandoned supermarkets. But be careful. Zombies lurk everywhere and weapon supplies are limited. Not to mention that your best friend might turn into your worst enemy. If you were looking for an awesome zombie card game, you might have just found it.

What is The Walking Dead?

For very few of those who still don't know, The Walking Dead is a world popular TV show/comic book series about a group of survivors who try to stay alive in a world infected by a zombie virus. Led by an ex-police officer Rick Grimes, these courageous people dream about living a normal life, while around them the most horrendous things are happening.

The Walking Dead was first released as a comic book series written by Robert Kirkman. Nearly ten years after the release of the first issue, The Walking Dead TV show premiered on AMC and has been one of the most popular TV shows ever since.

Buy The Walking Dead board game on eBay

Watch The Walking Dead on Blu Ray and DVD

The Walking Dead board game was based on Season 1 of the TV show. The survivors are still in a camp just outside of abandoned Atlanta city and their supplies are very very low. Your role is to help them collect the supplies and kill every zombie that comes along your way. This is not as easy as it sounds - you have very limited weapons and once you use them all, you are pretty much left on your own.

Buy The Walking Dead Board Game on Amazon

The Walking Dead Board Game Rules

How to play - Summary

There are six characters that you can choose from. Each one of them has some special ability. At the beginning, every player gets a certain number of weapon cards and allies (which a player loses whenever a zombie bites him).

You have to go around the game board, stop at four different corners, and collect the supplies stored in those corners. Wherever you stop, you have to pull out a challenge card, which most of the time is a zombie encounter.

If you have experience playing card games, then you can probably guess how to fight a zombie. Each zombie has a specific strength, determined through a number. The player has to roll the same or higher number to defeat the zombie. If you feel that the zombie is too strong, you can use  your weapon cards, which will add some numbers to your roll.

But that's not all. Although at first there are no teams, they are formed later on. When you start a game, you are all survivors. However, when two players "die," they turn into zombies and from there on they work together to defeat the group of survivors.

The creators from Cryptozoic explained in detail how the game is played. Check their videos on the right side.

Do you play board games?

The Walking Dead Board Game

Buy The Walking Dead Board Game (comics) on eBay

Have you read Kirkman's The Walking Dead book?

No, no, no, not comic books - the real book, without any pictures in it. Yes, it exists and it is co-written by Robert Kirkman and Jay Bonansinga. The book's title is The Walking Dead: Rise of The Governor. As you can probably guess from the title, the story revolves around The Governor, the cruel leader of another group of survivors whom Rick and his people encounter in Season 3. If you want to know how Philip went from a loving father to a sadistic monster, read this book.

More articles on The Walking Dead

... that there is The Walking Dead video game? It is not what the fans of the show and the comic book series hoped for, but it's still better than nothing. You don't get to be any of the characters we've seen so far in the show (so, no Rick, no Daryl, Shane, Glenn, etc...). Instead, you are a convicted criminal, who, after the zombie apocalypse occurs, gets a new chance in life... Although, it's definitely not the kind of life that he dreamed about in prison.

My husband is a huge fan of this show. May get the game for him...

shared this. love the show. love board games. seems like a match.... 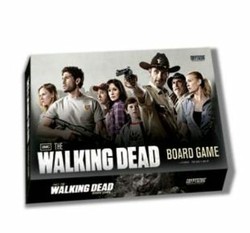