The Walking Dead Compendium book review, the original and popular comic book series that spawned a hit TV series of the same name.

The Walking Dead, created and written by Robert Kirkman critically acclaimed and apparently New York Times Best Seller. The story tells of an all too familiar Zombie Apocalypse but the study of the human characters are what's explored in great detail in this comic book series and that's the appeal of the book, real characters, real people, thrust into a nightmare world were the dead eat the living.

First of all, this book is massive standing at well over 1000 pages collecting all previous Volumes and individual comic book issues and this is the preferred and definitive version as you can if you wanted to read this all in one from beginning to end.

If you've watched the TV series first like I did and then you buy this book, you'll notice certain story plot points that are different to each other and that's what make these two separate medias really good as you can enjoy the books on a different level to the Television series. The art in this large compendium is by well known comics artist Charlie Adlard (Well now anyway!).

In fact, the art is really good, from showing Zombie horror to realistic and believable comic book characters and the many expressions. There is no color in the book, perhaps opting for a series of muted grey tones to represent the death and despair within the Zombie nightmare, although the individual comic books had color on their covers which is standard for any comic book to help sell the comics.

What's interesting with The Walking Dead is that there are slight nods and totally obvious sign posts to movies that have gone before, but it stands on it's own primarily for the simple fact that it is easy to identify with all of the characters because they are written as real people and they react like real people would if this situation was real in our world.

I gotta tell you though, don't get used to all the characters, because like a classic Zombie movie, there's bad people doing bad things because they can to other people and some people don't make it through. And the end of the Compendium shocked me as no central characters are safe and that's what makes the story very unpredictable and exciting on a realistic and human scale.

So if you haven't checked out this book already, then what are you waiting for? It's packed with great moments of horror and great characters that you can care about and ones you don't want to care about but still identify with.

Which Walking Dead Media Did You Enjoy The Best? 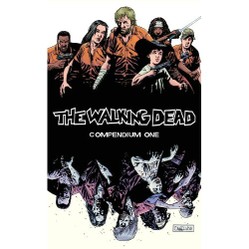