It seems like Asterix books are meant for children to read because they are comics. But the complexity of these books would be missed by most children.

The subtle references to historical happenings, parody and underlying meanings of the characters' names all require an understanding and general knowledge that's more suited to adults. This makes the Asterix books an excellent and entertaining read for adults too. 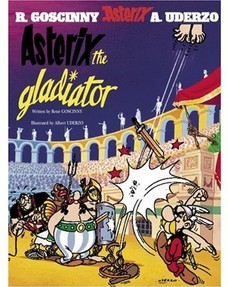 When choosing an Asterix book to read you can't go wrong with the early books from the 1960s and 70s. The quality in these early Asterix books is consistently high with the merging of the two talents of René Goscinny (writer) and Albert Uderzo (illustrator).

Although the 1961 to 1965 books, especially from the second book onwards are all excellent I would like to recommend one specific book Asterix and Cleopatra - which has been a personal favorite of mine since childhood, as well as being of interest to book reviewers.

This sixth book in the Asterix series has a historical depth with many humorous parodies of modern and ancient history. For example, the whole comic is a parody of the film Cleopatra with Elizabeth Taylor and Richard Burton (1963). We are also provided with a humorous explanation for how the Great Sphinx of Giza lost its nose. Asterix and Cleopatra is also the first time Dogmatix takes a significant role in the story - this makes the book one of the more child-friendly titles in the series.

The Translations of Asterix 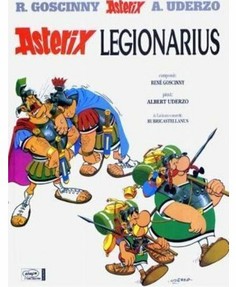 In a few countries such as France, Greece, Italy and Germany some of the books have even been  translated into regional languages (dialects), such as Corsican and Bavarian.

I'd like to recommend Asterix the Legionary. It's another personal favorite, even at 9 years old, and one that has widespread popularity with readers and reviewers.

This is the 10th book and considered the funniest book in the Asterix series. It's actually a love story (of sorts) with Obelix falling for a girl in the village. Yet in usual Asterix style it leads to a quest - this time Asterix and Obelix must join the Roman Army.

For anyone familiar with Asterix, it's easy to understand why their role as legionaries in the Roman Army produces such humor (much of this is based on stereotypes but it's all in good fun).

Meet Some of the Gauls

Much of the humor in Asterix comes from the interesting Gaulish characters who have clever underlying meanings to their names: 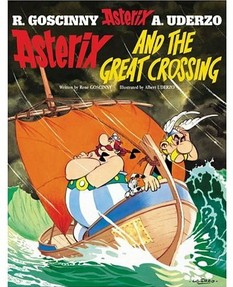 These early 1970s Asterix books were the last to be written together by Uderzo and Goscinny. As a result they are probably the last of the Asterix titles to have a consistency high standard.

The recommended book for this period Asterix and the Roman Agent. Yes it's also another favorite of mine as well as an interesting and amusing story of human behavior.

Pictured: Asterix and the Great Crossing (1975)

Asterix and the Roman Agent

An interesting Asterix book which explores a breakdown of loyalty and trust among the usually close knit villagers. it looks at the damage gossip can create. Done in full Asterix style the authors even use speech bubbles painted in an increasingly dark shade of dark green to demonstrate the worsening relations between the villagers. An excellent example of the Asterix books.

Meet Some of the Romans

The Roman Army in Asterix features a large and humorous selection of names based on medical words such as:

Names based upon personality traits are also common among the Romans like:

There are also the silly names like Odius Asparagus (which can be translated as smelly asparagus) and Raucus Hallelujachorus (translated as a disturbingly loud rendition of the Hallelujah Chorus). 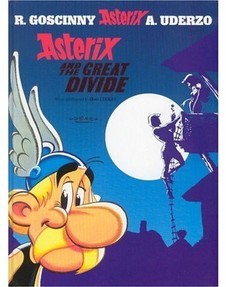 Goscinny died in 1977, the year after Obelix and Co was published. After Goscinny's death Uderzo adding writing the series (in addition to illustrating them) to his tasks to keep up the publication of new Asterix books. Between 1977 and 1979 only one Asterix book was written Asterix in Belgium (1979).

Unfortunately these 11 Asterix books written solely by Uderzo didn't receive the same acclaim as the earlier books. The story lines have enough interest but although the word play humor is still evident it does not have the wicked cleverness of Goscinny's writing.

I wouldn't recommend any specific books from this time because of this, although I encourage readers to choose the book that appeals to them the most and make up their own mind about the quality of these later Asterix books.

The Asterix books have such importance to literature they are frequently discussed in academic writings (professional journals). This includes areas such as medicine, education, literature and language.

Some of these article titles include:

When Did You Start Reading Asterix? 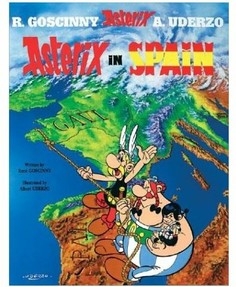 The Asterix books have a fairly advanced reading level so they are usually not suitable for children under 9 or 10 years of age, although some of the books would be fine as a read aloud story.

Asterix in Spain (1969) is probably the easiest Asterix book for children to enjoy. This is because it's the only Asterix book that Goscinny and Uderzo created that has a child as one of the main characters. Pepe - who is not always a well-behaved child will have kids giggling. Dogmatix (Obelix's dog) is also a main character in this story which will appeal to children.

Finally many of the jokes, although clever, are of a type that can be understood by children. One of the main Romans in this story, for example is named Spurius Brontosaurus - as many kids love dinosaurs they think this name is hilarious.

For those of you thay may be wondering if this was the first Asterix book I was introduced to (as a read aloud story) - yes it was.

Oh gosh what a shame about your Asterix. I had to restock my collection because when my older brother moved out he took all the Asterix with him. I did forgive him tho :) I've never read Lucky Luke. You've made me curious. I'll have to track one down to read.

Wow, amazing article! I haven't read these comics since... long long time ago... But they were my favorite. I had the whole collection published in Serbian language (I think there were 27 books). Back then (late 90s in Serbia) they cost fortune so I kept them as some kind of treasure... Unfortunately, when I grew up, my parents put all the comics in a basement where humidity ruined them... Lucky Luke was also amazing. I think it's written by the author of Asterix!

Oh boy I had forgotten about Boneywasawarriorwayayix LOL

Asterix is great. Boneywasawarriorwayayix from Asterix in Corsica was my favourite character just because of his ridiculous name.

When we went to Corsica for holidays, we actually bought Asterix on Corsica, it was great fun reading and comparing it to the Corsica we saw around as ;-)

I've come across people from so many countries who love Asterix. The series is a true classic :)

My all-time favorite comics! I devoured them as a German youngster in the 60s.
Grrrrreat articulus!

Iznogoud is the wicked Grand Vizier of Baghdad who's silly schemes, in an attempt to become Caliph, always result in catastrophe.
31%  1   4 nickupton
Comic Books 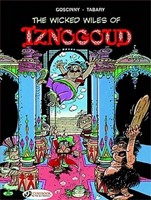 Iznogoud is the miserable Grand Vizier of Baghdad who's ridiculous schemes, whilst attempting to become Caliph, always end up in catastrophe.
Loading ...
Error!