Who is the best Marvel comic superhero character of all time?

Marvel always had the darker comics with more rounded characters than rivals DC. But from Captain America to Spiderman, from Daredevil to Howard the Duck, and from Ghost Rider to the Fantastic Four, who is the best Marvel superhero of all time. Steve Rogerson picks ten strong contenders and chooses his favourite.

Marvel Comics was often seen as the dark, grittier alternative to DC. Whereas DC had clean-cut superheroes, Marvel had flawed characters, heroes with a dark side and as such built up a loyal following of intelligent comic readers. DC responded by making its characters darker as well and so did many independent comic groups that went places even Marvel did not dare to tread.

But it was Marvel that started it and brought classic superheroes into the world, characters such as Spider-Man and the Hulk. Many have since been turned into heroes of the cinema as well keeping their world part of our world.

Below are ten of the best Marvel superheroes listed alphabetically, but feel free to add your own suggestions in the comments box at the end.

Dating back to 1941, Captain America was created by Joe Simon and Jack Kirby. When Steve Rogers is given an experimental serum to help the American war effort, his human abilities are heightened to new levels. Add to that an indestructible shield and a costume made from the Stars and Stripes flag, and the all-American hero was born. Early comics were mostly war based but later he became part of the superhero team The Avengers along with the likes of Hulk, Iron Man and Thor. The character has also appeared in numerous films.

Created by Stan Lee, Bill Everett and Jack Kirby, Daredevil first appeared in 1964. The star is Matt Murdoch, who is blinded in a radiation accident but discovers the radiation has heightened all his other senses to make him better than sighted people. He became a superhero to revenge the murderer of his father. The character appeared in the 1989 television movie The Trial of the Incredible Hulk and in 2003 there was a cinema release called Daredevil with Ben Affleck in the title role.

Mr Fantastic (Reed Richards), the Invisible Woman (Sue Storm), the Human Torch (Johnny Storm) and the Thing (Ben Grimm) make up the Fantastic Four, who first appeared in 1961 and were created by Stan Lee and Jack Kirby. They developed their super powers after being exposed to cosmic rays while in space. Mr Fantastic can stretch his body into different shapes, the Human Torch can turn into a flying ball of fire and the Thing is a super strong creature made up of what look like orange bricks. No prizes for guessing the Invisible Woman’s power. A 1994 film was made but never released, though is available under a few counters. The 2005 film was released, as was the 2007 sequel and a remake in 2015.

Stunt motorcyclist Johnny Blaze first appeared in Marvel Spotlight number five in 1972, though an earlier Western character by the name of Ghost Rider had previously appeared. The supernatural Ghost Rider, a merger of Johnny Blaze and an entity known as Zarathos, was created by Gary Friedrich. There was a movie spin-off starring Nicholas Cage in 2007.

Created by Steve Gerber, Howard the Duck first appeared in 1973 in number nineteen of Adventure into Fear. After following that up with appearances in Giant-Size Man-Thing, he got his own comic in 1976 that originally ran for thirty-one issues. The stories were mostly humorous parodies and they built up a cult following because of their surreal nature. A candidate standing under the Howard the Duck party was even elected to represent Lancaster University Students Union at the NUS annual conference in the late 1970s. A movie version was produced in 1986 and the comic was briefly revived at the same time.

The Hulk’s first appearance was in 1962 and he was created by Stan Lee and Jack Kirby. Scientist Bruce Banner was exposed to gamma radiation and transforms into the green monster known as the Hulk when emotionally stressed. A TV series ran in the late 1970s and early 1980s with the scientist’s name changed to David Banner. There was a 2003 film called Hulk and a 2008 film called The Incredible Hulk. The character has appeared in Avengers movies.

Iron Man first appeared in 1963 in Tales of Suspense number thirty-nine and was created by Stan Lee and Larry Lieber. Engineer and playboy Tony Stark has a damaged heart and builds a suit to keep him alive. The suit has various weapons built in. There was an Iron Man film starring Robert Downey Junior in 2008 and sequels in 2010 and 2013. The character has also appeared in Avengers movies.

Jointly created by Stan Lee and Steve Ditko, Spider-Man was to become the most famous of the Marvel stable of superheroes. The character’s first appearance was in 1962 in number fifteen of Amazing Fantasy and the following year The Amazing Spider-Man was launched as a comic in its own right. The story features Peter Parker, a teenager who gets bitten by a radioactive spider and develops extra abilities. Spin-offs include both animated and live action television series and numerous films.

Based on the Norse God of the same name, Thor is placed by his father Odin in the body of medical student Donald Blake. Storylines vary between him fighting baddies on Earth to adventures in Asgard. His main enemy is Loki. Thor first appeared in 1962 in number eighty-three of Journey to Mystery. He was created by Stan Lee and Larry Lieber. A film version came out in 2011 followed by a sequel in 2013 and a third film planned for 2017.

Created by Stan Lee and Jack Kirby, the X-Men first appeared in 1963 as a group of mutant superheroes being protected from a prejudiced population by Professor Xavier, who is training them to use their powers for good. Their archenemy is Magneto. Among the most famous of the team are Cyclops, Iceman, Wolverine, Colossus, Rogue and Storm. There have been numerous film versions.

Best Marvel Superhero of All Time

But what about Doctor Strange, Sub-Mariner, Blade and Silver Surfer, and all the other ones that didn’t quite make the list? And out of the list, who is the best of all time? Howard the Duck was arguably the most unique, Captain America is the oldest and the X-Men are enjoying a successful movie franchise. But the best has to be the character that in many ways symbolises Marvel and all that it stands for – there is only one Spider-Man.

SteveRogerson, Thank you for product lines, pretty pictures and practical information.
In particular, Doctor Strange, Ghost Rider and Thor interest me. I know them from the films, not from the original Marvel Comics. So I like Doctor Strange because Benedict Cumberbatch played him, Ghost Rider because that's the English translation title of a novel by Ismail Kadare and Thor because he's Thor.

Which would you prefer if given a choice, the original comic or the spinoff film?

A look at Iron Man, one of Marvel's more popular superheroes, and a founding ... 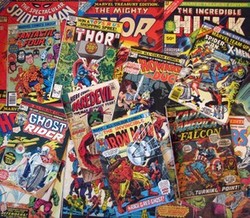 A look at Iron Man, one of Marvel's more popular superheroes, and a founding member of the Avengers.
Loading ...
Error!