Bean bag chairs fit in a variety of decors and spaces. Bean bags, with their comfortable array of fun and relaxing designs, reflect the personalities of their recliners.

An Italian company, Zanotta, is credited with the original bean bag chair, created by designers Piero Gatti, Cesare Paolini and Franco Teodoro in 1968. Zanotta was founded in 1954 by industrial designer Aurelio Zanotta in Nova Milanese, a municipality 8 miles (13 kilometers) north of Milan, northwestern Italy. The company specializes in furniture and accessories with an emphasis on Made in Italy.

Il sacco (“bag”), pear- or teardrop-shaped and filled with polystyrene pellets, was the first mass produced bean bag chair. A distinctive feature, created when the chair is occupied, is a functional headrest, formed by the congregation of displaced pellets. Still produced as a quality product by Zanotta, il sacco is available in a range of colors and fabrics, including leather.

AHH! Products is a specialty furniture company, with an exclusive focus on bean bag chairs for 15 years.

Kids tend to be fascinated with dinosaurs and pronounce with ease all those strange names! Young dinosaur enthusiasts may grow up to be dinosaurologists.

Large bean bags serve as great design accents blending with a variety of decors and spaces. Kids love their flexible shape, especially enjoyable for reading nooks or as media chairs for gaming, listening to music, or watching TV.

Personalized bean bags which reflect kids' interests and passions are high on their list for idealizing their bedrooms or favorite niches at home. Themed bean bags inspire kids as they grow into young adults, for the special patterns remind them of their enthusiasm for activities such as sports or interests such as cars, dinosaurs, horses, and nature.

Well-made bean bags follow kids through their growing years, into college, work, and even beyond. They are comfortable reminders of the dreamy excitement with which kids pursue their dreams.

A selection of seven bean bags covers a range of themes which are popular with kids and young adults --- and adults, as well!

All of the selected items feature:

Comfort, durability, and style are built into each one of these special bean bag chairs, providing all the flexibility and support necessary for dreaming, relaxing, and socializing.

Perfect for little dinosaur lovers to relax in comfortable spots in their prehistoric playroom or Jurassic bedroom!

Dinosaurs feed the imagination with their strange appearance, exotic names, and grand scale!

I remember the thrill of being regaled with dinosaur facts and stories by my brother, two years older than I, as he generously shared his precious set of dinosaur toys with me.

Happily copying my brother, I placed dinosaur-themed clothing, bedding, curtains, and rugs at the top of my birthday and holiday wish lists!

The colors --- dark brown dinosaurs against blue, lime, and tan backgrounds, outlined jaggedly in white --- of this 100 percent cotton Dinosaur bean bag are muted stylishly and blend with all decors.

Budding astronomy lovers can lose themselves in the safe, soft expanses of these star-studded skies and Saturn's rings.

Touted as the last frontier, space fascinates youthful minds, attracted to its strangeness and its vastness.

Stars captivate children with their imagined constellations, just as Saturn enchants with its unique rings. Kids enjoy space-themed decorations in their rooms.

In childhood, I was mesmerized by stars and planets, especially strange Saturn, and by the astronomy snippets shared by my brother. He also taught me how to look through his telescope. I loved listening to the mythology of space as my father read from astronomy-themed books in his library.

Little sports fans can be armchair players in their favorite All Star games: baseball, basketball, football, and soccer.

Bursting with energy, kids favor sports, which easily entertain them for the rest of their lives.

It's a family tradition in my family to love sports, especially the all-American sport of baseball, as a player and as a spectator. My father taught me to play baseball and softball, and some of the greatest summer fun was experienced in neighborhood baseball games which he orchestrated.

In childhood, my brother's limitless knowledge of sports statistics fueled endlessly fascinating conversations at gatherings of family and friends.

Cozying into an All Star Sports bean bag, perhaps with some treasured baseball cards at hand or with favorite game ball in hand, is an ideal pursuit for a sports fan.

Earth Day officially is celebrated annually on April 22nd, but every day is Earth Day for environmental enthusiasts with their own Earth Day bean bag chairs!

Kids are intrigued by the infinite variety of nature. Plant (floral) or animal (faunal) themes find a warm welcome in their hearts.

Chasing butterflies was a happy pursuit for me in childhood. I just wanted to catch up with them, not catch them! Their beautiful freedom occupied me for hours, day after day, all summer long.

Little horse lovers will enjoy vicarious rides on horseback as they relax amidst the flowing manes of herds of happy horses.

Favorite stories in childhood include such classic horse tales as Black Beauty, Misty of Chincoteague, and My Friend Flicka.

Many hours in my childhood were devoted to reading about Pegasus, the winged horse, in Greek mythology. I especially loved to settle in a corner or on a window seat while vicariously joining in Pegasus' exploits.

Horses bean bag features a pattern of horses with flowing manes. Snuggling into this bean bag, a kid has the happy feeling of riding in a herd of gloriously free horses.

Car lovers, mechanics, and racers do not need seat belts for this dream car symbolized by hot rod flames.

Cars, especially in their incarnation as hot rods, are attention-grabbers for kids and young adults. A love of cars, as with all interests, takes hold early and grows stronger with each year thereafter for automobile afficionados.

Cars have been part of my family traditions, on both maternal and paternal sides, ever since "horseless carriages" first rolled down dusty streets. My maternal uncle specialized in Oldsmobiles. Cars in all their splendor have been topics of conversation as far back as I can remember.

Hot Rod bean bag imparts warm vibes as a colorful accent piece. Wannabe drivers and passengers will have plenty of practice, enjoying the lack of seat belts while imaginatively revving engines and putting pedals to the metal.

Incipient seafarers heed the siren call of adventure on the high seas as their imaginations dive or sail near coral reefs surrounding them in Ocean Reef bean bags.

The marine environment astounds and mystifies all ages with its aqueous occupants. The colorful vista of coral reefs is enhanced by reef denizens which hover as they claim their watery environment. Kids are drawn to the wonders of the sea and especially enjoy visiting aquariums for up-close, unique views of marine creatures.

Water in all its forms captivates kids. For me, time passed by far too quickly in childhood whenever I was engaged in activities, including reading, involving water or watery environments.

Ocean Reef bean bag serves as a magic bean big transport for marine adventures. Among its colorful fish is the clown fish, beloved by kids as the lovable hero in "Finding Nemo."

"Finding Nemo": Disney-animated film found its way into the hearts of children, who are drawn to marine life.

Bodies of water, especially the vast oceans and seas, as well as the creatures living in them, cast a sweet spell on children's imaginations.

Children's minds and imaginations function as sponges, eager to scoop up whatever holds their attention.

Encouraging children in their hobbies, interests, and passions reaps lifelong rewards in terms of self-esteem and overall well-being.

Themed bean bags add the special touch of individuality to a child's room or favorite space. These bean bags generally are large enough to accommodate a growing child all the way through the teen years. Easily they create memories, and assuredly they may one day qualify as heirlooms to be passed onto to future generations.

The spaciousness of space, with all its astronomical mysteries, catapults children's imaginations and interests, daring them to expand their outlook and to explore the unknown, even if only from afar.

In contrast to this dreary chair, bean bags are considered to be among the most comfortable chairs, and they encourage dreaming.

cmoneyspinner, Giggle! It is understandable that bean bags do get hogged --- they're just so comfy cozy!

Great gift idea! Bean bag was one of my first pieces of furniture when I got married. My husband hogged it most of the time. But I loved that bean bag! :)

AbbyFitz, Oh, no, that's sad that you didn't get a bean bag. They are still fun in adult sizes. It isn't quite the same, because it's so fun as a kid to drop into a bean bag, but it's still fun.

I love bean bags. I always wanted one when I was growing up. Never got one though.

Swarovski roses are perfect gifts, not only for Valentine's Day, but also for... 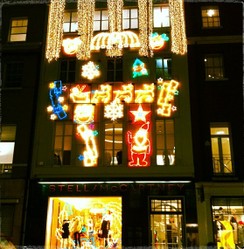 Ex-Beatle Sir Paul McCartney's daughter Stella loves her career as a fashion designer, including fashioning adorable dressy or party dresses to prettify every girl's wardrobe.
89%  6   11 DerdriuMarriner
Valentine's Gifts for Her 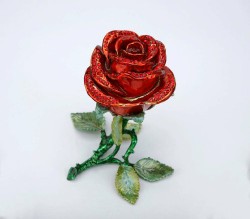 Swarovski Roses: Crystalline Beauty as Valentines and Year Round Gifts of Love

Swarovski roses are perfect gifts, not only for Valentine's Day, but also for everyday and special occasions year-round.
Loading ...
Error!