Things You Should Know Before Buying a Kegerator Beer Dispenser

As passionate beer lovers, I believe we have all at one time or another daydreamed of having our own refrigerated beer cooler. After all, who among us hasn’t envisioned pouring our own frosty mug full of our favorite ice-cold domestic, imported, or even home brew libation, in the comfort of our own home? Simply visualize for a moment, how great it would taste, a frosty mug, topped off with the perfect head, filled to the brim with the amber colored nectar of the gods, promising to sooth our parched gullet. Sound too good to be true, oh no it is unbelievably easy to satisfy these wants and desires.
Follow along, as we discuss the things you should know before buying a Kegerator beer dispenser online, and get the best deal from amazon on everything you will need to make your adult beverage dreams come true.

After thirteen years of prohibition only a few brewers’ like Anheuser Busch and Coors survived by brewing near-beer, or root beer

Here is a little important fun fact. Even a casual beer drinker should be aware of. The prohibition era in the U.S. started on January 17th, 1920 with the enactment of the 18th amendment to the U.S. constitution. This law of the land remained in effect until the feds, by way of the state ratifying convention, came to its senses and appealed the extremely unpopular act by ratifying the 21st amendment.

December 3rd, 1933 Prohibition ended thus giving the beer drinking public, large breweries that survived the 13-vear prohibition and small craft brewer’s reason to rejoice. You see my beer-drinking friend, the rules set down in the Volstead Act, were no longer the law of the land, prohibiting private citizens from owning, brewing and consuming their favorite alcoholic beverage, pilsner, lager, and craft beers.

The Edge Star Mini Kegerator is a great-refrigerated beer cooler, for those of us that enjoy the convenience of many of the beers packaged in the five-liter mini kegs. Less expensive than the Avanti, the EdgeStar works great with Heineken Draft kegs. Using one of these mini keg coolers puts an end to the hassles moving the small five-liter beer containers, in and out of an ice chest, or mini fridge, just to keep the beer cold. Using the EdgeStar mini Kegerator makes pouring a perfect pilsner glass full of our favorite imported beers, easy as pulling a tap.

The Nostalgia Electrics KRS2100 refrigerated beer cooler is the perfect kegger for folks that enjoy a cold beer in their home, poolside patio, or banquet hall. Four swivel casters make it easy to move from one area to another. The 2.5-pound CO2 bottle will make it easy to enjoy about 4-1/2 barrel or 15-gallon kegs.

With the included double meter regulator, you will find it easy to not only, keep track of the amount of CO2 left in the bottle, making precise pressure adjustments maintaining a perfect frothy head, will be much easier.

Approved for both commercial and household use with an adjustable thermostat making it easy to adjust from a frosty 30f-degrees, too a cool 40f-degrees. 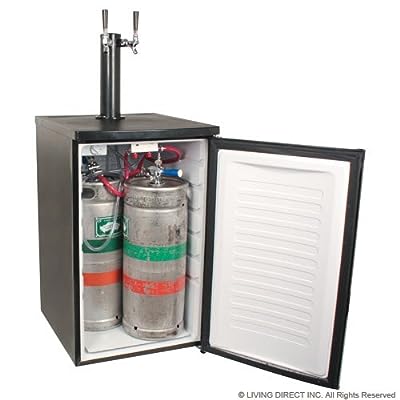 Made in the USA using a low cost imported refrigerator and American made NSF approved commercial components, the Edge Star KC2000TWIN cost less than more expensive beer fridges, while maintaining the use of the high-quality American components where it really matters.

No skimping here, high-quality American made craftsmanship sets the Edge Star dual tap tower, easy to clean faucets and beer lines all NSF approved and made in America for commercial and residential use a great choice for anyone that wants both Bud and Bud Lite or similar Sankey standard kegs on tap.

This refrigerated beer cooler has plenty of room to store either one, one half barrel keg, or two one sixth barrel kegs when you’re beer drinking, friends simply cannot agree on one brew. Home brewers will want to pick-up the additional ball lock connector required to tap the Cornelius style keg full of your favorite home brewed craft beer.

FYI, large rubberized Coors, and Miller kegs, as well as other oversized kegs. These style kegs will not work with the Edge Star KC2000TWIN Kegerator.

This unit is equipped with up-graded, five-pound aluminum CO2 cylinder, and is one of the easiest Kegerator to set-up for the homeowner, and commercial beer-serving establishment.

Get Started Kegging your own Home brew, Craft beer

No more washing and sterilizing bottles, siphoning or priming your beer

Things You Should Know Before Buying a Kegerator Beer Dispenser Chat

@ArleneVPoma If I may make a suggestion, the best choice for folks that enjoy both alcohol and non-alcoholic beverages, buy the dual tap Kegerator.
Use two of the 5-gallon Cornelius style kegs. Fill one with the last batch of homebrew, and the other with a non-alcoholic beverage such as sweet tea, lemonade, or how about your own root beer. That way everyone will enjoy the fun and convenience of a dual tap Kegerator.
Be well, happy shopping. Mike :)

Hey Katie, no man cave, patio or game room is complete without a cool beverage center and commerical popcorn machine. :)

This is so cool. Thanks for the great review on the Kegerator now I'm in the know when the men drop hints for items they want in their man caves... such as this. It's a handy little fridge.

Discover the Fun and Rewards of Homebrewing Craft Beer

How to Make Your Own Home Brew Beer

Home brewing is fun, easy and produces great quality beer at a fraction of th... 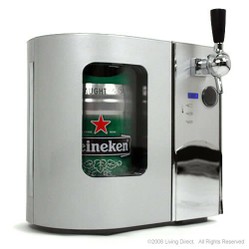 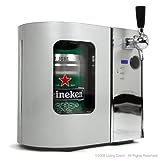 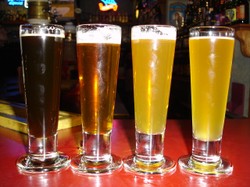 Discover the Fun and Rewards of Homebrewing Craft Beer 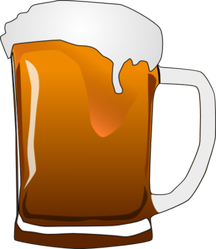 How to Make Your Own Home Brew Beer

Home brewing is fun, easy and produces great quality beer at a fraction of the price of store bought.
Loading ...
Error!