Thomas Cole painted the unique, sublime beauty of the American landscape and became a founding member of the Hudson River School.

Thomas Cole had little formal art training. His innocent eye helped him to become what the art establishment of America had been waiting for – a painter who could execute American landscape paintings without overwhelming references to the traditions of Europe.

Although his influence waned after his death, it is now recognised that by allowing his native wilderness to speak with its own voice, Thomas Cole raised the stature of American landscape painting to new heights.

Thomas Cole was born in 1801 at Bolton-Le Moors in England at the height of the Industrial Revolution. His father was a bankrupt handicraft manufacturer who emigrated to America with the family in 1818, eventually settling in Ohio. 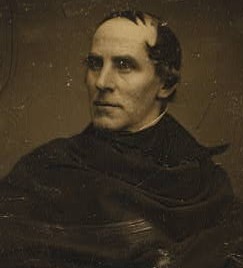 After an encounter with a peddler called Stein who painted pictures on canvas, Cole decided to become a portrait painter. He took to the road, finding little success.

His shyness meant that the close proximity of his sitters made the process an agonising experience.

After trudging over three hundred miles on foot over the mountains from Pittsburgh to the art galleries of Philadelphia, Thomas Cole  came across the landscape paintings of local American artists, Thomas Birch (1779-1851) and Thomas Doughty (1793-1856).

Their work had a profound effect on Cole - he felt that Doughty and Birch had shown a truth about nature that no European artist had achieved. He determined to build on their expertise and become a landscape artist himself.

Poster: Notch of the White Mountain by Thomas Cole

In the early nineteenth century American art was still searching for an authentic voice. With few exceptions, the strong, democratic spirit of the New World still expressed itself with reference to the Italian Renaissance.

Landscape painting was not a respected genre in the art world. The artistic elite regarded raw nature as emotionally irrational, in need of the calming influences of the humanistic tradition. The highest genre of painting was that which showed historical scenes embodying high moral concepts. Landscapes were acceptable only if created as backdrops for myths and legends, usually of Greece or Rome. Nature had to be tamed.

Since the American landscape apparently had no history it was perceived as artistically worthless. But Cole would change all that.

Painters such as Doughty and Birch reproduced the native localities that these hard-working American people were proud to inhabit – its vast mountains, clear streams and deep forests.

In 1825 Thomas Cole was living in New York working as a frame-maker. To raise money he displayed three paintings of the Hudson River in a shop window for $25 each. The ex-soldier, artist and friend of Jefferson, Colonel John Trumbull (1756-1843) noticed the works and immediately recognised, with growing excitement, the significance of the young artist’s vision.

What Trumbull saw in Cole’s work was a rawness of execution, a vigorous application of brushwork and colour that represented the unique beauty of the wilderness. Cole’s free brushstrokes seemed to express the emotional impact of the American landscape.

His work was also lacking in a traditional single viewpoint. For these reasons, he is regarded by some as a forerunner to Jackson Pollock.

Cole became the most respected landscape painter in America,  but despite such veneration, he was never totally satisfied with his work.

Books about Thomas Cole and the Hudson River School

Cole embodied the complexity and contradictions that existed at this period amongst the American artistic community.

On the one hand there was a deep desire to break from Europe and develop a democratic, American style that reflected the progress and aspirations of the common man. It was almost like wanting to break free from the restricting parental bonds.

This was juxtaposed with a fear of societal breakdown, a conservative distrust of the democratic process and a reluctance to break completely with Europe.

No wonder Thomas Cole always felt he had failed to find his true artistic voice.

In 1829, financed by a patron, Cole visited Europe. Some of his more radical acquaintances felt concerned by his foray into the 'enemy encampment'.  Yet perhaps he felt, as a self-taught artist, that he had missed out on the classical foundations that he felt drawn to.  The pull might have been overwhelming.

On his return, influenced by John Martin and Claude Lorraine, Cole began a series of monumental paintings called Course of Empire which showed the rise and fall of a great nation.

These paintings were less successful than his wilderness landscapes.

The Legacy of Thomas Cole

Thomas Cole was a religious man, basically conservative and pulled many ways by the artistic contradictions of his times. He was a fine writer of essays and often illustrated American novels such as those of James Fennimore-Cooper. He bemoaned the destruction of the environment in the name of progress, yet many of his patrons were the very exploiters of the landscape he loved.

A man of great psychological complexity, he was happiest in the Catskill Mountains area. He was a founding member of the immensely influential Hudson River school of painting.

After a long illness Thomas Cole died in 1848 at his home in his beloved Catskill, New York. He left a wife and two children.

That Wilder Image: The Painting of America's Native School from Thomas Cole to Winslow Homer by James Thomas Flexner (Dover 1970) 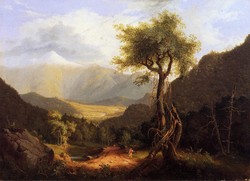 A compelling portrait of a man in women's clothing has been purchased by the National Portrait Gallery, London.
90%  2   7 KathleenDuffy
Art Galleries & Museums