The conclusion was the same in all studies – Rich tend to engage in cheating, deception, breaking the law and other unethical behavior more often than people who are not so well off.

1. Traffic signs and regulations are only for the poor

At a very busy four-way intersection with stop signs on all sides, study investigated how many and what kind of vehicles cut off other vehicles by crossing the intersection before waiting their turn in defiance of the California Vehicle Code.

Since cars are reasonable indicator of personal wealth, vehicle make, age, and appearance were used to estimate the social class of the driver.

2. Are rich blind to poor pedestrians?

In the follow-up study, vehicle make, age, and appearance were again used to estimate the social class of the driver. This time, however, researches measured the probability of cutting off pedestrians at a crosswalk.

Cutting off pedestrians also violates California Vehicle Code. Still, about 45% of upper-class drivers decided to ignore people waiting to cross the road at the marked crossing, while only about 19% of lowest two classes of vehicles showed the same behavior.

3. If you are rich, are you entitled to everything?

In the third study, participants were asked to estimate how probable it is that they would engage in some shady dealings.

Similar to previous two studies, upper class individuals proved more likely to engage in unrightfully taking something or benefiting from something they were not entitled to.

This was one interesting study. While waiting for the “test,” participants were exposed to the jar of candies that were supposedly intended for children participating in studies in a nearby laboratory. They were told that they could help themselves to some if they wanted.

It was clear that taking any candy would reduce the number of candies that children will receive. Still, participants ranked in the upper class took far more candy than those ranked in the lower class. Taking about stealing candies from the kids...

In this study, participants were given a task of interviewing job candidates. Among other things, they were informed that the specific position will be eliminated very soon, but that the candidate, who desired to maintain the job for 2 years, was not aware of this.

6. The dice was loaded from the start

Upper class participants usually ended up reporting a total higher than 12. The funny thing is that they tried to cheat knowing that the main prize was only a $50 gift certificate.

7. Is taking bribe OK if you are rich?

What’s interesting for this study is that researchers used Amazon’s MTurk to recruit participants.

In this study, participants were asked to state how likely they were to engage in some truly unethical behaviors at work like stealing cash, receiving bribes or overcharging customers.

It seems that the main indicator of possible unethical behavior is your basic attitude to greed. The fact remains that most of the rich people are greedy too.

Do you agree that the rich tend to be more unethical?

Or do you think that poor people are just as unethical?

They surely tend to be less empathic towards the poor. How they are supposed to know...?

Yes, proves what everyone knows.

“It is more difficult for a rich man to enter the kingdom of God than it is for a camel to pass through the eye of a needle.”
- The New Testament, Luke 18:25

In the end, one of the conclusions of these studies was that altruism is hard to find amongst the rich and greedy. In the words of researchers:

“We reason that increased resources and independence from others cause people to prioritize self-interest over others’ welfare and perceive greed as positive and beneficial, which in turn gives rise to increased unethical behavior.”

Google’s lost philosophy
Google started with “Don’t be evil” philosophy. Today, this stands at the sixth place of core Google principles. You can learn a lot from lessons Google forgot.

The Art of Online Money Getting – Part Two
Part two of P.T. Barnum’s rules and principles applied to making money online. See how basics of money getting do not change in the online world.

The Art of Online Money Getting
Basics of money getting do not change in the online world. This is Part one of P.T. Barnum’s golden rules applied to making money online.
Updated: 05/04/2012, DrDarko
Thank you! Would you like to post a comment now?
8

Oh my the very thought the rich behave themselves in such a manner. This made me think of the case where the rich drunk driver having just left his club plowed into a young man knocking his car off the edge of the road and embankment. The young man was alive but the rich driver left the scene claiming his cell phone did not work, like he had no car charger... went to a bar had a few more drinks, called his girl friend, who he later adopted to save his fortune, the called 911 all the while the young man was trapped alive in the vechile where he drowned due to water rising in the car. Hmmm sad to imagine money makes people unethical, greed is the root of all evil, it is when you attemp to hold on to money, becoming greedy bad behavior develops. Great article.

Really interesting. The cynic in me agrees that money has an incredible propensity to corrupt. Although, I suppose I should qualify that by stating that it is not money itself, but a love of money, which has such a corrosive effect on people’s ethics. However, the less human-loathing part of me realises that every single charitable organisation on the planet was founded by someone who had the money to do so. Money can certainly bring out all of the ugliest facets of humanity, though.

Well, according to this research, personal attitude towards greed is the main cause of unethical behavior.

Now, it would be interesting if we knew what came first, chicken or the egg...

Where does causation lie though? Rich, therefore, Unethical narcissistic behavioral as the article implies? Or is it that this behavior leads to a larger accumulation of wealth?

As if it really mattered what the truth is...

Oh yes! I recognize some people I work with too...

Interesting stuff. Explains a lot about the folks I used to work with! 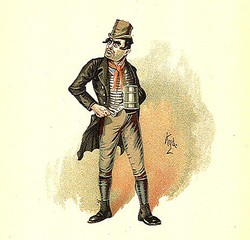 The Millionaire Next Door: The Surprising Secrets of America's...
100%  54   13 JoHarrington
Gay Rights