Pench is well known as land of the tiger made famous by Rudyard Kipling. It is India's finest reserve On a tiger safari see the indomitable Sher Khan king of the jungle.

Though well known as Kipling country is home of Mowgli the Wolf Child made famous by the author. His vivid description of jungle life in Seoni Hills and the escapades of Mowgli and wolf gang is a memorable literary feat.

Jungles of Seoni are still teaming with life and on one visit you can see many animals described in the book. On tiger safari at Pench you can see some less seen animals and wolf is one of them which has become rare now. Other animals you can see are the antelopes, crocodiles and those that hunt in the night. These are small mammals and reptiles besides some night jars that can be see under the lights in the outer ring of the park.

Sloth bear take the cake when it comes to an exciting encounter their tumbling bodies synchronize in perfection as they roll down the meadows. When the bear stops to scratch its back against a massive trunk you will be thankful you booked a safari at Pench. 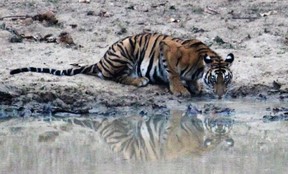 Pench is an ecosystem that supports amazing biodiversity in terms of flora and fauna besides wonderful natural formations and Earthly elements. This pristine ambiance is supported fresh air and free flowing waters of Pench River that intersects the park besides numerous other sources like water holes, lakes, dam and miniscule falls that emerge has sprinkles from edges or the mountains and roll down to sustain numerous life forms.

The table top mountains, rolling grasslands and the snaking rivulets all are composite landscape of this tiger land in Central India or Madhya Pradesh. The dense tropical mixed deciduous forests enshroud the whole ecosystem leaving jagged edges of rocks and mountains bare. The unique spectacle created is in simple terms mesmerizing.

The tall stands emerge as from the earth to assemble along with thick understory to create a mesh of greens which are difficult to preen through. It is a complex web of life forms that form the understory and crown cover as well. Grasslands give way to open sky but then they are crucial for support of herbal life the deer and the antelope.

Predators roam in the forests and amid grasslands silent, hidden and well camouflaged to strike down their prey.  Night and Day the drama unfolds and if you happen to be on safari at that moment you will experience a memorable moment.

Outside the reserve forests and humanity prevails. Thick stand give way to sparse vegetation at places among the hamlets and this is where the wolf survives. The hamlets now support a large population of young naked children and perhaps there is a Mowgli among them.

Denizens of the Jungle 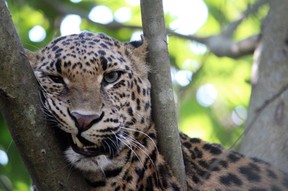 Kaa, Baloo, Baghira, bandar log, kabaki all survive in what is now Pench Tiger Reserve. Named after the river it is a conservation unit and a National Park as well.

The safari offers something unique an action you have been waiting or an antelope you have  not seen for a long time. The park is home to Nilgai the towering blue bulls with rufous tawny females large and graceful as antelopes always are. Not as abundant in other reserves Pench is the best place to sight them and take pictures. Any reserve you visit for excursions the sloth bear is a rare sight but it is more often sighted here.

Only antelope with four horns the chausingha is a sight to behold although they inhabit drier rocky surfaces and plains nevertheless the park is home for them.

In these sylvan confines the big cat is the focus of attention, and it is seen often on game rides. Tigers can be seen hunting moving around with cubs at waterholes as well as under the shade of trees in a complete relaxed state. But another big cat that survives in these jungles is the leopard diminutive but equally spectacular and graceful this creature is much less seen. Wildlife enthusiasts yearn to catch a glimpse of this illusive cat and it does not disappoint them. You can encounter a leopard in Pench just about anywhere they are so adaptive. You will find the animal lurking near the villages, in the outer ring of the forests as well in the core area. Besides Sher Khan it is the most photogenic creature on this planet.

Wolf is an open country animal and you can see the creature in the outskirts where there is a conflict between man and animal. That is why the population of this canid has decreased with survival almost precarious. These are most sought after predators and you can see them only at Pench on a wildlife safari.

Amazing creatures reside here in this amazing jungle. The tiger landscape encapsulates amazing geographical features that create a stunning visual unforeseen and unbelievable charisma. That is how Pench Jungles hold people in captivity by its mesmerizing and spectacular panorama.

Seooni Hills! As Kipling would have mentioned have shrunk to a great extant yet much remains. More has to be discovered than found during Mowgli's era birds, butterflies, bees, insects, reptiles and mammals. This is a fantastic assemblage of the living in the realm of the tiger.

Seoni is a small town existing in obscurity as it did during Kipling's era but it holds the mysterious jungles in its folds. Magical forests that still enthrall those who experience them. The tiger landscape is proving crucial for the survival of big cats in India and facilitates tourism to generate revenue and for the finest safari holiday in the wilds.

For those seeking excursions in wilderness Pench tiger safari is the best. It is just ninety kilometres from Nagpur Airport and a five hours drive from Jabalpur Airport. Discover Kanha another Kipling Country at distance of five hours.

For accommodation Pench Jungle Home is ideal for luxurious stay. Discover the tiger land while you holiday at the resort.

Elephant rides in tiger reserves is not allowed anymore. They are used for patrolling by security staff of the reserves. They usually carry tree branches in their trunks besides hosting the mahout or the elephant rider sometimes guest may be on board too but number depends upon the size and age of the animal. In think preferred range would be ten years?

pateluday, Thank you for the practical information, pretty pictures and product lines.
Is there a preferred age range for the elephants who carry people and possessions? Is there a maximum number or weight load?
Some people, when they aren't driving, like the front passenger seat and others like the rear seats in a car. Would there be some seating deemed more comfortable or more prestigious on an elephant ride?

Chennai (formerly Madras) is the fourth largest city in India and the capital... 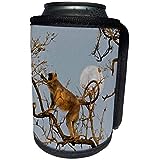 Chennai (formerly Madras) is the fourth largest city in India and the capital of the southern Indian state of Tamil Nadu.
46%  5   4 DavidPaulWagner
India