Have your kids seen Ghostbusters and want to dress just like their favorite character? From the jumpsuits to Slimer, you'll find the perfect costume for Halloween night right here.

It's a scary movie, but with a hilarious twist.

Even as it nears its 30th anniversary, it's still fresh and delightfully scary.

Your kids probably won't believe you, but you saw the guys on the big screen when you were their age and you even wore your very own Ghostbusters costume way back in 1984.

Good things always come back in style, and now your kids can enjoy the thrill of dressing as their favorite Ghostbusters character this year for Halloween.

Dressed in style like Egon and Peter, kids can catch some ghosts on Halloween night.

When you've got spooks running around your neighborhood, who ya gonna call?

The ghost busting gang won't have to fly in from New York, because there's a chapter of Ghostbusters right next door. They'll be doing their yearly maintenance patrol on Halloween night, and they'll be wearing the official Ghostbusters gear.

The jumpsuit is a near exact replica of the costumes worn in the movie, complete with the official emblem on the sleeve. It also comes with an inflatable proton pack, a handy tool for all those ghosts and goblins that will be out on All Hallow's Eve.

It's available in child's sizes small, medium, and large. Reviews about this costume are mixed as far as size goes. Some have reported it running large, and just as many have reporting it running small.

When ordering, there is a measurement chart to refer to, so be sure to look for it before checking out.

Available in sizes small-large in brown or tan.

Do you think Janine would let the guys go out and have all the fun on Halloween night? It's not just the boys that are out there fighting specters on Halloween. The girls will be out on patrol, too, canvassing the neighborhood for more than just candy.

But who says you have to fight the Underworld in a generic jumpsuit? Your little diva can be fashion-forward in her lovely Ghostbusters dress and hat.

It's also available in sizes small, medium, and large, but in your choice of brown or tan.

Unfortunately it doesn't come with a proton pack like the boy's costume, but a proton pack backpack can be bought separately from Amazon that would do the trick.

Baby wants to whoop up on some ghosts, too.

Ghostbusting can be a family affair, and even the baby of the family wants to make sure the world is free from any scary old ghosts that might be lurking in their closet.

The ghost romper fits sizes 2-4. It has an attached backpack, which makes a perfect place to store Halloween candy. The Ghostbusters hat tops off this outfit to make it the most adorable baby costume ever.

Ghostbusters Gifts for Your Little Ghouls:

The little green guy wants to be the life of your party.

Slimer has a special place in everyone's heart. To adults he's green and gooey and cute. But to kids, he's cool because he slightly resembles something that would come out of their nose.

But being Slimer doesn't mean they have to be gross. With this cool inflatable Slimer costume, they can slime everyone they know without all the mess.

It's kept inflated by a battery operated fan that's secured on the inside of the costume. It does contain small parts, though, so I'd recommend this costume for older kids only.

It comes with a headpiece, inflatable body, and gloves, so pair it with neon green or black leggings or pants to get the full Slimer effect.

When your kids run up to you and give you a big hug for buying them their Slimer costume, you will truly be able to say you've been slimed.

Near the end of the Ghostbusters movie, Ray couldn't clear his mind and thought of the most harmless thing he could: the Stay Puft Marshmallow man.

The guys found out the hard way that he's fluffy and cute until you tick him off, then watch out because he's hell-bent on destruction.

Luckily, these costumes are puffy and adorable without any of Stay Puft's need to wipe New York off the map.

The child's size is one size fits all. It isn't clear what the size range is, so for older kids, I recommend buying the adult version to make sure it fits. The toddler Stay Puft costume fits sizes 2T-4T.

All versions consist of a shirt, pants, and a hat. For older kids who want to amp up the scare factor, the inflatable Stay Puft Marshmallow man costume looks absolutely creepy.

The easiest way to be a Ghostbuster for Halloween.

I think I would like to be Slimmer. Though one of the ghostbusters would be good too.

That's too bad. I bet they'll be great. I guess maybe we'll all be more in the spirit of Halloween by then though.

I want to make my zombie make up tutorials so bad but I can't make them for another month! Moving really bites. -_-

You are so funny, Kait! It is an awesome costume. It would definitely win first prize in a contest.

The Slimer costume is hilarious! If I had a kid, I would force them to wear that for Halloween.

He was (and still is ) hilarious. I feel so old knowing it's been 30 years since it came out.

The Unconventional Guide to Ghostbusters Gifts and Collectibles

Who knew the funniest scary movie you ever saw would be so popular 30 years l... 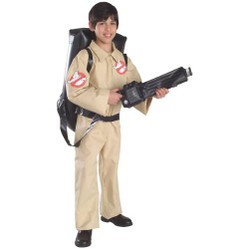 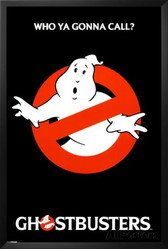 The Unconventional Guide to Ghostbusters Gifts and Collectibles

Who knew the funniest scary movie you ever saw would be so popular 30 years later? Shop down memory lane back to 1984 when Ghostbusters was everywhere!
92%  7   10 pkmcr
Halloween Costumes for Kids