Wiccans aren't very good at being told what they can and can't wear, especially when it involves their own handfasting. Anything goes! (But especially red wedding dresses.)

The bride wore purple at the first handfasting I ever performed. A different bride wore blue for the last. In between I've seen all colors, formal and informal, whatever took her fancy.

There are no hard and fast rules governing this. She is the Goddess Bride personified, so far be it for us to dictate her fashion etiquette on her big day. However, I have been asked about traditional wedding dresses for Wiccans, and there is an answer I can give.

Handfastings move the bride from Maiden into Mother. The color of her wedding dress would be red or white.

What Color is the Bride's Dress in a Pagan Handfasting?

It's whatever color she wants it to be. There are no Wiccan laws of etiquette even attempting to make a judgement on this one! 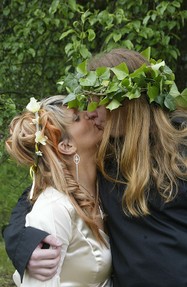 The bride will be the one standing in the circle alongside the groom (or another bride, if this is a lesbian handfasting).  Other than that, it can sometimes be hard to determine her from the other ladies present.

In Wicca, no book, no High Priest and Priestess, no vision from the Goddess Herself will demand that the bride wears a certain color.  While guests at Christian weddings avoid white, and those at Sikh weddings avoid red, it takes some discreet questions to dodge clashing with a Wiccan bride.

I told in Fifteen Years of Wiccan Weddings about an impromptu handfasting.  The bride was wearing what she'd had on all day.  The only addition was a garland on her head, created from whatever was quickly found in the riverside hedgerow.  She was no less handfast for that.

In all that time, I've seen every color of the rainbow.  Each bride picks her favorite hue, or that of the most gorgeous gown or robe in the shop. I've seen plenty arrive in green, as that's the color of the natural world at the height of spring.  Beltane or Summer Solstice are such common dates for handfastings!

Or they've arrived naked.  That's an option too.  It's precisely what happened in the Witch Wedding described in Stewart Farrar's What Witches Do.  This ceremony was performed indoors, out of view from passers by.  The Alexandrian coven adorned a couple of cloaks in the richest possible way, but they were worn over the naked forms of both the bride and groom.

It's way too cold to do that outdoors, at least in Britain. Traditional Wiccan bridal wear moves then to the next level.  We ask ourselves what precisely is going on here for the bride.

The Maiden: Three-in-One Goddess of the Witches
The Triple Goddess is a major deity in Wicca. She is a single being, who is viewed as three divine women: Maiden, Mother and Crone.

The Mother: Three-in-One Goddess of the Witches
The Triple Goddess is a major deity in Wicca. She is a single being, who is viewed as three divine women: Maiden, Mother and Crone.

Maiden to Mother, White to Red

So what color symbolizes the Mother Goddess in the Three in One?

Womanhood didn't come with the handfasting vows.  You don't get pregnant by leaping over a broomstick (not without a little more activity anyway).  But married life is well within the preserve of the Goddess's Mother aspect.

Therein lies the clue to the most traditional colors for a Pagan wedding dress.  You could enter as the Maiden wearing white; or you could stand there as the Mother wearing red.  You could even treat this as a transitional stage and wear a combination of white and red.

Yes, I know that two look distinctly purple or blue, but there are red options when you visit the site.

Even more wedding dresses in red!

Buy Red Wedding Dresses and Gowns on a Budget and Save
The latest trend in red wedding dresses has the price soaring and yet you can get your hands on affordable red wedding gowns. Save your money for the honeymoon, learn how now.

Practical isn't usually a word associated with wedding clothes, particularly that worn by the bride. But I've seen more than one become unstuck by her surroundings.

The fact is that the majority of Wiccan and other Pagan wedding ceremonies occur outdoors.  They tend to be on top of hills, in the middle of stone circles, in the heart of a forest or smack bang in the center of a field.

This is not the terrain for high heels and delicate slippers.   In any other situation, you'd be in hiking boots.  It's also not the perfect environment for gowns which sweep the floor majestically.  You'll never see a long train dragged along after a Pagan bride.  It would be horrible to remove the grass stains!

Some brides opt for lifting long skirts away from the ground with their hands, until they're in position.  Others get a shorter dress to begin with.

The trick is to test out the terrain first.  Visit with friends or the groom, so you can see what clothing would be appropriate.  There would be nothing more heart-breaking or undignified than getting trapped in foliage, because your dress couldn't make it through to the handfasting circle.

Each of these are available in both white and red, so take your pick! It would be better if each had a touch of the other color too.

The Best Wedding Dress for a Pagan Wedding

Just to reiterate a point here.  I may have spoken about red and/or white dresses (or nakedness) as the best bridal wear for a Wiccan wedding, but that's not written in stone.

It makes sense as a reference to the Bride as the personification of the Goddess. That is how she will be presented in the circle.  She's taken on the aspect of the Mother, and red is Her color.  She came into the circle as a Maiden, and white is Her color.

But so are all of the other colors.  Just because one color symbolizes each aspect of the Lady, it doesn't mean that our world is devoid of all else.  Nor does it mean that deity will frown on any other color choice.

The best Wiccan wedding dress is that which the bride wants to wear, feels comfortable wearing, looks beautiful wearing (which will be everything on a day like that) and won't sully in the terrain. The field is wide open.

Oooh! Congratulations! Don't be nervous. I'm sure it'll work out fabulous on the day.

And that sounds like the perfect setting for a handfasting. You are very lucky. Here in Britain, we never know what the weather will be, but we assume dire. :)

Oh my... I'm so nervous... I'm engaged and I'm really happy my fiancee accepts me for me. I live in Hawaii and I'm planning to have my handfasting outdoors. And since the weather is JUST RIGHT every time, I won't have to worry about freezing my cheeks off in Samhain :)

I'm very glad to hear it. Blessed be, especially as you're becoming handfast.

Thank you for all the information. I have no relatives that are wiccan and I have few friends who are. My fiance and I are both Wiccan and were unsure really of what to do and or wear. This has been a major help, thank you so much.

Thank you very much. Did you find any that you particularly liked?

A very interesting article and pictures of really lovely dresses.

I should have mentioned that flowers in the hair is de rigeur! Purple dresses are beautiful for a handfasting. Great days.

its bringing back memories of what i wore at mine ... purple dress and flowers in my hair ... arhh those were the days eh?

You chose the colors of the goddess! I bet you looked stunning. But your poor mother!

Thank you for reading. I'm glad that you enjoyed it.

Mine was not a Pagan Wedding but my dress (to my mother's horror...lol) was red, white and black. The look on her face when I returned from "wedding gown" shopping was one I will never forget! The dresses you have included in your article are beautiful! The article was informative and interesting. Thanks Jo! I enjoyed reading it.

In a Wiccan Handfasting, the Bride takes on the aspect of the Goddess Herself... 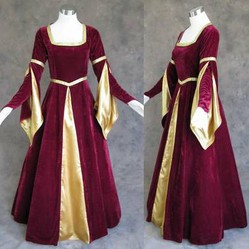 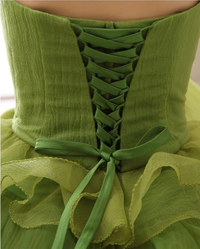 Traditionally, Beltane bridal dresses are green, red or white/silver. To match the Lady as a May Queen bride, you will need to don a green handfasting gown.
62%  4   7 JoHarrington
Pagan Ceremonies 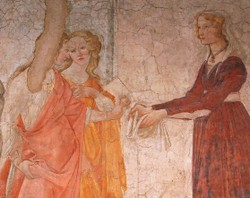 In a Wiccan Handfasting, the Bride takes on the aspect of the Goddess Herself. But where does that tradition come from?
Loading ...
Error!