There has been an outbreak of people spewing hate on social media. This article examines the phenomenon known as "trolls"

What the world once believed to be creatures of myth have been proven to in fact be quite real, and are a thriving, growing population. These creatures who were thought to dwell under bridges in stories actually reside under Instagram and Facebook posts, among other places in the realm of social networks. The world has no option but to believe that these creatures do in fact exist.

Having accepted their existence, scientists have researched how trolls feed and grow.  They’ve concluded that trolls’ lives seem to depend on a sort of respiratory function wherein they expel negativity in order to feed their own egos; insecurities seem to be especially filling.  They project their negative ideas onto others who, the trolls believe, have all but made themselves targets by posting in the first place.  In doing so, they feel a sense of importance as their opinions have left a mark, more so if it receives a response from the intended victim. Trolls revel in the attention.  No longer are they thought of as creatures that lurk in the shadows below, but are vicious hunters who stomp proudly upon the networks that bridge the gap.

There are some people, however, who would rather not be seen as victims and, because of this, they seem to be the ones who attract the most trolls.  Trolls like challenges.  In these cases, the assault does not seem to only target the person who posted, but others who have left positive comments under these posts.  Trolls then launch blitz attacks; it is psychological warfare.  The military might also be interested in the operations of trolls.  The people who fight back may end up eventually having to block these hideous trolls in order to stop the constant assault, a lot of work for creatures who are unknown to their attackers, their very existence questionable.

The ugliness of these creatures is not just surface, but the type that goes straight through to the bones.  Often, however, their nature is hidden by presenting themselves in pretty packaging, a skill they have learned in order to coexist with humans.  These are the most dangerous.  They have focused so much on their packaging that they become threatened by people who look nice, conscious of the fact that wrapped or unwrapped, these people are beautiful humans, while they are just trolls.  What they don’t know is that in their desperation for attention and feeding off people, trolls are in fact making themselves uglier, and they have an insatiable appetite.

They are a vicious group.  As such, trolls have claimed victory over many, who have subsequently exiled themselves from the realm of social networks.  They have formed gangs, and shout their war cries by tagging their allies in to assault their targets.  Many people do not have the energy to combat these evil forces and so wave their white flags and retreat into the shadows, where trolls once lived.  Trolls have amassed great power, and are ready to exercise it.

Once upon a time, there were stories about mythical creatures who lived under bridges, and terrorised people, or animals, who tried to cross them.  Trolls were alive on the pages of fairy tales.  Today, we have come to see that these creatures have leapt off the pages of storybooks, and onto the social network pages of the new victims of their terror.  Trolls are not myths.  We have accepted that they share space in our reality.  The question now is: How do we get vanquish trolls?

Trolls thrive on, well, everything! Negative, positive, like, dislike, doesn't matter they're there. Even if you ignore them!

Thanks 😊. No personal experience with them though. I was writing on behalf of friends who have had the experience, as well as other people I don't know but I have noted.

Simply ignore them, and they will vanish. 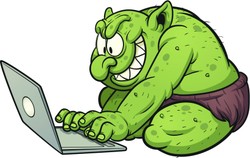