The Roman Catholic and Greek Orthodox both built churches over spots that each believes the Angel Gabriel announced to Mary that she would give birth to Jesus.

The Roman Catholic Basilica of the Annunciation and the Greek Orthodox Church of the Annunciation are so different in design and atmosphere. The former is larger, better lit and modern, with beautiful stained glass windows; the latter is dark and small, with the walls lined with oil paintings and a narrow passage leading to the spring around which the church was built.

Where Did the Annunciation Take Place?

According to the Roman Catholic Church, the archangel Gabriel came to Mary in her childhood home and announced that she would become the mother of Christ. The Basilica of the Annunciation was built over this place.

The Greek Orthodox, however, believe that Gabriel spoke to Mary while she was drawing water from a spring about 150 meters away and built the Church of the Annunciation over that spot.

Roman Catholic Church of the Annunciation

History in a Nutshell, Accompanied by Liturgical Music

Greek Orthodox Church of the Annunciation

Accompanied by a Hebrew Song About Being on God's Path

Christian Gifts from The Basilica

What You See at the Basilica

On some travel websites many reviewers rated this site "average" as opposed to "good" or "great". I was astounded at that. Not Christian myself, I was enchanted with this place. It has a bit of everything - an incredibly complex history, interesting architectural elements, international interest and ongoing archeological digs unearthing further evidence of the site's history and meaning.

Complex History - The heart of this church is the grotto which is believed to be Mary's childhood home. By 570 AD, the first church (Byzantine) had been built on this spot. It was later destroyed during the Moslem conquest, later to be rebuilt by the Crusaders in around the year 1100. It appears that the church was destroyed and rebuilt several times until some stability was achieved in the area by the year 1730. The Franciscans maintained the church throughout.  Finally, in 1954, it was destroyed once more and the new contemporary structure complete in 1969.

Interesting Architectural Elements - There are remains of the grotto and of the Byzantine and Crusader churches that were erected in their times. Some of the tile floor has been preserved over the ages. A huge dome in the shape of an inverted white lily focuses light from outside over the grotto and prayer alter. Striking stained glass windows grace the walls of the hall surrounding the grotto.

International Interest - On the wall enclosing the outer courtyard you can view mosaic representations of Mary and Jesus from around the world. These are impressive and beautiful.

I think that the reason for the lukewarm reviews is that people visited the site alone - there are no tour guides at the site. I attached myself to a tour group (and all world languages can be heard) and got the benefit of in-depth explanations that made this a marvelous visit.

Basilica of the Annunciation

This nonfunctional contemporary structure (2000) marks the spot where people living in the area would come to collect water from Roman times until the 1960s. Livestock were usually watered at another place.This fountain was not always called "Mary's Well".

The Greek Orthodox Church is built over another spring from the underground stream that feeds this fountain as well. In fact, recent excavations have found a system of underground passages and a bath.

Entrance to the Greek Orthodox Church

Every Wall is a New Opportunity for Religious Art

The Miracle of Mary's Spring

It is said that women who are having problems getting pregnant can resolve their fertility problem by drinking water collected from the spring in the Greek Orthodox Church of the Annunciation.

My Cypriot friend's wife was having trouble getting pregnant after having had two sons. They wanted a daughter. During our visit to Nazareth, he collected water from the Church spring in a small bottle and took it home to his wife. Soon after that, she became pregnant and gave birth to a daughter.

It is Still Difficult to Live Side by Side

I am saddened and shocked that this sign is allowed to remain in place. This exact spot was the site of Moslem-Christian rioting in 1999 over the proposal to build a paved plaza for Christian pilgrims whose arrival in large numbers was anticipated for the millennium. Moslems wanted to build a mosque there, claiming it to be the burial site of a nephew of Saladin. When the municipality was unable to find a way to resolve the issue, the Israeli government had to reject both these projects.

This sign should have been removed long ago. I cannot imagine why it still remains.

Gifts for the Believer

I love it when Christian friends come to visit me in Israel.

My first experience was when a colleague and friend from Cyprus came and I organized for him a "Christian Tour of Northern Israel". It is because of him that I began to explore the Christian roots in this country.

Then last year I had the pleasure of joining friends from Australia on their one-day guided tour of Christian sites in the north.

Each time, I learn something new.

Travel Books for the Christian Tourist in Israel

Have you visited Nazareth and seen these two churches? Would you like to visit?

John - I hope you do find those photos. 1974 was really a different era in this country. So much has changed. Maybe time for another visit - and we'll order days for you that aren't raining.

I was there in early 1974. I remember it was raining. I don't remember which churches I visited. I'll have to dig out those really old photos and see.

Of course, Sam. Happy to give you a tour. Coming with the dog or without?

Lovely article Sheri! If I ever make it to Israel, I hope you give me a guided tour also ;-) SY

You don't have to be a believer to be entranced with the idea of standing in ... 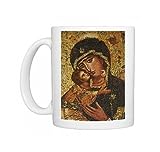 Bruce Feiler provides a riveting introduction and welcome review of what ancient sites and modern cultures have for readers and viewers Walking the Bible.
45%  6   4 Sheri_Oz
Israel 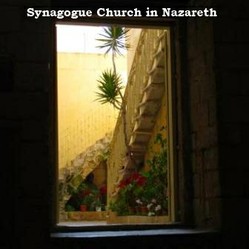 You don't have to be a believer to be entranced with the idea of standing in the spot where Jesus is believed to have announced that He is The Messiah.
Loading ...
Error!