The USA has formally been charged with the "cruel, inhuman and degrading" imprisonment of Bradley Manning by the UN Special Rapporteur on Torture.

The United Nations has officially stated that the United States of America is contravening international law on torture.

This ruling will come as an embarrassment to a nation, which has always prided itself on morality and right in the world today.

Eleanor Roosevelt, the wife of one of its former presidents, was instrumental in drawing up the human rights laws.

Private Bradley Manning's incarceration without trial, in unacceptable conditions, is the issue here.

The United States of America has been torturing one of its own citizens. 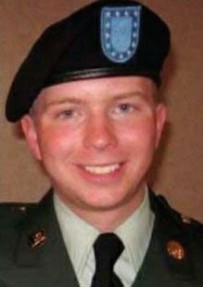 After 14 months of investigation and deliberation, the United Nations has officially declared that the USA is guilty of violating the Convention Against Torture.

Bradley Manning, a Nobel Peace Prize nominee, has been locked away without charge since May 2010. For 11 months, that meant being in solitary confinement for 23 hours a day, under a strict regime of supervision.

This is in contravention of Articles 1 and 16 of the Convention, which the United States of America signed in 1988 and ratified in 1994.

At the 19th session (PDF) of the UN Human Rights Council, on February 29th 2012, it was noted that the USA have repeatedly hindered the efforts of the Special Rapporteur in its investigation.

Specifically, the UN have been unable to assess the mental and physical well-being of Bradley Manning, as it has been illegally refused permission to hold private, unmonitored conversations with him.

This refusal is also in violation of Article 16 of the Convention. Moreover, it denies due process to ensure that Article 1 is not also being breached, as many commentators fear.

Speaking on behalf of the UN Committee on Torture, Juan Mendez told The Guardian newspaper that the treatment of Manning "constitutes at a minimum cruel, inhuman and degrading treatment in violation of article 16 of the Convention against Torture. If the effects in regards to pain and suffering inflicted on Manning were more severe, they could constitute torture."

Ray McGovern served in the US army, before working for the CIA for 30 years. He briefed the White House during the 1980s.

What is Article 1 of the Convention Against Torture?

This part of the bill ensures that individuals aren't tortured into making a confession or imcriminating others.

In short, no nation can torture someone under any circumstances. This includes both physical and psychological harm, both of the individual and their loved ones.

It's a very wide-reaching article, which also covers torturing someone to gain a confession; and/or to force them to name their accomplices.

Learn more about the victim of judicial torture in these biographies of the alleged WikiLeaks whistleblower.

How Did the USA Breach Article 1 with Manning?

Everyone starts looking very pointedly towards Julian Assange and WikiLeaks right around now.

The sticking point here is both in the nature of how Bradley Manning is being held; and the suspected reasons why.

The latest UN ruling (PDF) states that 'solitary confinement is a harsh measure which may cause serious psychological and physiological adverse effects on individuals regardless of their specific conditions.' This amounts to torture under international law.

If that wasn't bad enough, then the motivation behind it seals the deal.

It is widely believed that Bradley Manning is being incarcerated in such conditions, without adequate trial nor hearing, to make him talk. He reportedly provided classified military documents to Julian Assange, which were subsequently published on the WikiLeaks website.

The documents and, in particular, video footage embarrassed the US regime, as they provided evidence of human rights abuses in the Middle East. Nothing could be done to stop them going public, but the supposed source was an American citizen. Bradley Manning was quickly arrested and hidden behind closed doors in a military prison.

The problem for US prosecutors is proving that he did anything. Also there is a much bigger goal here. Even if Manning is guilty (and he should be presumed innocent until he is eventually found to be otherwise in a court of law), then he is simply one whistle-blower.

Julian Assange is the real catch. US officials have made no secret of the fact that they want him silenced. Some senior members of the administration have even called for both him and Bradley Manning to be killed.

However, no extradition can be served on Assange (who is an Australian citizen) without proof of a crime committed in America. He maintains that he's merely a journalist, who believes in openness and accountability.

What would help the US case enormously is Bradley Manning confessing something which implicated Julian Assange. The fear is that this is precisely what the torturous incarceration of Manning is about.

This is a view that has been hinted at by the UN's Special Rapporteur on Torture. In an open letter (PDF) to the United States, dated December 30th 2010, Juan Mendez wrote, 'The prolonged period of isolated confinement which Mr Manning has allegedly been subjected to for seven months is believed to have been imposed in an effort to coerce him into 'cooperation' with the authorities, allegedly for the purpose of persuading him to implicate others.'

If it can be established that the USA is definitely torturing Bradley Manning, in order to use his 'evidence' to arrest Julian Assange, then this is a second strike against Article 1 of the Convention.

Buy these films to learn more about WikiLeaks and the people caught up in its story.

Learn more about Wikileaks and its founder, the organization to which Bradley Manning is alleged to have given information.

What is Article 16 of the Convention Against Torture?

This part of the bill ensures humane imprisonment and trial.

In short, this article places the onus on individual nations to prevent any 'cruel, inhuman or degrading treatment or punishment' from happening within their borders. Any allegation of the same has to be fully investigated.

Books on the UN Covention Against Torture

Buy these reports to learn precisely what absolute rights defend you against torture under international law.

How Did the USA Breach Article 16 with Manning?

The 23 year old has been held in 'cruel, inhuman and degrading' circumstances.

To keep Bradley Manning for so long in solitary confinement was a no-no; but to then refuse to allow the UN inspectors their legal right to see him crossed a serious line.

The United Nations report details every formal and informal request to gain access to the young man. It concludes with the words, 'Regrettably, to date the (US) Government continues to refuse to allow the Special Rapporteur to conduct private, unmonitored, and privileged communications with Private Manning, in accordance with the working methods of his mandate.'

The natural reaction to this state of affairs is to wonder why neutral legal observers have been kept away from him. What are the officials afraid of them hearing or witnessing?

Article 16 was added to the Convention Against Torture for a variety of reasons. The main one is plain common sense. No victim is going to speak freely in the presence of their tormenter, particularly when he or she will be left alone again with them later on.

But there are other motivations too. One of those is to prevent brainwashing, undue intimidation and mental cruelty, by ensuring that those incarcerated have a full understanding of their status, and insight into the reality of their case.  It's a fail-safe against a prisoner being lied to or their rights being misrepresented.

The obstruction of the US government might not be fear of what Bradley Manning will tell them, but what the Special Rapporteur might tell him.

If the Article 1 fears are correct, then the last thing his torturers want is for anything to strengthen his resolve.

I didn't know that. The more I hear about Thomas Jefferson, the more amazing he seems. Everything he said turns out to be a great quote. It's a pity that he couldn't live forever. :(

The treatment of Bradley Manning not only contravenes the UN Convention Against Torture but it also goes against the United States Founding Fathers' beliefs on human rights.
Here is what President Thomas Jefferson said in his First Inaugral Address (1801): "...freedom of religion; freedom of the press; freedom of person under the protection of the habeas corpus; and trial by juries impartially selected -- these principles form the bright constellation which has gone before us, and guided our steps through an age of revolution and reformation."

Throughout history, the dominant players ebb and flow, often rising to the top on hypocrisy. I like to think that it's all moving in the right direction though. Maybe one day people will be able to genuinely wonder what human and civil rights abuses are, because it'll be inconceivable to commit any.

I love my day-dreams.

Exactly! That is why USA should stop pushing nose into other's business. We all know democracy is the last thing they care about. And that is case for most countries in world. After all they all keep their own interests on first place.
I am sorry to hear about the prisoners being held in prisons for nothing, or at least not knowing what are they kept for.
And todays it is imperative to find a responsible person, no matter if it is right person. Regimes will make them responsible for something.
I don't won't to offend someone commenting this way. I have nothing against Americans, or any other man or woman in the world. I am talking about goverments.

They are definitely too countries whose names keep cropping up, though I'm hard pushed to find any nation with a squeaky clean human rights record. Particularly my own, with the legacy of the British Empire still oozing blood over our hands.

Why am I not surprised? Iran, USA, it is all the same, just one side has more powerful propaganda...
Again, great job on this article!

Things started to get pushed about 20 years go. Since then, and especially since 2001, so much got lost over there.

Welcome to the full Obamanation. Bush carried the bucket the rest of the way and Obama finished the job of ruination of our freedoms and nation.

Then it's up to us to keep on talking about it. :)

They don't talk much about the whole Wikileaks anymore...