Looking for a good unidirectional microphone for your band or vocalist? This a review of a very well-priced, cardioid microphone - ideal for the vocalist in small or large venues.

My band performs almost anywhere. We get invites in different places and we never turn down any invitation. We love performing and is still hopeful that someday; a talent scout would be able to spot us and give us our recording contract. It is with this hope that we are sometimes choosy with the equipments that are provided with our gigs. We would want to be seen playing and producing the best sounds available.

However, not all music productions have high budgets with regards to their equipment so we had to bring our own things. We have searched different shops for a good microphone; that is usually a problem. One day we found out about the Shure 55SH Series II Iconic Unidyne Vocal Microphone (The Elvis Microphone) and invested in it. Now, our vocalist does not encounter any more irritating problems regarding the microphone.

Product Description:
People are really not going to make any mistake with purchasing the Shure 55SH Series II Unidyne Vocal Microphone. This microphone has the Shure presence peak characteristic. It also features the cardiod unidirectional polar pickup pattern. This would allow people to use their microphones even against or near the speaker and they would not hear or create any feedback problems. This kind of pickup minimizes the sound pickup from the microphone’s rear side. With this, people would be able to use their microphones in close proximity to speakers.

The frequency response on this microphone was also adjusted to be able for the microphone to be used in different purposes. It is not just good for people playing music and singing songs. It is also good for picking up voice from speeches and even from musical instruments. People who want to play acoustic performances can use this microphone to pick up the sound from their instruments.

The Shure 55SH Series II Unidyne Vocal Microphone also features a cartridge shock mount which allows it to reduce noise. With this microphone, people who love doing recordings can easily do them without worrying about making some unclear recordings.

The Shure 55SH Series II Unidyne Vocal Microphone also has a die-cast chrome-lated look that makes it stand out and appear to be of vintage look. This would look great on the stage and different places where musicians and others would be performing. It may look like a microphone from the 70’s yet perform extremely well because of its modern components.

Product Features:
The Shure 55SH Series II Unidyne Vocal Microphone combines the classic vintage look with modern technology because of its great performance. The frequency of this microphone’s pickup is suited for vocals and even musical instruments. With its cardiod unidirectional polar pickup, people would have no trouble of where to put their microphones on the stage since the rear side does not pick that much sound so there would be no feedback problems. It also has a cartridge shock mount that reduces noise and a rugged die cast chasing that protects the microphone.
When we started using this microphone; our vocalist does not need to be set up further on the stage in order to avoid feedback. Now, she can come close to us and sing our songs while we play the notes without worrying about causing any feedback problems.

People can also use this kind of microphone without any problem in places with adverse acoustics. This set this microphone on a different level than those that have been present in the market for too long already, really cheap for its amazing performance and great looks.

How To Chose An MP3 Player

Learn how to make an inexpensive case for your new ukulele using the cardboar...

How To Chose An MP3 Player

MP3 players are extremely popular and convenient. MP3 players are discussed here to help you decide which will be best for you.
96%  6   12 enslavedbyfaeries
Cases 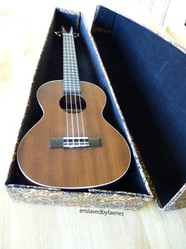 Learn how to make an inexpensive case for your new ukulele using the cardboard box it was packaged in when you bought it.
Loading ...
Error!