Why St Patrick's Day is More American Than Irish

Everyone the world over associates St Patrick's Day with Ireland. But the parties, parades and celebrations began in the USA with Irish-Americans longing for home.

We all know how to celebrate St Patrick's Day. It involves drinking copious amounts of alcohol, while dressed in green and singing endless verses of 'Danny Boy'.

All over the world Irish themed pubs are filled to capacity on March 17th. Everyone is there to have a good time, while drinking to the health of St Patrick, Erin and each other. The craic is enjoyed by all.

But go back even 100 years and the Irish would be quite startled by this behavior. The traditional St Patrick's Day celebrations were imported into Ireland from America.

St Patrick is the Patron Saint of Ireland, but his day wasn't widely celebrated even in Ireland. It was the Americans who established that practice. On March 17th 1737, there was a St Patrick's Day parade held in Boston, Massachusetts. In many ways, it was a marketing excuse. It was held by the Charitable Irish Society of Boston with a view to alerting fellow Irish immigrants to their presence.

It was also the world's first St Patrick's Day parade.

The parade honored the homeland more than the saint himself. As onlookers joined their number, they were led to an open air Protestant service. This wasn't too out of the ordinary. In the early 18th century, most Irish immigrants to the Thirteen Colonies of America were either deported revolutionaries or sons of families from the higher echelons of society. They tended to be Protestant.

After the church service, the Boston Irish sat down to a free meal. It was here where the Charitable Irish Society of Boston set out their proverbial stall. They were there to help impoverished, or merely down on their luck, Irish immigrants gain a stake in the New World.

Word got out. The society was to meet annually, usually for a service and a banquet, but not necessarily with any further link to St Patrick. They didn't hold another parade like that until 1794. It didn't become a fixture until the mid-19th century had brought Irish Catholic immigrants in their hundreds of thousands.

Nevertheless, St Patrick had staked his claim in the Irish-American longing for home, and an even bigger association with the founding of Irish community feeling in the colonies. It was the humble beginning of the St Patrick's Day celebrations, which are now held across the world.

Did South Boston Ban the Shamrock for St Patrick's Day?
The city never did. But business-speak, ill-judged political correctness and Chinese Whispers blew the backlash into global proportions. Find out how!

Over a decade before the American War of Independence, Irish-American militia provided a forewarning of what was to come, all in the name of St Patrick. 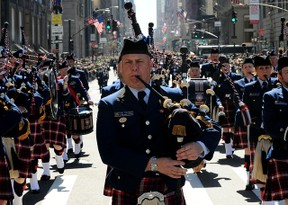 On each occasion, it was less to do with celebrating the saint, than it was to gather disparate Irish immigrants and point them towards assistance from settled Irish-Americans.

Then, on March 17th 1762, a band of Irish-American soldiers marched through New York City. This was something different. This was solely to honor their Irish roots, providing a very visible spectacle of a militia made up of Irishmen in America, while nodding respect back to their homeland.

It told onlookers loud and clear that they were still Irish, wherever they happened to be living. And they were powerful. This is quite important, when you realize that the revolutionary war was just around the corner, and many of those onlookers were British.

Another way of interpreting that march was, 'We're here, we're armed, and we haven't forgotten what you did to us back in Ireland. Be afraid, Englishmen all.'

Books about the New York Irish

It began as a way to raise money through craftwork, and became cemented in blood, before the celebrations could be swathed in green. 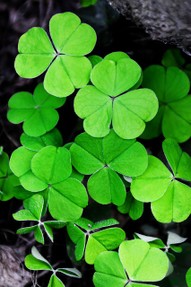 In Ireland, the color most commonly associated with St Patrick was blue. Nor did he have any particular link with the shamrock, other than a retrospectively applied story that the saint used the clover to explain the Trinity.

However, the shamrock appears all over Europe in the spring and therefore it's everywhere by St Patrick's Day on March 17th. That was enough for the ladies of the Irish charitable societies in the Thirteen Colonies. They stitched together green fabric shamrocks to sell as part of their fund-raising.

Suddenly Irish meant green, which would have come as a great surprise back home in 17th and 18th century Ireland.

When the United Irishmen fought back against British Occupation, in the Irish Rebellion of 1798, their soldiers wore green. But it wasn't anything to do with patriotism nor even St Patrick. It was a good color with which to stand out in a melee, so they wouldn't attack their own.

Nevertheless, the Irish emigrants to the USA, in the decades following that Rebellion, took with them the association of the color. They found that the Americans had already linked Ireland with the color green, through the shamrock souvenirs.

Irish-American soldiers - particularly during the American Civil War - habitually began to wear tokens of green on their uniforms, in order to identify themselves as Irish.

By the end of the century, the link was firmly made; to the point that today we still think of the color green as irrevocably tied with Ireland. Even more so on St Patrick's Day, when wearing the green is the most visible way of honoring the Irish and their nation.

All of those Irish-Americans were writing home telling of great St Patrick's Day parties honoring the homeland. In Ireland, they began to think they were missing out. 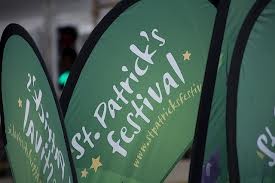 It wasn't until 1903 that St Patrick's Day was officially marked as a public holiday in Ireland. Until then, it hadn't really featured much at all.

Back in the 17th century, the Catholic Church had made March 17th a holy day of obligation for their Irish flock. But it could (and occasionally did) fall during Holy Week, and was easily moved aside to accommodate the greater festival.

It was not a big deal. On St Patrick's Day, for four centuries, the Irish might find their patron saint mentioned during a church sermon. They could pull out the Sunday best for their family meal. But the huge celebrations simply didn't feature.

But as news spread back from the USA, about the great St Patrick's Day parties being held there, a little more of an effort was made. It felt like the Irish were missing out somewhat, on what purported to be their own big day.

It wasn't until 1931 that the first St Patrick's Day parade was held actually in Ireland. Taking over the streets of Dublin, it took as its inspiration the huge events being staged annually in New York City. But with one huge difference.

Two decades previously, Irish MP James O'Mara had successfully petitioned for all Irish pubs and bars to be closed on March 17th. He didn't want the day of a saint to become linked with high rates of drunkenness. That law held until the 1970s, when it was finally repealed.

Finally, in 1995, the Irish government realized that they had something quite special in St Patrick's Day. It was a way to reach out to all those people of Irish descent lost in the diaspora. It was a way to promote tourism into Ireland! Hence huge funds were made available for Irish St Patrick's Day parades and other events, turning a single day into a week long gala.

The Irish-Americans had happily handed their homeland a 'tradition', which could feed the Celtic Tiger in a most secular festivity. More American than Irish, it's done more to promote Ireland and its culture than anything ever homegrown, and continues to do so to this day.

New York City has the biggest St Patrick's Day parade in the world. It comes from all of those Irish families taking up residence in the Five Points and pretty much taking over Manhattan in the late 19th century.

Oh yes, St Patrick's Day is certainly big here in New York State - much more so than in Scotland when I grew up (and that's pretty close to Ireland!)

April - I've found this too! My Irish friends are all up for a party in a pub for St Patrick's Day, but the whole parade thing seems a bit like overkill. But if it brings the tourists into Dublin, then it's all good! I'll have to ask my friend from Belfast if it's big up in Ulster as well. I'm assuming that they've run with it too.

Jo - You've a lot of Irish in your country. As a percentage of the overall population, Australia has the second largest number of people of Irish descent behind Ireland. Though in sheer numbers, the US wears that crown. You might be interested in the Wizzle I did about the international legacy of the Irish genocide. Those fleeing from the Hunger caused democracy to happen in Australia.

Though it's got bigger, Irish friends tell me they find the American celebrations a bit odd.

I had to get stripy tights recently in Christmas Elf colours, for the wee one. They were surprisingly hard to find here, but the US had a ton thanks to the St. Patrick love. :)

In our schools in Australia we all wear green and make a big thing of it. Ned Kelley was Irish BTW
Jo

Ologsinquito - It has become quite big in Ireland too over the past couple of decades! LOL

younghopes - It's quite big in Britain now, ironically. I've had some great St Patrick's Day celebrations in our Irish pubs.

Ember - It really took off where there were a lot of Irish-Americans, hence your hometown missing out. But yes, most of the other things were American, imported back to Ireland! I'd love to witness one of the big US parades for St Patrick's day.

I had heard that Americans celebrate St. Patrick's Day a little differently than they do in Ireland. That's really interesting about the first parade being held in Boston.

The International Legacy of the Irish Potato Famine

Between 1845-1851, the British attempted a genocide of the Irish by starvatio... 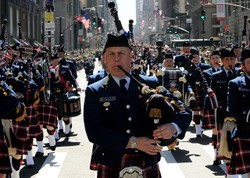 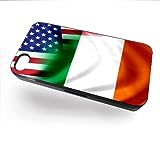 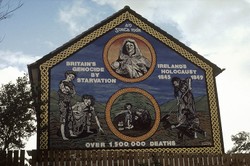 The International Legacy of the Irish Potato Famine

Between 1845-1851, the British attempted a genocide of the Irish by starvation. It's a mistake to think that it's over now. The on-going effects are still felt globally.
Loading ...
Error!