Use of Art in 20th Wartime Propaganda

The upcoming anniversary of the end of World War 2 prompted me to think about the changing use of media propaganda from Art to Social Media - but mainly Art.

Nowadays propaganda is spread by social media - Twitter, Facebook, Instagram. News and adverts are instantly available on Tv and the internet but in the past, the government played subtly to the audience, playing on the emotions but in a less obvious way.

I decided to look at the posters of World War 1 and 2 to see how the artists played on the emotions of the population to get their message across.

The war effort at Home

I have chosen some images from The Great War and World War 2 and will analyse them to give an overall idea of how images and art were used to influence the population.

The images I have chosen show the war effort on the Home Front.

The propaganda stamp "remember always ... nothing German “shows Lady Britannia pointing to a sinking sink. The implication here is that by not buying anything German, Britain will defeat Germany.  Lady Britannia is shown to appeal to a sense of patriotism.

The word GO is the first thing to strike the eye as we look at the poster. Brave soldiers are marching past the window and England’s green and pleasant land stands in the background with its rolling hills. The implication is that the soldiers are fighting for their country. The main feature however is to play on men’s role of protecting their women and children. A taller woman is blonde. Though fearful, she comforts the brunette women who is anxiously by her side. The child is a boy with curls to show his babyhood and vulnerability. He hangs on to the ladies' skirts as he needs protecting and comforting.

How to help at home WW1

In the poster above, the intention is to spur support for the war effort amongst the women left at home, coping alone. Encouraging the women to provide two slices of bread less per day was to reduce the amount of wheat needed and therefore imported. The use of ships in the background and also U Boats gives the message of helping against the German menace. Once again a child is included in the picture to appeal to protective instincts."Defeat the ‘U’ Boat “ is in black letters to instil an element of fear.

Note the use of a child and food. It is a basic instinct to feed our children.

Yet again a child is used in British WW1 propaganda posters. This time though, religion enters in. The child is praying for a brave daddy and as she prays a shaft of heavenly light beams down on the anxious mother and child as if in an answer to their prayer about the Hun. The word "Help " is in large white letters in the glow of the celestial beam.

The protective instincts of men are again called into play.

Who would argue with her ?

My goodness how 25 years between the start of 2 world wars changed the perception of women’s roles! We move from the 1914 weak, anxious image of women at home looking after the house and saving a slice of bread or two, to strong women able to take on any job in factories, on the land or anything else for that matter.

The muscles are being flexed, there are no children there to suggest that a woman is fulfilled in life only if she is a wife and mother. The lady pictured is in a work overall which would have traditionally been a man's item. Her female defining feature of long hair is out of the picture and tied back.

Seriously, where would Britain have been without its Land Army who bravely toiled and kept the nation fed?

Unlike WW1 home front posters, this WW2 poster shows a smiling woman, happy to "do her bit " to help the war effort. This image also shows women in roles which were traditionally male. Furthermore, this is evidence of how soldiers, weary and on leave, were expected to help out on the farms to feed Britain.

The poster above returns to the idea of women on the home front but this time, unlike WW1 women, this lady is helping in a happy positive way by preserving food to help. The pretty blonde child is in the picture so the idea of feeding our children is here. But not only does this wonderful lady preserve food, she also GROWS it too. Mother and daughter are in matching clothes to give an idea of oneness.

Changing role of women as shown in propaganda

This poster shows women in the WAAF, Women's Air Force. While the woman is taking on a role traditionally done by men to help the war effort, note that she has not lost her “femininity“.  Her eyebrows are plucked to perfection, her lipstick is applied. The message here in this poster is that you can still be a woman and join the forces. The picture is next to a woman in pretty clothes.

So often we see the 2 world wars from a soldiers perspective and I wanted here to show the Home Front perspective but how it was “sold" to the those at home by a manipulative government.

Veronica, Thank you for the pictures and practicalities.
Does the United Kingdom have a name -- like Rosie the Riveter in the United States -- that goes along with the posters drawing upon feminine competence?

Thank you Tolovaj. I think the artistry with limited resources makes these especially interesting.

Tolovaj
Excellent analysis and comment. I think the artists had to be even more skilled and talented given their limiited resources.

Thanks for sharing these old posters and your thought (comments included). I just recently studied a development of poster art (especially work by John Hassall) which was definitely impacted by the limitations of technology and resources. It's hard to imagine scarcity of everyday stuff like paper, colors etc. in certain environments but this also stimulated artists to find some creative approaches / solutions which would never be tested otherwise.
I guess it works in both ways - art influences politics and politics influences art.

Find the sinking of the RMS Lusitania on Wikipedia and you will see an image closely resembling the image on the stamp.

All this knowledge and information, I am so glad I posted this article.

Gosh BSG
I haven't heard that one about the Lusitania. That is fascinating. and quite feasible too.
I agree about none such propaganda since World War 2. I would suggest though, it is there but so blatant with Tv and social media, that maybe we don't realise it.

BSG, yes indeed …. … we have been doing jigsaws, cleaning the house top to bottom, crosswords, playing solitaire , garden tidying and I have gone back to my art ..I have completed 4 paintings in the last three weeks …. it is tedious staying home but needs must.

All is well here, except there is little to do.

After Pearl Harbor the mood was rather extreme against Japan, and the racist posters were focused on Japan, not Germany.
I was born in 1947, after the war, but my father and uncles were involved. I also recall when we got television the daily newscasts focused on war, since Korea was going strong. I thought, when very young, that war was always part of society. I might not have all that wrong. But none since WWII have had such propaganda.
As for the Lusitania, some historians now believe, based on how rapidly it sank, that ammunition may have been hidden aboard. Has that opinion reached Britain? I know history has national slants.

Did you know that 1 of the last surviving World War 1 battleships stands in B... 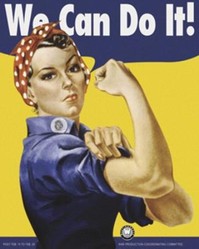 World War 2 ended in 1945, but rationing and food shortages continued. Housewives worked marvels with their modest rations to feed their families. Here's how!
54%  13   2 Veronica
Travel & Places

Did you know that 1 of the last surviving World War 1 battleships stands in Belfast harbour as a floating museum and tribute to the Battle Of Jutland 1916 ? I flew there yesterday.
Loading ...
Error!