Darwin Linn, owner of the well known "Ax Murder" house in Vallisca Iowa has died. A new surge of interest in the 99 year old mystery murder is sparked.

On August 19, 2011, the 74 year old owner of the Valisca Ax Murder House passed away. Mr. and Mrs. Linn have owned the house since 1994. Darwin had admitted once that he had never actually seen a ghost, still had some fascinating experiences and stories to tell. In his own words; "There is something in that house". He was asked once how he would answer critics who say he is making a profit from a historical tragedy. His answer: "I saved a piece of history. It has to pay its own way".

Although Mr. Linn was convinced there was something paranormal about the house, he never feared it. He was more fascinated than fearful. He had recounted many times about the mysterious growth of the "Love Lies Bleeding" plant that grew beside the house while renovations were being done. The plant is not indigenous to Iowa. Some say it comes from Africa, but many who have visited from England say it is well known there. Regardless of the origin of the plant, it mysteriously grew when renovations began, and died when they were completed. Mr. Linn kept seeds of the plant and could not get the plant to grow beside the house again, but was successful when planting it next to the barn.

Darwin Linn believed that there were many spirits inhabiting the house and land. His investigations showed that there may have been Native American burials there. His interest in buying the house was to preserve history. Had he not bought it, it was in danger of being torn down. He kept the mystery alive and welcomed curiosity seekers into the otherwise sleepy little town of Vallisca, Iowa.

Read about the Vallisca Ax Murder

The history and the mystery

On June 10, 1912, sometime between midnight and 5 AM, Josiah Moore, Sarah Moore, their 4 children, and two visiting children were bludgeoned to death with an ax. At a time where serial killers and mass murders were unheard of, it was beyond the scope of belief in a tiny Iowa town. While there was a lot of speculation about the murders, there has never been any proof as to who actually swung the ax, killing 8 innocent people in cold blood.

The ax was found in the room with the Stillinger sisters, who were visiting the Moores. The ax belonged to Mr. Moore. All of the victims faces were covered by bedclothes after the murder. While profiling was not done back then, today investiators may speculate that the killer had close ties with the victims. All of the doors to the home were locked, meaning the killer had to have locked the door behind him.

This tragedy was one that swept through the tiny town of Vallisca, Iowa and has since become a national mystery. Word has spread to other countries of this senseless and mysterious crime, and the house which is said to be inhabited by ghosts. The towns people generally dismiss the idea of hauntings, but some firmly believe, as do thousands of visitors who have taken tours or stayed overnight.

Paranormal investigators from across the globe have been to the house and collected evidence of what they claim are the spirits of the Vallisca 8. The official website of the Vallisca Ax Murder house has more for those who are curious.

If the past is any indication, tours for the 100 year anniversary in 2011 will be booked far in advance.

This reminds me of The Amityville Horror...scary sounding indeed!

My childhood home was haunted, by a ghost of a woman. Throughout the years ma... 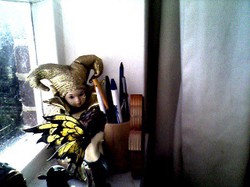 My childhood home was haunted, by a ghost of a woman. Throughout the years many strange things happened in the house. Here I tell of some of my experiences.
100%  12   15 KaitlynDeMetro
Haunted Houses 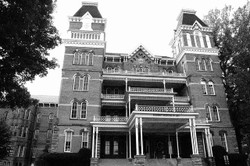 Athens, Ohio is home to Ohio University. Legend has it, it's also home to hundreds of restless spirits.
Loading ...
Error!