Veronica Bright Welcome to My World

At 50 years old, and after years of writing online, it is still difficult for me to write "About me" pages. Heck, it's hard for me to write "about me" paragraphs! I'll start out with just some general information about myself that may be beneficial in understanding who I am.

I am legally deaf. I have been partially deaf since childhood, and over the years it has just gotten worse. I understand and "speak" sign language, although not at a very fast pace, considering. Basically, in conversations, I can hear words being spoken, but I cannot understand what  people are saying. If someone is not looking right at me, I will not hear them at all. This is something I have become quite accustomed to, but many people, including family members, find it very frustrating. I can read lips, but only if people actually MOVE their lips when they speak. You may be surprised how many people don't.

I am easy to get along with....unless I am being difficult ;)

I is a Writer!

Veronica Bright has the Write Stuff?

Since I was a child, I have loved writing. As a teenager, I used to write poems and short stories. In college, one of my Writing Professors wrote on one of my stories "...Let me know when you get published". Now, she may have written that on everyone's work for all I know, but it inspired me to keep writing. One day, I do want to write a book, and I already have the topic in mind. For now, however, I am a web/article/content writer. That's what I do for a living. (Psst...HIRE ME!) I have had one client for 2 years now, and from that client, I obtained another. I also do some work at elance on occasion. In fact, my third client is a keeper from elance.

*Note: The FTC has this issue policy about disclosing affiliate referral information...:I am an affiliate for elance, but I do also write there. If you join as a writer, you will receive, from me, 10 connects in addition to the starter connects that elance gives you.

(*You know, that FTC thing...affiliate links and all of that, but I'd love it if you'd join me there!)

Ask Me About My Kids

Better Yet, Ask Me About My Grandkids!

I've been blessed with 4 of my own children, and 6 step kids. My oldest is Trevor, and although it is hard for me to believe, he is over 30 now! My oldest daughter, Regina, is 24, and my (now) youngest is Katrina. Yes, Katrina. That is a story all itself.

Katrina was born on a very stormy night in July of 1997. There was a spectacular electrical storm that night, and although I was exhausted, I stayed up all night watching it. By dawn, I had decided to name her "Stormy". Well, before the nurse came in to fill out the birth certificate (with her name), a friend of mine came in. She told me I shouldn't name the baby "Stormy" because she might then become "stormy". Well, blame it on the drugs, but I listened to her. I named the baby "Katrina".

From day one, this child was a handful. She cried constantly. Every picture I have of her, she is crying. She never slept, except for maybe 2 hours out of 24. Oy, she was a pistol. I later learned that she was "special". She was special all right! (This is where you learn the material of my future book). Katrina, from the ages of 3 to 14, actively tried to kill me every chance she got. I would wake up to find her holding a knife above her head, aimed right at me. If I tried to restrain her, she would throw her head back and damn near break my nose. The night she tore the towel rack off the kitchen wall and hit me from behind with it, well, it was the last straw. She spent a few years in hospitals and residential settings. Actually, they told me she would be in an institution the rest of her life, but I wasn't having any of that! She came home for good at the age of 13. She doesn't actively try to kill me anymore...but she is still a handfull! When Hurrican Katrina hit Louisiana, and it was called Katrina, I knew God had a sense of humor. I should have named her Stormy.

My actual youngest child, Caleb, passed away when he was 11 days old. He was born with Hypoplastic Left Heart (half of a heart), which was not caught when I was pregnant. He would be 14 now, had he lived. He was a little miracle, in his own way. When I had them disconnect the life support, they told me he would pass right away. He didn't. I was able to bring him home for 5 unforgettable days before he went to be with the Lord. I cherish every minute.

My oldest daughter has blessed me with two of the most adorable children on the earth! Loveyah is now 4 and Jeffery is 3. They light up my life in every way. They lived with me for a couple of years, so I got to see them grow a little during that time.

Oh, don't let me forget my dog, Papi. He is my best bud. He is a full blooded Chihuahua (although he is 8 lbs!), and tri colored. He is completely symmetrical. Every mark on his left side is exacly matched on the right. He was raised with cats, so he thinks he is one! When my Calico cat had kittens, Papi picked one and kept kittennapping it! Cali would go and get the kitten, and Papi would go right back and steal it! He is so convinced that he is a cat, that he used to try to jump onto window sills. That didn't work out too well, and he couldn't figure out why Cali could do it, and he couldn't!

That's my family...in a nut shell (and that's a good place for us!)

My Love of South Dakota and the Lakota Sioux

Several years ago, I took my girls and my best friend on a trip to the Black Hills of South Dakota. There, we met Paha Ska (Orville Salway) on the Boardwalk. I spent some time talking to Paha Ska, and didn't realize at the time, I'd met a friend. I would later become friends with his wife, Susan. Through Paha Ska, and Susan, I learned a lot about Paha Ska's life, and about the Lakota Sioux on the Pine Ridge Indian Reservation.

Since that time, my friend, Rose, and I go at least once a year to Keystone and to the Reservation. Rose now has an adopted family at Pine Ridge, and I do what I can to promote self sustainance and projects for the reservation itself. I am involved in several organizations to help those on the reservation. I also LOVE the art and culture of the Lakota Sioux.

Here is a picture of my girls with Paha Ska. Note that Katrina hated to be touched. When Paha Ska held out his hand, she took it instantly! 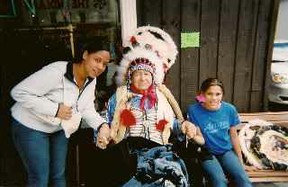 Paha Ska Tours
Susan, Paha Ska's widow does fun and interesting tours in the Black Hills. She also can do personal itineraries. Susan is a former teacher and also does lesson plans.

Pictures from our May 2011 trip to the Black Hills

Well, that is a short synopsis of...well, me! Thanks for stopping by and getting to know me a little better. This is a work in progress, and I will be adding more pictures, information and links. See you soon!

Thanks for sharing your story! So nice to know a little more about you.

Vee, I did not realize you have 10 children! I do remember when the grands were living with you, I think - or maybe I just read about that. I always enjoy reading about your work with the Lakotas. I am glad you are at Wizzley!

So delightful to learn a little more about you, Veronica. You have been an inspiration to me and many others. I so look forward to reading more of your wonderful writing.

I've so often seen your name crop up since I joined Squidoo, Veronica, and it was wonderful to get a chance to meet you properly. Your family (two-legged and four alike) sound like real characters and keep life interesting for you!