Vintage Wells Enamel State Charms With Their Slogans On The Back - Collectible, Colorful, and Fun

One of my charm collections is a set of enamel sterling silver US state map charms. These were made by the Wells Sterling company in the 1940s and 1950s. Each has a colorful enameled front with state specific cities and symbols; and a state slogan on the back. The Wells catalog was called the Top Hat catalog some of the charms have a little top hat on the back in addition to the Wells hallmark.

I don't have the complete set yet so I'll add photos as I buy them. But there are enough for readers to get the idea. Once I have them all I'll put them on the perfect silver bracelet and wear it proudly on patriotic holidays. It's likely to be too heavy or noisy to wear as an everyday bracelet.

I'm Only Missiing A Few In My Collection

Alaska and Hawaii Are Not Included In The Set

Notice there are no Alaska or Hawaii charms. These were made before they became states. I've got an old Wells catalog (pictured) that shows the entire set and it shows only 48 states. These took me a long time to acquire, mainly because I just bought them every now and again when I happened to see one, and didn't actively pursue them. I hope you enjoy my vintage Wells State Map Charm Collection.

I have a quiz on state mottos or slogans on my Charmchatter blog.  I suggest you finish looking at the pictures on this page, and then head on over and see how many you remember.

Vintage Wells State Map Charms – How Many Slogans Do You Know?

**** Disclaimer**** - These may not be the current or official state slogans - they are the ones the Wells Top Hat Company used for the state map charms.

I Bought Most Of My State Maps on eBay

Collecting Vintage Matchbook Charms
My collection of vintage sterling advertising matchbook charms is growing more colorful. I'm always on the lookout for more.
Monet Charms – To Collect Or Not?
Question for my readers - Do any of you collect vintage Monet charms? If so what kind? Do you collect a particular theme, a metal color, etc. Are you happy with them,...
Damaged and Broken Jewelry – Before You Throw It Away
When I have broken or damaged jewelry, and that's pretty often being in the vintage jewelry business, I've got a few choices for dealing with the pieces. Years of exp...

Tennessee - Was given the nickname the Volunteer State during the war of 1812, when volunteer soldiers helped win the Battle of New Orleans.

Texas - Called the Lone Star State because of the star on the 1836 flag of the Republic of Texas.

Virginia - Called the Cavalier State, this nickname is derived from the supporters of King Charles (Cavaliers) who came to Virginia during the English Civil War.

I've been collecting vintage charm bracelets for about 10 years and Charms and Charm Bracelets, The Complete Guide, written by Joanne Schwartz is by far the best research book on the market. I belong to a group of collectors and this book was written by one of the members.  Additionally most of the photographs are of a member's extensive collection.  There are dozens of drool-worthy color pictures and the commentary guides the reader through charm collecting for over a hundred years.  The book also has history of manufacturers and examples of American vs European charms.

Washington - Nicknamed the Evergreen State after the abundant evergreen forests.

West Virginia - West Virginia is the Mountain State because of the Appalachian mountains that run through it.

Wisconsin - Called the Badger State after the official state animal.

Wyoming - The Equality State is where women were first allowed to vote, hold public office, and serve on juries.

What Do You Think Of My State Map Charm Collection?

I think that's lovely. Perhaps you could write an article on how the different states got their nicknames?

Want to make a personalized heirloom charm bracelet but not sure where to beg...

An American tradition for generations 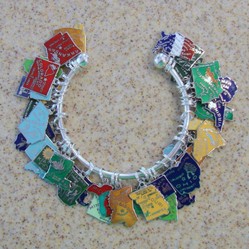 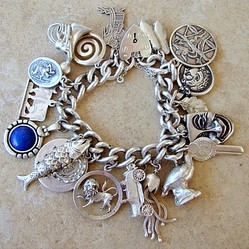 Want to make a personalized heirloom charm bracelet but not sure where to begin? Here are 5 steps to help you get started.
51%  2   6 fitzcharming
Christmas Traditions 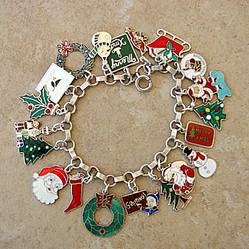