You will recognize this fortified Medieval manor house, in Derbyshire, England. It's been used as a film set for 'Jane Eyre', 'Pride and Prejudice' and others.

Haddon Hall is called 'one of England's oldest and most romantic houses'. That's why it caught the eye of so many movie directors.

Home to the Dukes of Rutland, and visited by many monarchs, work began on the manor house around 1150. It's been steadily growing over the centuries ever since. Medieval banqueting halls nestle alongside the Tudor kitchens, and the Elizabethan long gallery. This is not a ruin, but a functioning, magnificent stately home.

Postcard of Haddon Hall in Derbyshire

Haddon Hall: Home of the Dukes of Rutland

The fortified manor house was first constructed in the 12th century. Its present occupant is the great x 27th grandson of the man who built it. 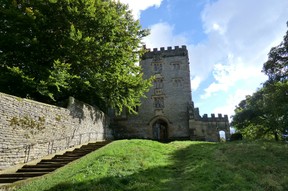 When Simon Jenkins wrote England's Thousand Best Houses, he described Haddon Hall as 'the most perfect English House to survive the Middle Ages.'  Sir Nikolaus Pevsner, an academic specializing in the history of architecture, called it 'the English castle par excellence.'

To my mind, neither of them came close to nailing what it's like to enter through that fortified gate. For anyone fond of history, it's like stepping into another world. Not half destroyed, like so many ancient buildings were during the English Civil War, but there; as solid and substantial as it must have been when Tudor royalty rode up those slopes and into that courtyard.

Yet it's far older than that. Even before Haddon Hall was built, people were leaving constructions in the grounds. The entrance hall holds a Roman altar, dedicated to the God Mars, which was dug up in fields belonging to the estate.

A charter from King John allowed the first curtain wall to be built in 1195.  The house itself was mentioned in a legal document from 1180.  Historians have dated part of the architecture to 1150, when it was the home of the conquering Norman noble William Avenel I.  He owed fealty to William Peverel I, who had taken the land from the Saxons.

It has been in continuous occupation from then to now. Haddon Hall now belongs to Lord Edward Manners, brother of the 11th Duke of Rutland and a direct descendent of William Avenel.  It's been in the same family for twenty-nine generations. Each of them building, improving, maintaining and extending that house and its gardens.

It's all quite something to see.

A Tour Through Haddon Hall

Stepping foot here is like walking through history. Its continual use as an aristocratic house means that much remains from the past. 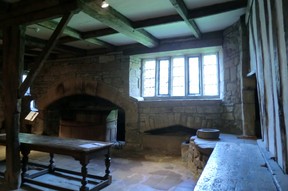 Around every corner was a revelation. Sweeping gardens; tiny rooms containing works of art; a large, paneled dining room; and that strange mixture of light, space and claustrophobic enclosure, which can only be found in an Elizabethan long gallery.

No less eye-opening was the chapel.  The Black Death, devastating this area in the 14th century, has cast its long, dark shadow here.  Crude frescos on the wall depict the Danse Macabre.

Light dances through the long, high windows, picking out the marble on a more modern tomb. There's an effigy there to the nine year old son of the 8th Duke of Rutland. It was carved by his heart-broken mother, when he died.

Through the chapel, as in so many other places within Haddon Hall, the stone floors were worn in shiny grooves, by the passage of so many feet over so many centuries.

I stared in wonder at the Medieval Great Hall, imagining the scenes which had played out there.  Prince Arthur, heir to the throne of Henry VI, must have sat at that fire; so too must have Prince Charles, current heir to the throne.  They've both been here.

Upstairs, in one of the many chambers, is a wall autographed by every member of the British royal family to step foot in Haddon Hall.  It's protected by perspex, but you can clearly trace each signature.

Yet most of my awe was reserved for those areas occupied by the less privileged individuals.  I'd never seen a more perfect, nor complete, Tudor kitchen. I wandered through its antechambers, storerooms, bakery and abattoir - the latter not great for a vegetarian, but fascinating for an historian.

Centuries of popular culture have buzzed around this stately home. It's left us all with a vague feeling that we know the place. 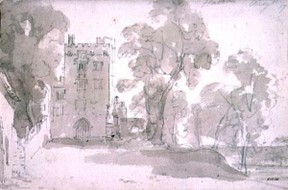 It is said that Jane Austen wrote part of Pride and Prejudice at Haddon Hall.  Sir Walter Scott also found inspiration in those turrets and battlements.

John Constable sketched the house and gardens several times, during a visit in August 1801. Pictured here is one inscribed August 17th.

There is a vague rumor, largely discredited, that Sir John Manners, the 5th Earl of Rutland, was actually William Shakespeare.  A nobleman couldn't be seen to be writing plays for the common people, so he took a pseudonym.  If so, then he wrote those timeless lines within the walls of Haddon Hall.

An operetta by Sir Arthur Sullivan (of Gilbert and Sullivan fame), a silent movie starring Mary Pickford, a novel by J.E.Muddock and much more all focus on a romantic legend from Haddon Hall.  When the Baron Vernon's daughter, Dorothy Vernon, eloped with John Manners, all of Elizabethan society was both scandalized and thrilled.  We're apparently still talking about it.

But when I visited Haddon Hall, the only popular culture that was diverting me came from a much more recent movie.  This was where much of the 2006 and 2010 versions of Jane Eyre were filmed.  Everywhere I looked, there was something familiar.

My companion really wished that she'd seen those particular movies too.  Mind you, she had her pick.  Dozens of movies, television programmes and documentaries have been filmed at Haddon Hall.  The BBC practically have permanent residency here. If its repeat visits are anything to go by, then Haddon Hall is viewed as a great British filming location.

Behind the scenes, filming the movie at Haddon Hall. You get to see many of the rooms that so delighted me on my visit too.

Every movie listed below was filmed wholly or in part at the manor house. You can visit and walk through those same rooms and gardens.

Movie Review of Jane Eyre (2006)
Charlotte Brontë's classic tale is about an orphan girl finding true love, without losing herself in the process. Ruth Wilson and Toby Stephens star in this excellent adaptation.

Haddon Hall is open most days of the year, excepting Christmas Day and whenever some film company has invaded it.  It is best to check their website, if you are planning a visit.  Not least for the opening dates and times, but also to find out when their special events are being held.

It's good to walk through the house and gardens anyway, but if you could time it for when re-enactors are around, then that would make it all even better.

Unlike many properties of its age and vintage, Haddon Hall is not a part of the National Trust.  Unfortunately for me, that means that members cannot get in free accordingly!

I can attest to that. I had a gorgeous vegetarian meal in there.

yes it is wroth a visit, very beautiful. The food in the cafe is pretty fab too!

Unfortunately this one wasn't National Trust. I actually had to pay to get in! But yeah, Haddon Hall is worth the visit.

I love Stately Homes, but Haddon Hall I have yet to visit. I see the much envied National Trust membership is being used. :)

You're very welcome. Thank you for reading it.

JoHarrington, your article is great! Has plentiful of useful information and it is also well written. I enjoyed it! Thanks you!

I really enjoyed visiting it; and my pictures don't do it justice. :)

The pictures kind of look like they might even be from a film set xD This place seems really interesting from looking at them! :)

Decorated throughout by William Morris and filled with pre-Raphaelite paintin... 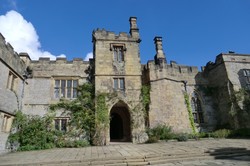 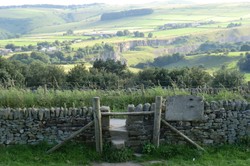 Beautiful views over the Derbyshire Dales and 17th century buildings greet visitors to Eyam. It's a little village with an awe-inspiring historical tale to tell.
94%  15   8 JoHarrington
United Kingdom of Great Britain and Northern Ireland 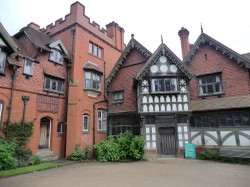 Decorated throughout by William Morris and filled with pre-Raphaelite paintings, this manor house near Wolverhampton is worth a visit.
Loading ...
Error!