Right now, who do YOU think is the best tennis player? Is it Novak Djokovic, Rafael Nadal, Roger Federer, or is it someone else?

At the age of eight, he won his first junior tournament; at 12, he became Spanish and European champion

Only 15 and ranked 762, the “Mozart of the racquet” gained victory in his first ATP tour match by outplaying world Number 81 Uruguayan Ramon Delgado 6-4, 6-4.

As the all time youngest Davis Cup player (17), he crushed Andy Roddick, graded second in the world.

Then, the momentous year of his breakthrough - 2005 - flagged 24 consecutive winnings of singles matches, and escalated him to world Number 5.

At his 19th birthday, he mounted to number 3 after playing his first French Open (Roland Garos). Not only he left Paris triumphantly – he crowned his début with four sequential French Open championships until 2008. He culminated the year as Number 2.

He became the first to sweep Roger Federer in a Grand Slam final. Since 1994-1995 Agassi’s record, he was the first to finish two succeeding years as world Number 2.

Recognized as "The King of Clay", he played resounding exhibition match the "Battle of Surfaces" on the half grass - half clay tennis court, and checkmated his adversary, Federer.

After the all-time longest lasting Wimbledon final, he checkmated Federer again in 2008.

In addition, he was only 22 years, two months, and two weeks old when we pocketed the Olympic gold medal on hard surface in Beijing, China, by outdoing Fernando Gonzales.

Furthermore, after 160 weeks as a Number 2, Rafael Nadal Parera ultimately reached the zenith as the world Number 1.

Because he suffered terribly from tendinits in his knees, he could not defend his title at the 2009 Wimbledon Championship. After Federer’s success, he dropped back to world Number 2. Moreover, in Montreal he was forced to yield the ranking to Andy Murray. Before the end of 2009, he regained the second position back for the fourth time in five years.

As the winner of the Monte-Carlo Rolex Masters in Monaco (2010), he laid down the record of first player that won a tournament title for six back-to-back years.

By overpowering Soldering at the French Open, Nadal conquered the world Number 1 again.

After series of winnings, he lost the Wimbledon 2011 final against world Number 2 Djokovic.

He slipped to Number 2 and gave up the throne to Djokovic. At the 2011 US Open, he lost the finals against Djokovic one more time.

Still ranked world Number 2, he lost the Australian Open 2012 against Novak Djokovic, in a grandiose final, which turned into the all-time longest match for a Grand Slam title by going on as much as dramatic five hours and 53 minutes.

In April 2012, he won the Monte-Carlo rolex Masters in Monacto, beating Novak Djokovic.

Born on June 3, 1986, in Spain, he is a perfect role model for young athletes. Formally, he is not much educated, yet he is gracious, mannerly, courteous, and generally tremendously well raised.

Unlike many of his fellow tennis players, he never broke the racket in the disappointment or fury. His uncle and coach Toni taught him well to treat the equipment with due respect.

His modesty and generosity are striking. Despite his exorbitant earnings, he lives a humble life in his hometown Manacor with his family.

Moreover, he established the Rafa Nadal Foundation, (a non-profit children and young adults charity) to help deprived, handicapped and socially excluded, which bonded up with the Vicente Ferrer Foundation to open the school and tennis center in India. He also supports the charity Fundacion Iberostar.

He carries five different nicknames: "The King of Clay, "the Bull", "Rafa" "Superman" and "Gladiator".

In his local soccer league, he scored 100 goals. He quit because his coach kept leaving him on the bench if he came on the field after his tennis training.

According to gossip, the remarkable sportsman sleeps with the television and all the lights on when home alone.

Although Nadal is naturally right-handed, he is famous to play tennis with his left hand. Everything else he does with his right hand.

His statement about losing and winning: “You learn that losing is part of this game. But winning-ah, winning is so much nicer".

Who do YOU think is the best?

A kid who started at the tender age of four, was professionally launched at 16 at the quarterfinals of 2006 French Open. From precursory  40, he moved straight to  20.

Nevertheless, he mounted to the world's top ten. Later on, at the Masters Series Rogers Cup inMontreal, he crushed Andy Roddick (Number 3) in the quarterfinals, Rafael Nadal (Number 2) in the semifinals, and world Number one Federer in the final.

At the 2008 Australian Open, Djokovic finally conquered his first grand slam singles title as the all-times youngest player – without dropping a single set.

Next, his first Olympics in Beijing, China, brought him the bronze medal after he lost to Nadal, but trashed out James Blake. Before the end of the year, he won his first Tennis Masters Cup title in Shanghai.

By defeating David Ferrer, he captured his 12th career title at the 2009 Barclays Dubai Tennis Championships. At his hometown tournament, the Serbia Open, he attained his second title of the year by beating Łukasz Kubot.

In the semifinals at the Western & Southern Financial Group Masters in Cincinnati, he defeated world Number 3 Nadal, but lost in the final to Number 1 Federer.

Aside from accumulating his third title of the year at the China Open in Beijing, he beat the three-time defending champion Roger Federer at the Davidoff Swiss Indoors in Basel. Then, he checkmated Rafael Nadal in the semifinals  at the BNP Paribas Masters in Paris and triumphed the final to Gaël Monfils.

The 2010 brought Djokovic a world Number 2 ranking. His major achievement of this year was the victory over Roger Federer at the semifinals of US Open, though he lost out the final to Rafael Nadal afterwards.

All things considered, 2011 was even better year for Novak Djokovic.

He serialized seven other victorious tournaments along with most important Grand Slam tournaments at the Australian Open, Wimbledon and the US Open.

Despite poor performance at the ATP World Tour Finals, caused by back injury, he ended up the season as the world Number 1.

As a result, he was  showered with numerous accolades.

Nadal, who was outdone by Djokovic on three different surfaces in as much as six finals, recounted his art of performing as “probably the highest level of tennis that I ever saw".

Pete Sampras (Novak’s infancy idol) declared his 2011 season as “the best I ever saw in my lifetime”, and the legendary Boris Becker "one of the very best years in tennis of all time".

Although, added Becker, Djokovic's season may not be the best in terms of statistics, “but he has beaten Federer, he has beaten Nadal, he has beaten everybody that came around to challenge him in the biggest tournaments in the world".

However, Djokovic indubitable passed into legend at the very beginning of 2012, if not before.

He defeated Nadal in the longest final in Open era Grand Slam history, which lasted five hours and 53 minutes.

They broke the record of the Australian Open longest match – the 2009 semifinal between Fernando Verdasco and Rafael Nadal.

Personality: Born on May 22, 1987, in Serbia, he is known to be tremendously curious, intellectually constantly hungry, and mentally ceaselessly in motion. Also, with his frivolous, sharp, and brisk mind, he seems to be an eternal child in many ways.

As a rule, tremendously extroverted Novak Djokovic is a jester, popular among his colleagues (off the court, naturally) and friends. More than once, he delighted audience with hilarious impersonations of Nadal, Ana Sharapova, and even mythical John McEnroe.

He donates generously to several charity organizations. Hence, he also founded the Novak Humanitarian Fund in 2007. Moreover, that same year he and his family asked over and hosted a group of deprived Kosovo-Serb children at the Serbia-Australia Davis Cup in Belgrade.

He is nicknamed “Nole” and “The Joker”.

Serbian blues-rock band Zona B recorded and dedicated their song “The Joker” to Novak Djokovic.

Nole is a great poodle lover – he is taking his four-legged furry friend Pierre everywhere with him.

He adores classical music. As he says, “It relaxes you and takes you to another world.”

His forehand and aggressive style of play

Roger Federer's amazing accomplishments are of the highest order.

He broke the former men's record ever by winning 16 Grand Slam titles in a span of 27 majors, and as the first who won more than 14 Grand Slams.

Besides Björn Borg, Roger Federer is the only one who triumphed five consecutive men's titles at Wimbledon in Open era (2003 – 2007).

In the Open era, nobody broke his record of five sequential US Open titles (2004–08).

He is the only one in the world who conquered three  Grand Slam titles in a row twice and three different Grand Slam tournaments four times each.

After Borg and Sampras, he is the third who earned the same Grand Slam six times.

In tennis history, he is the only one who won six Grand Slam titles in two years, eight in three years, 11 in four years, 12 in five years, 14 in six years, 15 in seven years, and 16 in eight years. Sixteen Grand Slams in eight year is an all-time men's record.

In Grand Slam finals, he faced 12 different opponents and dominated 11 - all but Del Potro (US Open 2009 final).

In 2009, he and Nadal were the only players who simultaneously hold Grand Slam titles on hard, grass, and clay courts.

In terms of games, he overcame the longest Grand Slam final at 2009 Wimbledon (77 games).

Since the 2011 French Open, he holds the all-time men's record of playing 23 Grand Slam finals.

He is the only player in tennis history who played in seven successive Wimbledon finals.

In his career, he got the better of 70 championships.

Along with Novak Djokovic, Federer is the only player who defeated Rafael Nadal in a Grand Slam final.

Born August 8, 1981, in Switzerland, Roger Federer is highly esteemed as humble, unpretentious, and often the one who prefers staying in the shadow. All but arrogant, he is modestly assessing himself excessively self-critical. No matter how well is he doing, he seeks the perfection in anything he does. Thus, he personifies proverbial, illustrious Swiss punctuality, pronounced organization, and sacrosanct order.

Not only he is a UNICEF Goodwill Ambassador, but he also aids the children, education, health, and sports causes, along with Humpty Dumpty and Roger Federer Foundation.

It is utmost difficult to satisfy his ultimate food, clothing, and any other preferences.

During the opening ceremonies for the Summer Olympic Games inAthens(2004), he carried the Swiss flag.

He is great connoisseur and fan of American professional wrestling.

He is having his own cosmetic brand in exquisite fragrances line that is on sale exclusively in few European countries.

He carries the Tweety bird with him on every tour as his lucky charm.

Playing tennis on PlayStation is his favorite hobby – with Nadal as his opponent, of course.

A brief overview of the 2012 Olympic tennis event, the court equipment regula... 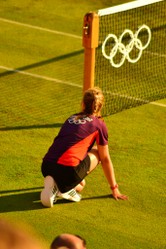 A brief overview of the 2012 Olympic tennis event, the court equipment regulations and highlights.
100%  6   10 KathleenDuffy
Football