Feeling a little Welsh today? Check out these ideas for outfits which invoke the national pride of Wales.

The National Dress of Wales has only been around for just under two centuries, but it was based on what Welsh ladies were wearing at the time.

You can still catch Welsh women and girls wearing it today. But only where there are tourists around, or there is a parade. Nevertheless, it is instantly recognized all over the country.

So for a bit of Cymric charm, don a Welsh traditional dress today!

This all in one dress will save you having to dress your little one in layers. It simply fastens with a hook and loops at the back.

It's 100% polyester, with elasticated sleeves and a rounded collar. It will be perfect for St David's Day, as well as general dress up play.

The red shoulder wrap is a separate piece. Dyed pillar box red, with a black trim, it is held in place with a daffodil bow. The daffodil is, of course, the national flower of Wales.

Your active girl will find the flat bonnet more practical than the adult tall hat. The lace trim makes it look uniquely Welsh.

The Welsh Girl Costume is available from Asda.com.

Celtic, sexy and a lot of fun! Buy this playful adult outfit via eBay merchants.

This is an adult fancy dress version of the traditional Welsh costume.

It might look like a blouse, skirt and apron, but it's actually all in one. It's available in sizes 8 to 18.

The shawl does come separately though and it is pinned together with a daffodil finish.

Please note that the hats, socks and shoes are considered accessories and therefore have to be purchased individually.

The Welsh Traditional Lady Costume is available from ebay.co.uk, with a buy it now price of around £21-£23.

How Lady Augusta Hall Created a Traditional Dress for Wales

Originally meant to be worn by her lady friends and their servants, this costume came to symbolize a nation. 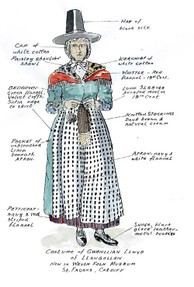 In the 19th century, a group of genteel ladies set about collecting aspects of Welsh culture and embedding them as national symbols.

Amongst them was Lady Augusta Hall, aka Baroness Llandover, who wanted to create a traditional outfit for Welsh state occasions. She took her lead from the popularity of kilts and plaid in Scotland, but she found her inspiration in the ordinary women around her.

The national dress of Wales might look quaintly colorful now, but in the early 19th century, it was commonplace.

After the Cardiff Eisteddfod of 1834, Lady Hall commissioned artists to travel across Wales creating watercolors of the fashions of the time. They focused on the lower class women. After receiving thirteen of these portraits, she designed an outfit, which she considered represented them all.

This is still the basis for Welsh traditional costume today. It is still occasionally seen out in the wild, but usually only on ladies in the tourism industry.

Lady Augusta Hall might have designed the Welsh national dress, but her husband is famously linked with another British institution. Big Ben, the large bell in St Stephen's Tower, London, is named after Sir Benjamin Hall. He oversaw its construction in 1855.

Get your bids in for these clothing, shoes and accessories listings.

Did the Fishguard Ladies See off the French in a Failed Invasion of Britain?

The national dress of Wales might have played a pivotal role in history; if the stories are to be believed. 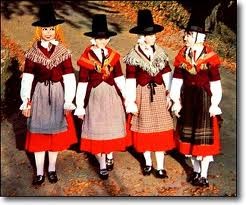 I was once in Fishguard, on the west coast of Wales, reading a pub wall - as you do, while waiting for your pint. Framed on a pillar was a faded yellow parchment, telling the story of how traditional Welsh costume thwarted the last invasion of Britain.

Apparently (and the regulars around me were adamant that it happened), on February 22nd 1797, a fleet of French ships arrived on the orders of Napoleon Bonaparte.

Their mission was to storm Britain through Cardigan Bay, raising the Welsh in rebellion against the English along the way. It was all to be part of the French Empire.

As soon as they were sighted, a cannon fired from Fishguard. Out at sea, the erstwhile invaders assumed it was pre-emptive aggression from British troops. They must have been tipped off that the French were coming. 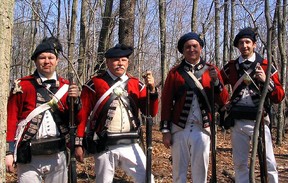 Within minutes the whole land horizon was filled with the distinctive Redcoats with their black helmets. Or so the French sailors thought.

Their commander, Colonel Tate, later reported that there were thousands of them, so he ordered the retreat.

But the reality was that there were no British soldiers in the area. The cannon had been a warning from a look-out, raising the alarm for the townspeople. The witnesses were the Welsh women, resplendent in their national dress, come to see what was going on.

I guess that, from a distance, the colors did look very similar between them and the uniform of the British army. Either way, that was the end of the invasion; a surrender with no shots fired!  Go the Welsh women of Fishguard!

Celebrating St David's Day in Cardiff 2012
On March 1st 2012, I visited the capital of Wales for the city-wide party that is St David's Day. It didn't disappoint.

Welsh Love Spoons: A Thoroughly Celtic Way to Say I Love You
For centuries, Welsh women have got the message when presented with a hand-carved wooden spoon. It means he's very interested indeed.

Wales and the Welsh National Anthem
The story behind 'Land of my Fathers' ('Mae Hen Wlad fy Nhadau') is one of poetry, bardic awen and the refusal to lay down and play dead.

Celebrating St David's Day the Welsh Way
Grab a daffodil or a leek and boil up some cawl! March 1st is St David's Day and all of Wales will be partying.
Updated: 03/06/2015, JoHarrington
Thank you! Would you like to post a comment now?
6

I'm off to Cardiff today. I'll get you another one. :D

My Adult fancy dress all in one st David's day costume is in the wash!

Diolch! And the same to you too. :D

For centuries, Welsh women have got the message when presented with a hand-ca... 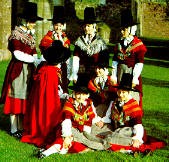 Grab a daffodil or a leek and boil up some cawl! March 1st is St David's Day and all of Wales will be partying.
100%  43   26 JoHarrington
Pagan Ceremonies

For centuries, Welsh women have got the message when presented with a hand-carved wooden spoon. It means he's very interested indeed.
Loading ...
Error!