What Is A Computer Virus

A virus is a parasitic program that infects another legitimate program, which is sometimes called the host. It modifies the host and saves a copy of itself on the host computer. Computer viruses are programmed to do harm once they infect the victim’s system. They are designed to do various kinds of damage. But the ability to do damage is not what defines a virus. According to Wikipedia, “A computer virus is a computer program that can copy itself and infect a computer”. So to qualify as a virus, a program must be able to replicate itself. This can mean copying itself to different places on the same computer or looking for ways to reach other computers, such as by infecting disks or traveling across networks. Viruses can be programmed to replicate and travel in many ways.

Some Common Ways To Pick Up A Virus

What Can A Virus Do?

The majority of computer viruses are relatively harmless; their purpose is to annoy their victims rather than to cause specific damage. Such viruses are described as benign. Other viruses are indeed malicious, and they can do great damage to a computer system if permitted to run. Viruses can be programmed to do many kind of harm, including the following:

This list is by no means comprehensive. Virus programmers can be extremely creative, and many create viruses to perform a specific type of task, sometimes with a specific victim in mind. Regardless you need to protect your system against all kinds of viruses, because nearly anyone can strike at any time, given the right circumstances. Depending on your source of information, different types of viruses may be described in slightly different ways. Some specific categories of viruses include the following:

This type of virus can infect both files and the boot sector of a disk.

The two most prevalent types of bombs are time bombs and logic bombs. A time bomb hides on the victim’s disk and waits until a specified date before running. A logic bomb may be activated by a date, a change to a file, or a particular action taken by a user or a program.

Regarded as one of the most hostile types of virus, a boot sector virus infects the boot sector of a hard disk. This area of the disk stores essential files the computer accesses during start-up.

This type of virus makes changes to a disk’s file system. If any program is run from the infected disk, the program causes the virus to run as well. This technique creates the illusion that the virus has infected every program on the disk.

This type of virus infects program files on a disk. When an infected program is launched, the virus’s code is also executed.

Joke programs are not viruses and do not inflict any damage. Their purpose is to frighten their victims into thinking that a virus has infected and damaged their system.

A macro virus is designed to infect a specific type of document file, such as Microsoft word or Excel files. These documents can include macros, which are small programs that execute commands. A macro virus disguised as a macro, is embedded in a document file and can do various levels of damage to data, from corrupting documents to deleting data.

This type of virus can change itself each time it is copied, making it difficult to isolate.

These viruses take up residence in the computer’s memory, making them hard to detect. They also can conceal changes they make to other files, hiding the damage from the user and the operating system.

A trojan horse is a malicious program that appears to be friendly. For example, Trojan Horses appear to be games. Trojan Horses are not technically viruses as they do not duplicate themselves, but because they can do harm, many experts consider them to be a type of virus.

A worm is a program whose purpose is to duplicate itself. An effective worm will fill entire disks with copies of itself and will take up as much space as possible in the host system’s memory. Safeguarding a system against viruses is not difficult if you have a little knowledge and some utility software. Start by being aware that viruses can come from many sources-even sources you trust. For example, an e-mail virus may arrive in your inbox disguised as a message from a friend or colleague because it has already infected that person’s computer. A homemade data CD can be infected too. the best precaution is to treat all e-mail messages and disks as potential carriers of infection. Checking for viruses requires antivirus software, which scans your computer’s memory and disks for known viruses and eradicates them. After it is installed on your system and activated, a good antivirus program checks for infected files automatically every time you insert any kind of disk or download a file via a network or internet connection. Sophisticated virus scanners can also alert you if a web page attempts to load suspicious code onto your PC. Some popular antivirus programs:

However, simply having antivirus software on your computer is not enough to keep viruses away. This is where casual computer users slip up and allow their systems to be infected.

It’s also a good idea to stay upto date on the latest news about viruses. A good way is to visit the website of your antivirus software program’s developer. A few other sources of general virus-related information are

It helps knowing what you're up against. It can be confusing, thanks for the clarity on computer viruses. Katie 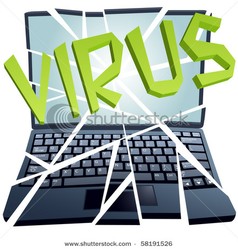