Psy performed Gangnam Style on New Year’s Eve in Times Square. The original video is the first to reach and exceed 1 billion views on YouTube. It’s the top meme of the New Year.

As 2012 turned into 2013, many people performed Gangnam Style in karaoke bars. It was the top choice on the online karaoke service Lucky Voice.

Just what is Gangnam Style? Well, for one it’s a kind of horsey dance / horse-riding dance that we see Korean singer Psy perform in that afore-mentioned YouTube video that now has over 1,100,000,000 hits. The video alone has gotten him over $1.1 million in ad revenue.

Despite the fact that the song is sung in Korean, it’s become a huge success. The only words in English are “Style” and “Sexy Lady.” “Gangnam Style” is actually a Korean neologism that means something like “swag.”

What is Gangnam then? It’s actually an affluent neighbourhood in Seoul. In his record-setting video (it’s now in the Guinness Book of World Records as the most liked YouTube video in history), K-pop (Korean pop) rapper Psy (as Park Jae-Sang is now known all over the world) mocks the lifestyle of Gangnam District, sporting a bow tie and engaging in the leisure activities -- and other, more mundane ones – of the well-to-do.

There are sexy ladies, expensive cars, bow ties, and two pairs of sunglasses that have Google abuzz as people search for Gangnam Style Psy sunglasses and various companies try to replicate their designs. For a while in August, when the video went viral, the answer wasn’t available in English, until a blogger who could read Korean searched Korean Web pages and found the answer. The designer was Thierry Lasry. They now advertise that on their Web site, of course, but in the meantime many eyewear producers have jumped on the bandwagon, so you can find them for as little as $10 on the first page of search results for “psy sunglasses” and even $5 if you search some more. Compare that to $435 for the original Thierry Lasry “Variety” sunglasses sold in the US (according to examiner.com, December 22, 2012).

Psy’s horse dance has become quite a meme. And like a true meme of the 2012, it has already appeared on posters of the “Keep Calm” variety, with a Psy-like figure horse-dancing at the top, where the crown stood in the original posters. Apart from those dance moves, the music inspired many versions of “Gangnam Styles,” including some operatic ones, complete with flutes and other instruments, and where the performer actually horse-dances in front of his music stand. There are many videos on YouTube with such versions, and they include parodies where politicians are made to move like Psy in cartoon-like animations. There are also instances where politicians themselves, such as Andrew Little, Member of Parliament in New Zealand, demonstrate the Gangnam Style moves! In Parliament! And many more politicians and public figures mention Gangnam Style without attempting the dance.

So what is Psy singing about? Well, like most singers, he sings about sex. He presents himself as a hot-blooded player who downs his coffee hot in one gulp and likes ladies who know how to let their hair down and play. There’s more to the lyrics, but not much.

Psy says that the night of December 31, when he turned 35 and sang and danced on “the biggest stage in the universe,” New York’s Times Square, was his last performance of Gangnam Style.

NB: The T-Shirts Shown Are Unavailable

Update February 21, 2021. The T-shirts shown below are not available on Amazon anymore. I'm leaving them here because the URL to the page includes mention of T-shirts. (And I'm not taking the page down because I think I provided a good explanation for the song, which was a phenomenon at the time.)

Xi sells on Amazon Keep Calm and Gangnam Style tees, complete with an image of a chubby guy dancing Gangnam Style. The T-shirts come in red, white, light blue, pistachio, light pink, yellow haze, heliconia, and sport gray. There is a T-shirt for everyone. I love the color selection.

There are other tees like these on Amazon, in an even broader range of colors, but the guy at the top is not quite what seems to be the original design for the dancing figure. The T-shirt to the right seems to be the real deal.

Other Gangnam Style T-Shirts with the Iconic Drawing for Psy

I recently saw some people dancing to it somewhere (on TV). It's the kind of dance, like macarena, that will probably get to be a mainstay at parties.

Mira, Very nice! That's quite a workout, and it's clear that a lot of prep and rehearsal work went into the production. Go figure: the most impressive scene for me was him flanked by two women being pelted by confetti or snow and such wind-blown litter as a piece of paper sticking to one of his thighs.

Whoever wrote the song did a very good job. Couple that with the dance and Psy, who can do both with panache, and you have a huge success.

Surprisingly for me I thought this Gangnam Style song and video did have something going for it. I can see why it was such a sensation. And yes, the Keep Calm T-shirts are always fun :) Thanks, Karen, for visiting!

I love the "Keep Calm and Gangnam Style" t-shirt :-)

Now Psy can afford to live in Gangnam. Thanks for the explanation. 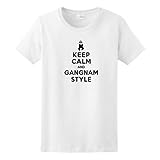 Make a statement with inspirational jewelry with quotes, or gift it to someone dear or who needs encouragement in difficult times.
65%  7   6 AnomalousArtist
Pop