What It Means to Promote the General Welfare

Mentioned explicitly in the Preamble to the Constitution, "Welfare" is defined as health, happiness, prosperity or well-being & liberty. A common good of the people, by the people.

The ultimate goal then of our system is to encourage both government and the people to "promote the general welfare"--namely, to work together for the common good. Making provision for a common defense, but not at the expense of the cause of liberty. A cause which has fallen to decay along with the general well being of the people in the name of domestic tranquility.

A Path to Prosperity 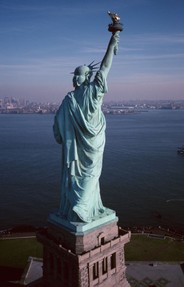 In the greatest sign of pride and reverence the world once showed America, there is this inscription.

"... Give me your tired, your poor,
Your huddled masses yearning to breathe free,
The wretched refuse of your teeming shore.
Send these, the homeless, tempest-tost to me,
I lift my lamp beside the golden door!"

A land offering the promise of freedom and opportunity, Hope and Solace... for those who indeed are downtrodden it extends a lifeline saying, "all is not lost, WE - are there to help you. WE - will not turn you away.

Yet now it seems that things are fast changing. People are convinced or are being convinced that somehow a land built both on opportunity and sacrifice - with a willingness to extend a helping hand to all who need it... Is now incapable of being so, is incapable of doing so, is unable to or unwilling to  even aid its own citizens in their time of greatest needs. A nation which prided itself on giving, some say is now so broken. Broke and unable to even afford its basic commitments, at a time when its people are most in distress, some would say, "Let them Die". Let every castaway fall and then America can rise again... neglecting the most important fact in the founding and History of America.

The POOR and HUDDLED Masses,

Those hungry for opportunity when food itself was scarce gave their life to build this country. To make this country what so many envy and aspired to - this country was built with a social contract. Built by a social network which said,

WE the PEOPLE of the UNITED STATES, in order to form a more perfect union, establish justice, insure domestic tranquility, provide for the common defense, promote the general welfare, and secure the blessings of liberty to ourselves and our posterity, do ordain and establish...

This is not a land of every man for himself.

In order for the land to prosper, in order for America to gain. WE have to pull together. WE have to lend a hand. WE have an obligation to our citizens that says, whats best for us - is what's best for you... as long as you are able to pull.

A General Welfare clause is a section that appeared in many constitutions, as well as in some charters and statutes, which provides that the governing body empowered by the document may enact laws to promote the general welfare of the people. In some countries, this has been used as a basis for legislation promoting the health, safety, morals, and well-being of the people governed thereunder. Such clauses are generally interpreted as granting the state broad power to legislate or regul... 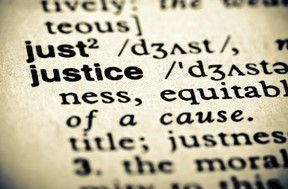 And then, even if your are unable to pull, to keep in stride with the rest of us - as long as you can push, WE will be there for you. We will not let you fall and stumble without a hand to say steady yourself brother(or sister) we won't throw you away.

We don't discard our citizens - judging them unable to contribute, WE find a way for them to contribute. WE, if necessary take our brother by the hand - to the food bank; to the shelter; and say eat and rest up brother there's work ahead. Our Roads, Our Bridges, Our Nation is crumbling in desperate need and all some will say is how are we going to pay for it.

It's time for the "shining city on a hill" to once again casts its glare into the midst and say...

Liberty and Justice for ALL  - socioeconomics be damned.

If perception is 99 percent of truth, then the image I have pictured is more of a problem than most including myself could have imagined. It represents the view of one side of the social argument in America. To Quote Newt Gingrich,

"More people have been put on food stamps by Barack Obama than any other president in American History." An interesting assertion except, according to other sources,

"More people were added (to the food stamp program) under Bush than under Obama, according to the most recent figures. Factcheck.org

Now which side is most accurate or a hundred percent purely unbiased and truthful, I can't say. Partly because I don't know and partly because it only further confounds the issue(s). Namely, are food stamps [Social Programs] necessary -read it acceptable and why are so many now in need of food stamps and other social programs.

And further why is there now such a stigma attached to the words Social Safety Services / Program? Have we gotten that far from history - from the very fabric that held this country together. The same fabric our politicians trot out when campaign plotting; 9-11 - war on terror - budget deficit- economic depression. The same familiar themes over and over when in need of a vote, yet no one actually trying to find a solution the people can accept. In fact with less concern for the people and more concern with their own views of "public" policy, their own view of promoting the general welfare.

Decrying and proclaiming austerity, and yet not everybody is going without food or shelter or basic healthcare. The very minimum of social services inherent in the constitution. WE the PEOPLE... PROVIDE...

That's not a conservative estimate or a liberal indulgence, that is a part of the social fabric which founded and built this country.  the fabric which WE promised to provide to all who come here and all who live here. We can analyze the numbers and judge what we can or cannot afford mathematically; but the reality of what both sides should know is Social Programs work.

And the safety net they provide is earmarked - set aside - by the constitution. There is no way we can not provide for it.  So somebody needs to get their hands on a calculator and find a way to make it work. Find the happy balance in the voice of the people, and end the dividing rhetoric.

Welfare refers to a broad discourse which may hold certain implications regarding the provision of a minimal level of wellbeing and social support for all citizens. In most developed countries, welfare is largely provided by the government, in addition to charities, informal social groups, religious groups, and inter-governmental organizations. In the end, this term replaces "charity" as it was known for thousands of years, being the voluntary act of providing for those who temporari...

The Country's Well Being

A Simple Fact of Numbers

In the end, the well being of America going forward is hanging unbalanced not only because the people or their government elect, but because there is little financial incentive to actually fix our budget ailments.
As said earlier we have become a nation of I've got - now you get yours. Tearing the threads of the Social Fabric which has held this nation together for generations. Whether it be the bankers fault; or government or the electorate flat out not giving a shit anymore. We have a mission, a moral imperative to make this country great again. that can only happen to gether.
I don't disagree about America's financial state. I simply state we have a foundation in place that despite the calls to abandon it -works and if we are to return to the promise of excellence, We must do it together.
Ad AllPosters

A Community in Search of...

Social justice generally refers to the idea of creating a society or institution that is based on the principles of equality and solidarity, that understands and values human rights, and that recognizes the dignity of every human being. Social justice is based on the concepts of human rights and equality and involves a greater degree of economic egalitarianism through progressive taxation, income redistribution, or even property redistribution. These policies aim to achieve what de...

Social Spending at a Glance

The Right's View of Finance

Do You Believe America has or should have a Social Contract with it's Citizens?

WE already are Sharing The Costs

In this dated photo two things should stand out that reinforce the social aspect of our country.

and I'll even add one more fact...
the sign is signatured - Chamber of Commerce.
We the people
We the government
We the business alliance
TOGETHER
Share the costs

Welfare Drug Testing is being pursued around the country - What do you say?

Should welfare drug testing be mandatory to receive public assistance?

Absolutely... We're not here to supply your addiction

if you're drug free there's nothing to worry about

What we like to think of as social justice, or plainly fairness doesn't seem a likely biblical concept except when we look at the state of man in God's eye.

Many would say there is no need for social programs; however these same people might consider an interesting parable which was used to instruct the naysayers of Jesus' time. (Luke 10:29-37)

I'll leave the research for now to simply paraphrase the thought; There are many who can see a brother in need but how many are willing to go out their way to help?

Not only help but actually foot the bill.

with this let's also reexamine our founding(Americans) documents:

We the People... Provide for the COMMON DEFENSE.... Promote the GENERAL WELFARE...

If you fear America is becoming like Europe, fear not -- because it's too late.

In Hamlet, Polonius, the Chamberlain to the King, gives his son what is probably the most famous piece of fatherly counsel in all of literature: "This above all: to thine own self be true." 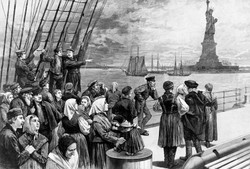