WHAT’S IN A NAME? THE ORIGIN OF STREET NAMES IN THE CITY - PART ONE

Have you ever wondered how different places get their names? The City of London is awash with unusual street names, from Swan Alley to Throgmorton Street to St Mary Axe. We don’t

I’ve always been fascinated by how places got their names. Having lived in the City of London once, for six months, I got to see lots of the little streets and alleys and was fascinated by some of the odd little names and wondered how they originated. Some of them are quite easy to work out – Bishopsgate, Newgate, for example, but others are a little less clear. And some don’t have the origins you might think. Cannon Street for example.... Nothing to do with the army....

The origin of place names has always fascinated me.  And the names of the streets in the Square Mile are no exception.  Some of them – Queen Victoria Street, for example, are not so difficult to work out or guess at – but others such as Throgmorton Street...  Where did that name come from?  Take a look at the first part of the alphabetical list of some of the streets in the City and their origins.

Aldermanbury is named simply because it is near the bury or court used by Aldermen of the City of London.

Ave Maria Lane runs between Amen Corner and Ludgate Hill.  Its name derives from the fact that, on the feast day of Corpus Christi, monks would walk in a procession to St Paul’s Cathedral from Paternoster Row.  As they walked, they would chant the Lord’s Prayer, and would reach the final Amen at Ave Maria Lane.  When they got here, they would start to chant Ave Maria.

Basinghall Street, in the ward of Bassishaw, are both named after the Bassing family.  They built a mansion here in the 13th century.

Beech Street, in the Barbican, is believed to be named after Nicolas de la Beech, who was lieutenant of the Tower of London back in Edward III’s reign.

Cannon Street.  My vision of a road full of huge Cannon is, in fact a fantasy.  The word Cannon, in this context, is a corruption of Candlewick or Canwick Street.  Apparently, the name is first shown as “Candelwrichstrete.”  This was a street full of candle makers, as well as weavers of woollen cloth.  Nowadays, it is famous for a mainline station, serving South East London and Kent.  This is also the site of the London Stone.  This is a large block of oolitic limestone that has been there since at least 1100 AD; its original purpose is not known. 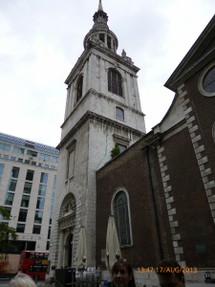 Cheapside.  Cheap was originally “Chepe” which meant market.  The market was originally called Westcheap – there is also a street called Eastcheap elsewhere in the City.  Cheapside runs from St Martin’s Le Grand to Poultry.  The famous church of St Mary-le-Bow is found in Cheapside.  This is the church with the Bow Bells of Cockney fame – if you were born within the sound of Bow Bells, you were a Cockney.  (Many people, even East-Londoners, get confused and think the Bow Bells referred to are those at Bow Church in Bow, E3, but not so.)

Devonshire Court, Street, etc.   These streets get their name from the Earls of Devonshire, the Cavensihes and are just off Bishopsgate.  The Devonshires' had a mansion in Devonshire Square which was previously owned by the Earl of Oxford.  It was in Devonshire Square that William Dockwra and his business partner, Robert Murray, set up the London Penny Post in 1680 – this was a postal service aimed at delivering post within London and the immediate surroundings for a penny.

Dowgate Street was a Saxon Port.  The surrounding area, is the ward of Dowgate, and is home to a number of the Livery Companies.  These were the trade organisation of their day, and most are known as, “The Worshipful Company of....”  There were twelve great livery companies.  The Skinner’s Company hall is in Dowgate Hill – Skinners were furriers.  Fur such as sable and ermine were used by royalty and the aristocracy in medieval times.

Falcon Court, Fleet Street.  This court gets its name from the Inn located there, the Falcon.

Featherstone Street.  This is at the City Road end of the City.  The exact history of the name isn’t known for sure, but is probably so-called after a family of the same name.  It was the site of a bookshop by James Lackington, who became famous for refusing to allow credit and thus being able to sell books at reduced prices.  An early day Amazon!

Garlick Hill gets its name from a garlic market that was held nearby.

Giltspur Street.  As far as we can tell, this was originally called Gilt Spurre or Knightriders’ Street.  So called because the knights, participating in tournaments, wore Gilt Spurts, and who rode along this street on their way to these tournaments.  Between 1791 and 1853, a small debtors' prison called the Giltspur Street Compter stood here.  There is also a monument to Charles Lamb, the English essayist.

Hanging Sword Alley is in Whitefriars Street.  It features in Charles Dickens’ A Tale of Two Cities, as being the home of the lodgings of Mr Jerry Cruncher.  It is named after a house called the Hanging Sword, but is also known as Ouldwood Alley, and previously called Blood-bowl Alley, named after another house there.

Hart Street.  Little is known about the origin of the name, but what makes this street special is the church St Olave Hart Street.  St Olave (or Olaf) was an eleventh century Norwegian saint.  The church, which has been there since at least the thirteenth century, stands on the corner of Hart Street and Seething Lane.  (Seething is a village in Norfolk, so perhaps no surprise that John Betjamin described it as “a country church in the world of Seething Lane.”)  It is one of the smallest churches in the City and one of only a few to escape destruction in the Great Fire of London.

Ironmonger Lane.  This narrow street has existed since the 12th century at least, because it was the ironmongers’ district.  It was only one of two entrances to the Guildhall until the Great Fire of London.  Apparently, Thomas Becket (Thomas a` Becket), Archbishop of Canterbury from 1162 to 1170, was born here.

Ivy Lane.  Named because of the Ivy that grew on the walls of the prebendal houses belonging to St Pauls.  These buildings were later converted into offices but then destroyed in the Great Fire of London.  Dr Samuel Johnson is reputed to have held one of his literary clubs in Ivy Lane.

Jerusalem Passage probably gets its name from a pub called the St John of Jerusalem which stood until 1760 - the City is steeped in religious history, and a number of pubs, etc, are related to religious events.

Johnsons Court.  Samuel Johnson lived here from 1765 to 1776.  Was it named after him?  That much isn’t clear.  The museum bearing his name is just around the corner in Gough Street, so it is entirely possible.

King Edward Street was formerly called Stinking Lane.  After that, it changed name a few times becoming Chick Lane, Blow-Bladder Lane then Butcher Hall Lane.  Back in the thirteenth century, the Grey Friars were given a property in the then Stinking Lane.  The name was changed to King Edward Street in recognition of his founding the nearby Christ’s Hospital, the first of many schools dedicated to educating the poor.

Kings Head Court is named after the Kings Head Tavern that once stood here.

Leadenhall Street named after a “leaden hall,” a large mansion in which Sir Hugh Neville lived around 1309.  (The Neville’s were a well-known family in the Middle Ages, a leading force in English politics.  Dick Whittington, Lord Mayor of London, bought it in 1408, and presented it to the City of London Corporation.

Lime Street is so named because lime was made and sold there.

Middlesex Street was formerly called Petticoat Lane, which is how it is still commonly known, famous for its street market.  The street market is actually two markets: Wentworth Street, which is open six days a week and “the Lane,” or Petticoat Lane, open only on a Sunday.  In Tudor times, it was known as Hogs Lane, where City bakers were allowed to keep pigs just outside the city walls.  By the 17th century, the area had become known for second hand clothes.  The Lane is close to Spitalfields, the area in which the Huguenots lived when they first came to England, fleeing persecution in France.  It is one of the oldest street markets in England.

Telesto, that 'piece' I am writing for my client is now going to be 8-10 parts of around 1,000 words each. How I thought I could get it into one article, I will never know. And my poor old audit-battered brain has just popped up with an idea on how to finish the series of goal-setting monthly updates I was writing LAST year. PTL the auditors visit next week so I don't have to sit on that idea for too long.

Housework? I what? I struggle to finish a bowlful of washing up these days, hocked out the ironing to the ironing service last night and only just managed to clear another load of washing earlier. Back on the 10 hour days again and as it's now Freshers' Flu season too, struggling with germs-a-go-go. Writing about street names sounds tame by comparison.

Telesto, As with everything, street names have their own stories. Thanks for telling some of them for them.

Housework? Oh yes, that's what you do instead of sleeping isn't it?

Tell me about it! 10 hour work days plus writing and eBay in the evenings, housework occasionally too. One of my pieces for my main client has scuttled off into the realms of epic, currently being at least 5 parts.

Ha ha ha! It's just that life is so mad at the moment, I didn't have time to do the whole alphabet in one go! 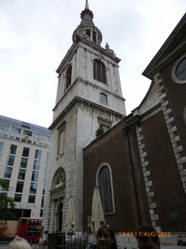