When Peter the Great of Russia Visited England in 1698

In order to build up his naval fleet, Peter the Great of Russia spent time in Deptford, London learning English shipbuilding techniques. He worked hard, but played hard too!

Peter the Great might have been the Czar of Russia, but he was also a very naughty boy! Smart, handsome, curious, and prepared to get his hands dirty with the shipwrights at the Royal Dockyard, Peter was no slouch when it came to having a good time!

Peter the Great was the 17th century equivalent of the rock star who trashes his hotel room. Peter managed to trash not just an inn room, but also a whole house! Oh, and a large garden as well.

Czar Peter The Great of Russia Arrives in England from Holland

He comes to learn shipbuilding

To build up his naval fleet, Peter had spent time in Holland learning the art of shipbuilding. However, Dutch methods lacked the mathematical precision of English shipbuilding and Peter was determined to study England’s superior techniques.

In January 1698, Peter the Great arrived in England from Holland. The London Gazeteer had given the public detailed information on Peter’s activities in Holland , especially his meeting with William III who had happily given him permission to leave Holland and visit England.

The public was fascinated by Peter who insisted on spurning the niceties of royalty. Despite travelling incognito, (rather ambitious when he was nearly seven feet tall!) crowds followed him everywhere.

Peter soon became notorious for his unconventional behaviour. Amongst his unusual pursuits were the following:

Not that bad, you might say. But most notoriously, Peter and his comrades leased Sayes Court, Deptford, from the diarist, John Evelyn, for two months until their return to Russia. It was a beautiful house, the garden being Evelyn’s pride and joy.

But more of that later - in the meantime, Peter had to have his portrait painted...

Peter the Great Has His Portrait Painted in England

What a magnificent painting this is of Peter the Great! And what a handsome specimen the young Czar is!

In this work by the popular society painter, Godfrey Kneller, Peter looks every inch the charismatic ruler. With his rich, ermine-lined cloak, his brilliant, shining suit of armour, one graceful dancer's leg displayed prominently for our admiration, the classical Grecian curls framing the youthful, confident gaze of the attractive, twenty-five year old autocrat, he is the picture of vigorous majesty.

And we feel as though we are looking slightly up to the great man, which is of course, as it should be. But not too much, as this portrait was a present from Peter to King William III of England.

ehind him, in an alcove, rests Peter's great crown and through a window we see English ships emerging from stormy, war-like skies, touched by the sun.

The artist, whilst fulfilling traditional expectations of royal portraiture by surrounding Peter with formal attributes, has nevertheless captured the restless intelligence of this most unusual Czar.

Even though his subject is standing still, we get the feeling that he would like to bound out of the room as soon as possible. His right arm is bent at an impatient angle which anticipates a strong, unforgiving grip, his right hip is thrust forward as though Peter will any second now stride forcefully away to attend to matters involving urgent affairs of diplomacy. His keen, intelligent eyes look beyond us mere mortals, to a bright future.

Well, yes, possibly....in reality Peter was probably itching to get back to his rented house in Deptford, to be with the lads, have a good booze-up and trash the place over in true rock star manner.

In the meantime the traditional niceties of royal portraiture had to be respected.

More About Godfrey Kneller's Portrait of Peter the Great

And where you can see it!

And here's a self-portrait of Godfrey Kneller himself.

Godfrey Kneller's painting of Peter the Great is a triumph of royal portraiture and can be seen in all its glory at Kensington Palace, London.

Many royal portraits make the viewer peer through a coded veil of signs and signals, a clutter of attributes and mythical parallels that do everything they can to hide the flawed mortal behind the gilded screen. That was, after all, the artist's job.

Kneller's genius is that he has ticked all the appropriate boxes, yet made Peter a compelling and charismatic personality with just a hint that there's a bit more to him than meets the eye.

Czar Peter The Great and Life in Deptford

As mentioned above, Peter and his group leased Sayes Court, Deptford, from the diarist, John Evelyn. They stayed  for two months until their return to Russia. But during that brief sojourn, what was once a thing of beauty became the equivalent of a war zone.

Sayes Court was soon reduced to a muddy quagmire. In a drunken game with wheelbarrows the group charged through the hedges. In addition, Peter had no qualms in knocking a hole through the garden wall to gain direct access to the Royal Dockyards. Inside, the paintings were used as dartboards and chairs were used for firewood. Sheets and curtains were ripped to shreds and carpets destroyed.

He seems resigned to having his house trashed...

And Here's a Statue of Peter the Great In Deptford

It was a present from the Russian people to London

But let's be fair. Of course, notorious behaviour will make the headlines and young royals are as keen as anyone else to let rip. But Czar Peter the Great's serious pursuits whilst in England cannot be overstated.

The man was a hands-on, autodidact, bursting with curiosity and enthusiasm about everything around him and not afraid to get down and dirty in the docks with the groundlings, learning all he could about the trade and working as hard as his humble companions. (In fact, Peter's 'can do' attitude extended to every aspect of Czarist affairs, including personally torturing his enemies - including his own son...).

Apart from working in the docks, he also

Books About Peter the Great (and shipbuilding)

The book by Massie is excellent

Peter left England in April. He was reluctant to leave the Thames, his boats and fellow workers. He didn’t hesitate to entice hundreds of specialists to follow him home where they apparently enjoyed good wages and the knowledge that they were contributing to the modernisation of Russia .

Items Relating to Peter the Great on E-Bay

Mira, I am so pleased you liked this article. I am fascinated by Peter the Great! Is the one at Peter and Paul Fortress him sitting down with a bald head? (not quite so attractive...) I also love the Bronze Horseman which Catherine the Great had made in his honour. Thanks so much for your interesting post!

This was a fabulous article, Kathleen! I loved the topic, the meat of it, but also your description of Kneller's painting and the other paintings and photos you chose to illustrate the text. That statue of Peter the Great in Deptford is so unusual! I looked it up online and learned it's not the only weird statue of this czar! There's another one at the Peter and Paul Fortress in Petersburg. Somehow I became fascinated with strange statues reading this article . . . !:) Thank you so much for putting it together!

Hello Jack - Lovely to read your post and I am so glad you found the article interesting. I think Catherine advanced Russia into the Enlightenment, but wasn't too keen when it was taken literally by Alexander Radischev! I find Peter fascinating, warts and all!

Found this fascinating. Studied Russian History at University (about 50 years ago) and when I next saw the lecturer, he had become a great president of the entire institution, New York University. Although male, I have to say that the monarch known as Catherine the Great probably contributed as much if not more to modernising Russia, and she too was no slouch at having a good time! 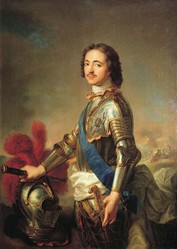 Peter the Great: His Life and World
17%  0   2 KathleenDuffy
United Kingdom of Great Britain and Northern Ireland

Whether a native Russian or an interested Anglophile, London is home to a number of organisations catering for those who are fascinated by Russian culture.
24%  0   3 KathleenDuffy
Modern History