White-tailed deer, as New World natives with a homeland stretching across North America and South America, are honored as national, provincial, and state symbols.

New World natives with worldwide appeal, white-tailed deer (Odocoileus virginianus) received their official description from an encounter with the fleet mammal by a German traveler in the Colony of Virginia in 1780.

Whitetails have been transplanted successfully outside of their native range elsewhere in the New World. They have been in Oceania since the first decade of the twentieth century. Successful introductions into the Old World include transplants in:
• Central Bohemian Region of modern-day Czech Republic in the 1890s, and
• Pirkanmaa Province (Pirkanmaan maakunta) in southwestern Finland in 1934.

Twentieth and twenty-first century acknowledgments of whitetails as significant dwellers of economic and environmental landscapes include New World and Old World recognition as governmental symbols on state, provincial, and national levels.

As vegetarians, whitetails seek food in forests and meadows; gardens are opportunistic sources:

Odocoileus virginianus is commonly known as white-tailed deer, whitetail, or Virginia deer. Its genus name, Odocoileus, was devised in 1832 by linguistic-scientific polymath Constantine Samuel Rafinesque (October 22, 1783 - September 18, 1840) to apply to a genus of medium-sized deer in the family Cervidae with two species native to the Americas.

Their native geography encompasses all of the continental United States except for Utah and the southwestern coast of California. Whitetails are not native to Alaska, Hawaii, or Puerto Rico.

On the South American continent, whitetails are native to northern and central Colombia, most of Venezuela, French Guiana, most of Suriname and Guyana, and the states of Amapá and Pará in northeastern Brazil. Disjunct, or separate, populations are native to coastal and eastern Peru and in a small northwestern sector of La Paz Department in northwestern Bolivia (Estado Plurinacional de Bolivia).

Ideal habitat: woods for sheltering, fields or meadows for grazing, leaping and running

In their native distribution from Canada in the north to Bolivia in the south, whitetails are acclimated to widely varietal habitats. Their ideal habitats balance the shelter of dense thickets or woodlands with the food sources of edges, such as fields and meadows. Nevertheless, their habitats vary with the terrain. Thus, in the United States they inhabit the deep woods of northern Maine, the cactus and thornbrush deserts of southern Texas and Mexico, and the deep saw grass and hammock swamps of Florida.

Northern whitetail populations tend to be larger and heavier than southern populations. Whitetails have an average body length of 5 to 6-1/2 feet (1.5 to 2 meters). Their tails measure 4 to 11 inches (10 to 28 centimeters). Their height at the shoulders reaches between 31 to 39 inches (80 to 100 centimeters).

Adult coats vary in color seasonally, with red brown dominating in summer and fading to grey brown in winter.

Whitened fur encircles their eyes and sprays over the chin, throat, and upper insides of the legs. A band of white is located behind the nose. The inside of the ears, their belly, and the underside of the tail are also splashed with white.

Fawns, or young deer, which are born in the spring, have red brown or yellow brown coats spotted, like bleached freckles, with white. Their distinctive spots gradually fade so uniform coloring appears between 3 to 5 months of age. A yearling is a young deer that has completed its first year of life.

Deer hooves leave tracks reminiscent of split hearts. The pointed end of the track points to the direction in which the deer is heading.

Bucks, or adult male deer, are distinguished by impressive antlers, which appear in April or May and are shed from January to March. The size and branching of antlers are determined by such factors as age, genetics, injury, and food quality and quantity. Healthy, full branching, therefore, indicates that the buck is securing sufficient, good nutrition. The densest antlers usually are produced between the ages of 4-1/2 and 6-1/2 years of age.

Nubbins are skin-covered bumps on the forehead which may emerge in male fawns around six months after birth. These nubbins eventually grow into hard antlers when males are halfway between their first and second years of life.

Spikes are unbranched antlers, which may be seen in yearlings, that is, deer
between one to two years of age.

White-tailed deer are swift, bounding easily over 9-foot-high barriers and attaining running speeds of up to 30 miles per hour through tangled forest terrain and swimming speeds of 13 miles per hour. Agile and lithe, whitetails easily clear heights up to 8-1/2 feet (2.6 meters) and clear about 30 feet (9 meters) in a horizontal bound.

Although a maximum life span of 20 years is possible in the wild, it is estimated that most white-tailed deer only live for two to three years and a 10-year-old deer is a rarity.

A whitetail's age is determined from its teeth.

Does produce one litter per year. Gestation lasts about seven months. Over their native range, whitetail does give birth from April to September. In North America, birthing occurs in the late spring, from May to early June.

After the first year, young males separate from their mothers while young females often remain for another year with their mothers.

Vulnerability of does and fawns is especially high during weaning, which stretches for eight to ten weeks after birth. In the first month, fawns may be left in hiding places in dense vegetation for about four hours at a time while does search for food. In the case of twins or more, each fawn is set up in a separate hiding place.

After four weeks, fawns forage alongside their mothers. As ruminants (Latin: ruminare, "to chew the cud"), whitetails have stomachs divided into four compartments; accordingly, whitetails temporarily store undigested food for a later time to be regurgitated and chewed properly. Two months after birth fawns are fully ruminant.

Whitetails require a nearby water source for their natural diet.

As herbivores (Latin: herba, "small plant, herb" + vorare, "to devour"), whitetails are vegetarians. Their natural diet focuses on fungi, grass, leaves, lichens, nuts, plants, and twigs. Green plants, including aquatic plants, have their attention in summer. Food sources shift in autumn to corn and nuts. Woody vegetation, including twigs, are featured in winter.

When their habitat overlaps tightly with human inhabitants, whitetails graze on crops, fruit trees, ornamental plants, and vegetable gardens, often to the annoyance of farmers and gardeners.

a tributary stream of Potomac River popular with whitewater kayakers

The grace of whitetails and the majesty of white-tailed bucks are familiar images throughout the world. This familiarity is perhaps due to Walt Disney's beloved film, "Bambi," but it is certainly due to successful introductions of these magnificent mammals elsewhere in the world.

Whitetails were successfully introduced in the 1890s into the Dobříš Forest in the Central Bohemian Region (Czech: Středočeský kraj) of modern-day Czech Republic.

Transplanted to Pirkanmaa Province (Pirkanmaan maakunta) in southwestern Finland in 1934, whitetails are recognized as the provincial animal there.

Governmental symbols: popular as a national, provincial, and state animal

In the United States, the white-tailed deer serves as a state symbol for eleven states:

The first state to recognize whitetails was Wisconsin, where momentum for designating the badger (Taxidea taxus) as the state animal was countered by a bill introduced by the state's northern countries proposing whitetails instead. Wisconsin's large native deer population, the whitetail's physical attributes, and the economic benefits accrued from the annual deer hunt were all extolled. A compromise was reached on May 31, 1957, with the establishment of a second category, as state wildlife animal, for white-tailed deer.

"The whitetail deer is an animal that is found in abundance in the wooded areas of our Commonwealth and has played an integral part in solving the problem of survival of our early settlers and Indian population. The 'whitetail,' as it is affectionately referred to, is a proud and noble animal possessing intelligence, endurance and character. Therefore, the 'whitetail deer' is selected, designated and adopted as the official State animal of this Commonwealth."                 (71 Pennsylvania Statues § 1007. State Animal)

The most recent designation of whitetails as state animal occurred with the enactment on June 11, 1997 of Michigan Public Act 15. A first analysis of House bill 4162, State Game Mammal: White-tailed Deer, on May 1, 1997, presented the salient pros and cons of white-tailed deer in proximity to human environments, opposing viewpoints which are echoed throughout much of the whitetails' native territory.

Nevertheless, the designation was clinched, and the "widely hunted" joined the roster of Michigan state symbols.

Two other countries in whitetails' native range also have selected this deer as an official symbol.

competent and graceful in water, whitetails easily swim at a speed of 10 mph (16kph)

Prior to European Colonialism, which began in the sixteenth century, white-tailed deer, as New World natives, were unknown mammals beyond the eastern and western shores of the continents of North America and South America.

By the early decades of the twentieth century, however, whitetails had become familiar outside their native homelands in disparate New and Old World places.

Modern-day recognition of whitetails as familiar mammals on the world stage has been affirmed through adoption of these fleet representatives of wildlife as governmental symbols in their native lands as well as abroad.

One of the New World's many best-kept secrets has become a household name on a global scale.

White-tailed fawn: a mammal dwelling in varied habitats, including snow

molajen, Thank you for visiting my article, and thank you for sharing your fine photo of antler velvet via Flickr. I like to spotlight talented photographers, like you, who make a difference through photography.

Great article on whitetails! Thanks for choosing one of my photos to illustrate velvet on antlers.

jptanabe, Whitetails are so photogenic that it's difficult to get a bad picture of them!

Planting perennials that are disagreeable to white-tailed deer is a successfu... 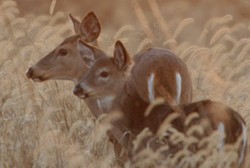 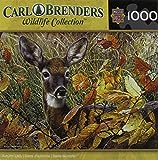 Deer-proof shrubs, for natural unpalatability to deer, serve as an effective strategy for keeping whitetails out of gardens.
72%  9   6 DerdriuMarriner
Garden Pests 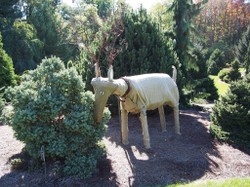 Planting perennials that are disagreeable to white-tailed deer is a successful, green strategy for deer-proof gardens.
Loading ...
Error!