In which we introduce this lump of protoplasm which is me.

I'm taking a big chance here, writing this before lunch.

If I stop suddenly, in mid sentence, then you know I've abandoned the keyboard and have gone to get some chow.

I admit, starting a relationship with a new writing community with a warning like that is pro

What were we talking about?

Oh, yes.  I was introducing myself.  But then the oven went "ding" and that meant the ribs were done.  I love you all dearly, my new writing friends.

But these were RIBS!

So, now that we've answered one of the questions in the headline, let's address the others.

Strong Men Tremble When They Hear It!

They've got cause enough to fear it. It's much blacker than they smear it. Nobody mention's...

I have the TV on in the background.  They just mentioned a guy who had a heart attack while eating something called "The Triple Bypass Burger."

HILARIOUS!  See.  That's the kind of person I am and the sort of stuff I find humorous.

Maybe that is why God is smiting me and my family.

And I Live Way North of Capitol Hill

Elkridge is in Howard County, which I like to tell people was named after one of the Three Stooges.  Shemp, in particular.

I'm lying when I say that, but does it really matter?

I'm a 57-year old guy who has had Parkinson's disease for 12 years.  I was diagnosed three weeks after my 45th birthday.  And now, the disease has progressed to the point where my mobility is severely limited and I can no longer manage the commute to and from my former gig as a writer/editor for the National Institutes of Health in Bethesda, Maryland.

I loved that job.  And I loved the people I worked with.  Still do.  Love them, that is.  I don't work with them any more.  I'm retired now.  Had to.  Couldn't handle the commute.  But I said that already.  That's another thing about Parkinson's.  It makes me ramble.

But God wasn't done with me yet!

There Sits Me Wife, the Idol of Me Life

She is trying to get my attention by pointing to a bit of pastry. That generally works.

Nope. God Wasn't Quite Done with Me or My Family Yet.

We love God. And I'm not kidding about that. But his sense of humor leaves us... befuddled?

Remember, this is GOD we're talking about.  The Omnipotent, All Powerful, Creator of Everything.  I just don't think he's all that concerned with our petty concerns, although I do believe he answers prayers... as long as you pray for the right thing.

Ya Gettin' Any of This, God?

Knock once for yes, twice for no.

Give Us This Day Our Daily Poke in the Ass

Or bread. Whatever you have handy.

...is the strength to deal with whatever random thing happens to you and the people you love.  Gail and I both believe that humor is a key component with dealing with stuff.  That's why we attack our various ailments with a sense of humor.  You can see this humor put to work on these websites.

Here's Where We Deal With Our Various Ailments with Humor

Because, if we've learned ANYTHING from the Readers Digest, it's "Laughter is the Best Medicine."

Livin' La Vida Parkinson;s
This is where I write about my Parkinson's disease.

Famous Squamous
Where I discuss our hand-in-hand stroll through the valley of tonsillar cancer.

My Hub Pages
Where I Vent My Spleen about Conservatives.

And now that we know each other a little better...

Watch for me to pop in from time to time to either whine about one of our various ailments or to vent my spleen about Conservatives or Right Wing Morons.

I write books, too!

Maybe you would care to purchase one?

Very nice to meet you! My husband and I used to work for Alban CAT in Elkridge MD. We now live in Stafford VA and work in Richmond. Can't wait to read more of your pages.. Welcome to Wizzley! 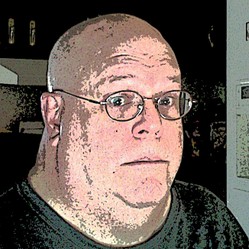 Republicans MIGHT forgive him being gay, but for this other thing? Umon 02/18/2012