Why Are Yawns Contagious?

When you see someone yawn, often you will also yawn. Have you ever wondered why? Find out why?

You are very likely already yawning while reading this article. But don't worry, I know it's not because you are bored. I just barely got started, it's doubtful you're bored already.

But I also know you could be yawning because research shows that at least 60% of people will yawn when they see someone yawn, see a picture of someone yawning or even if they just read the word yawn.

Why? Well, why do we yawn and why do so many people yawn when other people are yawning?

Why do we yawn?

First, it should be stated that many of us have been yawning since we were in the womb. Also, humans are not the only creatures who yawn. Chimpanzees do it, dogs do it, birds do it and even fish do it.

But why all the yawning?

One theory, backed by research, states that we yawn to cool our brains. Brains use up 40% of the body's metabolic energy and, consequently, get pretty hot. When we yawn, we stretch the jaw muscles and increase blood flow to the head, as we increase air into the sinus passages, mouth and nasal cavities. Cooler blood goes up to the brain and warmer blood goes down into the body. Cool air is inhaled and warm air is exhaled.

Why do we yawn when others yawn?

One very convincing theory, backed by research, is that we yawn when others yawn out of empathy. We put ourselves in another person's shoes by feeling what they feel. So, when they cry, we are liable to cry; when they laugh, we might laugh. When they yawn, we are likely to yawn.

Researchers have connected this, also, to social bonding. People would look to the group to stay alert. It has been shown that yawning is used in anticipation of events and for transitions. Seeing a member of the group prepare in such a way could make others in the group follow suit.

This is backed up by certain physiological changes that the body goes through during yawning.

That empathy plays a role in contagious yawning is also supported by studies using MRI scans that showed that, when this yawning occurred in subjects, the part of the brain that helps us feel what others feel was activated.

What is equally interesting and relevant is who yawns contagiously. It doesn't seem to occur with great frequency until the age of 4. Also, people with severe autism do not yawn just because someone else yawns.

This has led some researchers to seriously consider biological reasons for contagious yawning, considering, also, the possibilities of finding an answer to such conditions as autism and schizophrenia.

Fact is, it's still a mystery exactly why we yawn when other people yawn. There is strong evidence pointing to old hard-wired empathy and some evidence pointing to biological reasons for why yawns are contagious for most of us. But none of it proves totally that we are yawning when someone else yawns for either of those reasons.

Are we just copy-cats? Well, even if we are, mimicking yawning might point to other reasons for mimicking. There is reason to believe that some empathy is rooted in mimicking; for instance, feeling what someone else feels so that you can empathize with them.

As stated, some people with conditions that make their brain and neurological systems different, like those with autism, show signs that, for them, yawns are not contagious. Is there something different in their brains that makes them not yawn when you yawn? Could be.

Researchers' interest in this subject has been piqued by their previous studies on the subject, so it is very possible in the future we will learn more about why yawns are contagious and might even discover exactly what's going on with autism.

Until then, we will just have to accept the fact that we yawn uncontrollably when people around us yawn, and enjoy the cooling of our brains in the meantime.

Glad you liked the article and glad you stopped by, Candy!

I was yawning while I was reading this article, and I wasn't bored at all. Thanks for the insight on yawns.

Individual in dissociative fugue suddenly looses their memory of their identi... 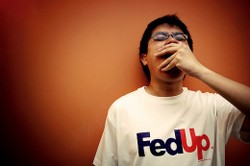 Surgery is an amazing tool preventing many life threatening events from derailing your life. Learn to end your fear of surgery and conquer optimal health. Avoid fear of surgery
75%  16   5 Mladen
Psychology and Psychiatry

Individual in dissociative fugue suddenly looses their memory of their identity and leaves their physical surroundings. In some cases one can assume new identity.
Loading ...
Error!