Why My Parents Said "No" To Scientology

My parents eagerly practiced Dianetics when it first came out, but alarm bells went off the night red headed L. Ron Hubbard introduced their group to Scientology.

My father was a BIG science fiction fan, who had started collecting Astounding Science Fiction magazine as a teen (and any other pulp sci fi he could get a hold of), so of course he was familiar with L. Ron Hubbard as a pulp science fiction author. My father was also a WWII vet, who felt the need for therapy to deal with, among other things, his war experience. He had been a radio operator on army planes that flew "The Hump" (the eastern Himalayan mountains) on weekly supply runs into China. Considered some of the most dangerous non-combat flying missions of WWII, the crew never knew if they would come back alive. So, when he found an article in the May 1950 issue of Astounding Science Fiction magazine, titled: Dianetics: The Evolution of a Science, by L. Ron Hubbard, he was naturally intrigued. This article introduced many of the principles of Dianetics, and predates the book Dianetics: The Modern Science of Mental Health. The idea of self-therapy interested him very much. It was a radical idea in 1950, when psychiatry was primarily Freudian based( which had become a turn-off to him and a lot of other people), and expensive.- much too expensive for he and many other veterans who, only five years after the end of the war, were still struggling up the career ladder. My mother was also interested as were their best friends Ted and Nora. Together, they joined a small San Francisco Dianetics group (one of many that had newly formed) and attended meetings together for months, but what started out as a journey of self discovery and enlightenment, soon turned into bitter disappointment.

It Started With Dianetics 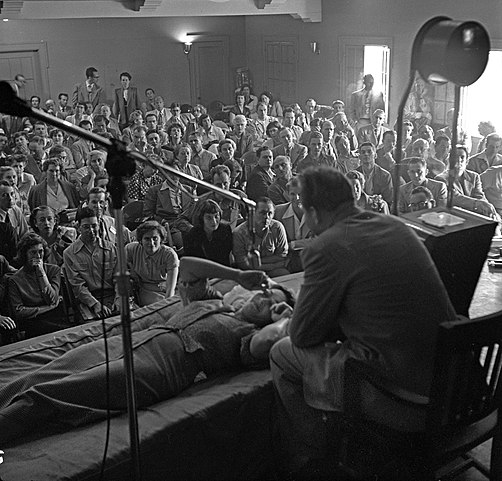 In The Days Leading Up To Scientology

The Only Expense Was For Coffee, Wine, Cheese And Crackers

My parents lived in San Francisco then, one of six cities L. Ron had targeted to launch Dianetics. In the early days, the groups were informal, often forming through classified ad notices. My parents, along with Ted and Nora, joined a group with around eight other people. The group was mostly composed of couples and most of the men were WWII vets. One member of the group was a reporter for the "San Francisco Chronicle", who hoped practicing Dianetics would cure him of chronic migraines. My own parents were not religious, but most of the rest of the group attended various church's and synagogs (of course, Dianetics was not a church or a religion, so that was not an issue). The group attended preliminary meetings while they were waiting to receive the first copies of the book "Dianetics: The Modern Science of Mental Health". Shortly afterward, when the book was published, they would meet every three weeks to discuss and explore it. The meetings were completely free. They brought coffee, wine, cheese and crackers. According to my mother, their greatest interest was in tackling "engrams". Engrams were defined by Hubbard as: "a complete recording of a moment of unconsciousness containing physical pain or painful emotion and all perceptions." These engrams were said to cause adverse physical and emotional effects throughout one's life, as well as previous lives. The idea was to locate and identify the engrams through the process of auditing, then to clear them away. Auditing involved regression, including past life regression, with the purpose of finding the cause of personal engrams. The group audited with family or friends and discussed the results at meetings. Some members volunteered to be audited and to audit at the meetings for observation and practice. There was no machinery involved and trust was paramount as light hypnosis was used. Interestingly enough,the reporter's migraines ceased. Maybe that shouldn't be surprising. These techniques without the assigned names, are not very unlike modern therapy. At no time were aliens mentioned.

Word came that L. Ron Hubbard would be speaking in San Francisco and bringing exciting news about some changes to be made in Dianetics. It was a cold, foggy night when my parents got to the Union Hall it and it was standing room only. My mother was very pregnant and they had my oldest brother, then a toddler in tow. A number of men in suits were seated on stage, including a more casually dressed man with red hair. This was L. Ron Hubbard. The suited men spoke first, warming up the audience and setting the stage for the BIG announcement. Then it came: There would be a name change. Scientology was the new name. They would seek religious status with the IRS. There was dead silence, then groans and protests were heard throughout the audience.  He expressed assurance then, that the only reason was for the financial advantages of the religious non profit status. He also said that nobody would be expected to give up their own religious affiliation. That quieted the protests, but dismay and distrust stayed like a boulder. He then announced other fundamental changes that would alter what had been Dianetics . There would be formal structure. Auditors would be trained (for a FEE), a device called an E-meter, used for auditing would be sold in the lobby. L. Ron Hubbard suddenly looked and sounded like a snake oil merchant. All facets of self-help were now removed. To my parents and Ted and Nora, the writing on the wall was painfully apparent. Their group met one more time before it disbanded. Many in the group decided to continue to use some of the techniques that had been helpful in their private lives, but that would be all. They would never participate in what they viewed would become a controlling "church", concerned with making money. My ninety-one year old mother says she has "Never been surprised at the direction Scientology has taken. After all, it was created by a pulp science fiction writer".

This article is based on the recollections of my ninety-one year old mother, who is sharp as a tack, with a memory that is often better than my own. I was born in the early 1960s, so I was not on the scene when my parents were involved in Dianetics. I am eternally grateful that I was not raised in Scientology, because I could have been, if my parents had not been in possession of a healthy bit of cynicism.

L Ron Hubbard claimed to have all sorts of knowledge, including the truth abo... 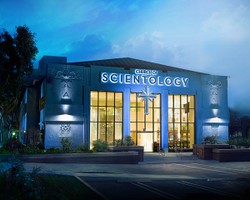 Vegan Gifts For Birthdays And Holidays On Zazzleon 05/13/2014 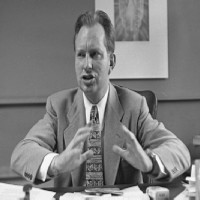 L Ron Hubbard claimed to have all sorts of knowledge, including the truth about flying saucers. It is belived that you can learn about them in Scientology.
100%  30   15 frankbeswick
Christianity