Why Would Someone Abuse a Child?

Knowing why some people sexually abuse children can help us better understand how to help victims/survivors and their families as well as in the design of effective prevention.

There are multiple motivations for sexually abusing a child. Some who abuse are pedophiles and some are not. It is important to fully understand the term, pedophile, and this will be explained below.

A person who abuses children may do so for many reasons, none of which are excuses for abusing and it is never the child’s fault. The three major factors will be described in this article.

Why do Some People Sexually Abuse Minors?

The three major factors leading an individual to perpetrate sexual abuse include:

Definitions of Pedophilia and Hebophilia

Pedophiles are sexually attracted to children before puberty, usually under twelve years of age.

Hebophiles are sexually attracted to minors after puberty, usually over the age of twelve.

Pedophiles and hebophiles are, necessarily, adults.  One does not label as pedophile a 16-year-old who abused a child. Teenagers who commit abuse are considered as having sexually reactive behaviour problems and should be offered therapy rather than a prison sentence.

There are also different categories of pedophiles/hebophiles:

Exclusive pedophiles/hebophiles: They are only interested sexually in children or youth of a particular age range. That does not mean that they cannot have sexual relationship with people outside that range, but that that is their only sexual interest.

Regressive pedophiles/hebophiles:  These are individuals who may or may not be sexually interested in children or youth and have normal adult sexual relationships. However, at some point in their lives, faced with a serious problem (illness, illness of partner, loss of partner, other painful loss, etc) they turn to a younger person to satisfy a need for emotional closeness. They may not intend to turn the interaction into a sexual one at first, but they lose sight of appropriate boundaries and exploit the naivity and need for closeness or the trust on the part of the child or youth.

Behaviors of Pedophiles and Hebophiles

There are adults, usually men, who repeatedly sexually abuse children or adolescents over the course of their lives, purposefully seeking them out in order to abuse them. Pedophiles and hebophiles generally prefer minors of a particular age range, such as 6-8 for the former or 14 for the latter.  The pedophile may have no more use for the child once that age is reached and then he or she seeks out others  to replace victims who grow older. The hebophile generally has no use for children; therefore, pre-pubertal children are safe with him or her, but at puberty they become vulnerable to abuse.

Even if pedophiles and hebophiles have adult partners and appear ‘normal’ to the outside world, they have a sexual preference for children or teenagers.

They are usually clever at rationalising what they do and they blame others for things that go wrong in their lives, not taking responsibility for themselves.  Some professional writings which seem to be reports of scientific research claim that sexual relations with children and adolescents is not harmful. The pedophile community is responsible for this sort of thinking. Adult-child sexual relations always constitutes abuse although, if the abuse is carried out without physical violence and without scaring the child, the victim may not feel traumatized by what happened. That still does not mean that the child wanted the sex or understood what the behaviours meant.

It must be clarified that adult-teen sexual relations are abusive if there is over five years difference in age between the partners. Therefore, a 20-year-old having sex with a consenting 17-year-old may not be abuse. The nature of the relationship would need to be examined before labelling this as a crime.

Some pedophiles or hebophiles deliberately seek out single mothers with children in order to get the opportunity to abuse them. They become part of the child’s trusted circle of adults and as such can easily betray this trust.

It is never the child’s or teenager's fault - the adult is the one who makes the decision how to behave. The victim was not chosen because he or she was acting sexually, being over friendly or any other excuse the abuser might suggest. The victim just happened to have been available and the abuser decided to take advantage of this.

The typical child abuser is pictured as male but there are many female abusers as well. There are no reliable statistics available because this sort of abuse is the most difficult to talk about. Even many professionals and survivor groups find it hard to discuss this issue. The general public finds it hard to accept that women can sexually abuse minors because women are supposed to take a caring role in a child’s life.

Those who have experienced this sort of abuse may feel very isolated but it happens more than one might expect.

When a female abuses a child, the abuse can easily be hidden behind claims of caregiving – washing the private areas, putting on cream, checking that everything is alright, etc. If the child feels uncomfortable, if the child is old enough to manage alone, if it is repetitive and done without a good reason, then this is abuse. It may go on for many years, from the time the child is small until late adolescence, and it is difficult for a child to recognize this as abuse even when older.

Abuse by females is just as psychologically damaging as is abuse by males, especially if the abuser is the child’s mother. Survivors abused by men might think that female abuse is less harmful, less violent and easier to get over. It is not,

Abuse by a mother has been shown to be the hardest for the victim to accept and to recover from. The lack of normal boundaries, of a healthy role model and the impact of having receiving the opposite kind of relationship from what one expects from a mother [protection, care, support] is devastating. A mother should be there for her child - but in an abusive relationship, the child is there for the mother to use and manipulate for her own needs.

Abuse of girls by a woman does not mean that the victim is gay. A normal biological reaction to being touched sexually is to be sexually aroused and this does not make the girl a lesbian. It is particularly confusing for the victim to have a normal sexual response when it is her mother or other female caregiver causing it.

Women can Abuse Teenagers As Well

There is the myth that suggests  that the female perpetrator  was doing the teenage boy a favour and ‘making a man of him’ by having sex with him. The teenager might boast that he had been with a woman but not admit that actually it was an abusive relationship. Pride and shame become mixed.

Why would a mature woman want to have sex with a teenager? As for men, the issues of power and control are likely central. "Breaking in a youth", "teaching him the ropes", may give her a sense of superiority. But intimate relationships are not supposed to be about power, control and superiority. In such a relationship, does the boy actually have the right to say "no"? Did the woman promise him everlasting love or manipulate him in some other way? This is abuse!

Other Articles I have Written on Child Sexual Abuse

I will continue to add more links as I write them.

Child Sexual Abuse - Is Recovery Possible?
Giving a more positive view than that generally presented in the media - Yes. One CAN overcome the negative effects of sexual abuse trauma.

Recognizing Child Sexual Abuse
What are the behaviours that can be considered abusive?

Therapy for Children and Teens Who were Sexually Abused
A brief description of the approaches to therapy for young people who were sexually abused. Children can grow up to lead satisfying and healthy lives even after abuse.

This is a Controversial Topic - What do You Think?

You are right, Brenda. It also wasn't told because of threats made by the abuser to the victim and because there was nobody really willing to believe it. I have had clients who are now between 60 and 70 years old who came to me over the almost 30 years I ran a clinic for sex trauma survivors. They came to heal from the sexual abuse they suffered as children.
Last year I was in a cab to a TV station where I was being interviewed about a recent case on gang rape of a teenager by her schoolmates; the cab driver told me how he is so ashamed that he knew something like this was happening to a classmate (20 years earlier) and he did nothing to help it stop. What they regarded then as her "loose" behaviour, he now realizes was rape.
We are much better now at recognizing sexual abuse, molestation and sexual harassment than we once were. That makes it possible for more victims to come forward today. And still, they face disbelief, ridicule, blame for having brought it on themselves in some way. It's a long uphill battle.

Excellent article. A friend and I are always discussing this. She says that these things didn't happen 50 or 60 years ago. I say it has been around since the beginning of time. The media didn't report it as much, because it wasn't told due to the shame and stigma associated with it.

It just make me sick. Honestly anyone harming a children should be locked away period, counseling or not. it is just sick. We had 2 recent cases here in France, when 2 pedophile were released after sentence: both abused and kill a kid. Money and time should be devoted to the victims. Thank you for writing about this tough subject.

Abuse prevention is an important topic.

Written by a clinician and a client for clinicians and clients, this book sho...

Signs of Sexual Abuse in Children or Adolescents

You have an uncomfortable feeling that a child may be the victim of sexual ab... 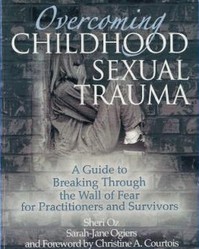 Overcoming Childhood Sexual Trauma: Co-Authored by a Clinician and a Survivor

Written by a clinician and a client for clinicians and clients, this book shows what therapy for child sex abuse aims to accomplish and how it succeeds.
35%  7   2 Sheri_Oz
Abuse of Children 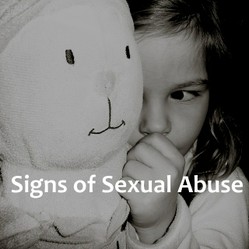 Signs of Sexual Abuse in Children or Adolescents

You have an uncomfortable feeling that a child may be the victim of sexual abuse. How can you tell? You certainly don't want to raise the issue if it's not true.
Loading ...
Error!