How to Write the First Line in Fiction

It is the worst of lines, it is the best of lines. That all important first line can determine whether anyone reads on.

Staring at a blank sheet of paper (or text document) can be terrifying. You have to get it right. Too many creative impulses get nullified at not knowing where to start.

If you're reading this line, then my first one did its job.

Understanding the purpose of the first line, and seeing how other authors have combated it, will help you construct your own.  Good luck!

Step One: See the First Line for What It Is

It's slightly more than just the opening bit of a glorious tale. In fact, it needn't have anything really to add to the story at all!

The first line has one job only. That is to make readers want to read the next line.  From there, they will be finishing the paragraph, then the page, then the whole story.

Forget about scene-setting.  That is sooo the next paragraph. Your first line doesn't even have to make too much sense in isolation, as long as it is barbed with hooks. Interesting things. Things to make the average mind wonder, and seek to find an answer.

I just did it to you. Look at how I opened this section - 'The first line has one job only'. Did you immediately ask 'what job?' or else query my assertion?  That's great!  You read on to find out.

The first line lures. It advertizes. It acts like a billboard enticement.  Come and see my wares!  Enter in here folks!  Wonders!  Greatness!  Things to astound your imagination!

At least it does in theory.  Your readers will be the judge on how well you deliver in the long run. But if you get that first line right, then at least you will have readers ready to judge.

Some humorous slogans to emblazon across an author's chest.

Step Two: Get Tips From the Classic Authors

If a writer has stood the test of time, then their words must be worth reading.

Grab your favorite novel or short story. Open it to the first page and look at how it began. What hooks were laid in those initial words?  Enough to make you read on, I'll warrant.

Perhaps one of the most powerful first lines ever came from Charles Dickens, in A Tale of Two Cities. How did you feel reading it?  What questions did you ask? What did you want to find out? The line has so many hooks that it runs like a barbed wire fence.

Moreover, Dickens made the scale of this thing bigger and bigger with each new statement. It started off as 'times', then 'age', before we're suddenly into an epoch. This feels too large not to know about!

Ok, this is now sounding like an absolute calamity. It's an emergency of life and death proportions. We'd better find out what's going on.

Thus Dickens hooked us into A Tale of Two Cities.

The internet is full of these lists, though the best explanations come from your own mind. What was it about this line that made YOU read on?

The Guardian: The 10 Best First Lines in Fiction

The Stylist: The Best 100 Opening Lines

Step Three: Decide How to Bait Your Hook

Now you've seen how the greats do it, how will you do it?

It is a truth universally acknowledged, that a writer in possession of a good story, must be in want of an opening line. So what did you come up with?

Some authors ramble, piling on the hooks and building up the tension to an unbearable level, like Dickens. Others are more succinct, relying upon a single barb to snag a reader's curious mind. It's practically a throw-away line, but one designed to pique an interest.

The most versatile lines of all inspire the writer as much as they attract readers. If you prompt the questions, then you must be ready to answer them. That, in turn, becomes your novel.

More of my Articles About Writing Fiction

Introducing an Original Character into Fan Fiction
Original characters can make or break fan fiction. Discover tips and tricks for writing people who complement the canon.

Clever Tricks of Creative Writing: Word Crafting
Things can be written in many different ways. The words that you choose will create a mood that subtly works on your reader, like background music in a movie.

How to Get People to Read the Next Chapter
When the end of a chapter creates a natural break, how do you convince readers to keep on reading to the end?

Creating a Character in Fan Fiction
The canon personae are already established. Your original characters need your help. Your imagination breathes life into both.
Updated: 07/11/2014, JoHarrington
Thank you! Would you like to post a comment now?
16

What are your favorite first lines?

You reckon? I've always struggled much more with finishing! I have a tendency to waffle forever, once I get started.

Great advice on writing first lines. Starting is always the most difficult part of writing anything.

You're welcome; and I love that line too. :D

My favorite first line is from Tolstoy's novel 'Anna Karenina' - "All happy families resemble one another, each unhappy family is unhappy in its own way."
Great article, Jo! I'll keep these tips in mind when I start working on my novel!

You are a woman after my own heart! I'm forever coming up with lines while I'm out, then scribbling them on bits of paper too!

It is the opening line, that will make or break the story, I believe. When I write, if that first line doesn't click, there will not be a story. That's why I have learned to carry my noteblock and pen with me wherever I go, because those opening lines usually pop up when I'm not sitting in front of my computer, lol! Great article with great tips.

Wow! He was seriously organised! I have to go sequentially. I'll start with the first line, then keep going until the end. Then just hope that all of the chapter opening lines are good enough. :)

That t-shirt amused me too!

"It is a truth universally acknowledged, that a single man in possession of a good fortune, must be in want of a wife"

I had an English professor who wrote the first line of every chapter before he wrote anything else.

I love that T-shirt in the middle, Jo.

"It is a truth universally acknowledged, that a single man in possession of a good fortune, must be in want of a wife"

I had an English professor who wrote the first line of every chapter before he wrote anything else.

I love that T-shirt in the middle, Jo. 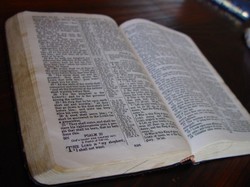