Inclusions to the dictionary have sparked controversy and some have begun to question if language change is good.

OMG I hear you cry! The Oxford English Dictionary has recently added several new textspeak terminologies into their online edition, as well as updating many existing words with additional definitions. This has caused some people to throw their hands up in disbelief, but is this form of language change necessarily a bad thing?

If we are certain of one thing, it is that the OED editors heart (new definition added in the March 2011 edition) language and are certainly not afraid of its ever-changing processes. In fact, they think it’s rather kewl (September 2011). Others however, are afraid that textspeak and internet slang in general are out to corrupt and infest our pristine language.

The OED is defined as an “unabridged dictionary constructed on historic principles”. To many, it represents a prestigious icon for language – a lexical Bible if you like - and due to this some people oppose the idea of adding new words into the dictionary and the whole idea of language change itself. These people are called prescriptivists and they unflinchingly believe that language should adhere to a set of rules and should not deviate from them. The idea behind their belief is simple – if we all speak the same language then it means that we can communicate much more efficiently and effectively. In theory, this is a good idea but one of the main reasons why the prescriptive attitude is flawed is that if we had adopted it, wouldn’t we all still be speaking in the same English that Samuel Johnson documented in his dictionary?

Those who do oppose this fixed idea are called descriptivists. Descriptivists have a more relaxed view with regards to what happens to the language, so long as it maintains its original purpose of conveying one’s meaning. They would welcome the new words and the process of language change as they believe that it is a natural and unstoppable process. If people use it, why not include it? Perhaps this is the way it should be - Professor David Crystal likened it to the constant ebb and flow of the tides of the sea – no matter how hard we try, we can’t stop it and nor should we attempt to. Instead, we should simply embrace it.

So why are prescriptivists so against these inclusions? As Jean Aitchison, a Professor of Language in the faculty of English Language at the University of Oxford metaphorically put it, they like to represent language as a perfect castle. These new words that have been added to the OED would be seen as corrosion by prescriptivists. Now, this argument requires the assumption that language at one point was perfect and could in no way be improved. It would mean that we couldn’t create new names for any new creations or create new words in general. That catchy tune that’s been stuck in your head for the past week – wouldn’t it be great if there was a word to describe such a song? Lucky for you, earworm was included in December 2011. It would have been a shame to miss out on such a word.

These language sticklers would also argue that language users are becoming far lazier with their language usage. This is suggested again by Aitchison to be akin to putting a damp spoon back into the bowl of sugar as if you do this, it’s just going to collect more sugar and this is used to represent the spread of language variation. If people start to use a new word more frequently or suppose a noun is being used as a verb, these trends soon catch on and before you know it everyone is using these new creations. It’s happened with Google as we now google (added to the OED in the June of 2006) things and I highly doubt anyone would find this example of conversion lazy. If anything, it’s linguistically economical. They are also keen to liken language change to an infectious disease.  A malicious, malignant and malign disease designed to mutilate and maim anything that stands before it as it spreads from person to person. It is again, simply a misunderstanding. Yes, language change spreads from person to person but the idea that prescriptivists hold that language change is a dark, malevolent corruption spreading through our language is misinformed. It is simply as harmless as the aforementioned damp spoon.

The Future of Our Language

If there are additions to the dictionary, at some point there are also going to be words that are removed. For example, have you ever had a brabble with your siblings over who got to sit in the front seat of the car? Maybe you had to visit a growlery after? These two words meaning a “petty argument” and a “secluded place where one can go in a bad mood” respectively were removed from concise edition of the OED. This is a perfect example of language undergoing a survival of the fittest type procedure - use it or lose it. It also highlights how language changes according to the needs of its users – a process known to linguists as functional theory. As society evolves, so does its language.  Even though the above examples are lively and vibrant, they are certainly not used in the common vernacular and sadly this means that they no longer have a place in the concise edition of the dictionary. However, fear not as this without doubt means that words equally brilliant or even more so have taken their places. If it were left down to the prescriptivists, we would all have a dictionary that consists of 20 volumes and would spend hours rummaging through words that haven’t seen the light of day since the 17th century.

With all this being said, I can see why some believe that language change is a bad thing because in some cases, it certainly doesn’t just provide only benefits. For example, in small village communities, language change may somewhat cause a loss of identity as it means that the words that their relatives have been using for many previous generations will slowly fade out of existence. As language change isn’t purely about the words which we use, another potential negative side effect of change is that it might cause confusion. What if we dropped apostrophes? Would we be able to tell apart the different meanings? It’s already happening – Waterstones have recently removed the apostrophe from the front of their shops and as a result this has provoked a response from punctuation enthusiasts. So, why did Waterstones feel the need to remove the apostrophe? They’ve stated that Waterstones without the apostrophe is “in a digital world of URLs and email addresses, a more versatile and practical spelling”. How much confusion has this actually caused? Absolutely none.

If a large book retailer such as Waterstones is adapting to society’s needs in such a way, it does show that language change really is unstoppable. The events occurring around us such as technological advancement and new inventions are the catalysts in this naturally occurring reaction. Either way, it is inevitably going to be more beneficial to accept and embrace that language does change and be pleased that we can’t do anything about it. In fact, we should almost celebrate the diversity and creativity that language change brings. Yes, we might end up losing a few useful words or words that are quite close to us, but the chances are that you haven’t used these words in a very long time or know what they mean and as for any punctuation changes, it simply requires common sense to work out any potential ambiguities. So, is this form of language change a bad thing? LOL, no.

Great page, Paul! I enjoyed your comments and your examples.

Tolovaj - Very much so. There's no order without balance.

2uesday - Whether we like it or not, language will eventually have to change - it's the way of nature.

Jo - I agree, while laziness is always good some of the time, it's always great for a language to be able to expand.

Calanon - Haha, you've got to end with a bang!

I think I'm greedy. I want ALL of the words!

This is amazing, I'm not sure I feel text speak should be added to the dictionary as it takes away the mystery for those who don't know it while those of us who do enjoy the divide. Very interesting and refreshing article. Looking forward to more of your work. :)K

I really enjoyed reading this! You explained the issues very well.

I've seen it on both sides of the divide. There has been some movement in Welsh over the centuries, but fundamentally modern Welsh speakers can make sense of quite ancient text.

On the other side of the border, even century old English can cause some problems for those used to its modern variant. Old English is practically a foreign language.

On balance, I'd say that I'm a Descriptivist. 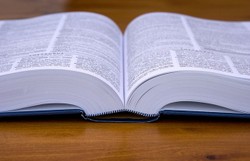 What is Duolingo? It's a website that's completely free of charge and provides you with an astonishingly easy way to learn a new language at a pace that you find convenient!
100%  32   21 Jeannieinabottle
Meaning of Words

It is funny how phrases or words go in and out of style for no real reason. I argue there are some words that are so great, we need to bring them back.
Loading ...
Error!